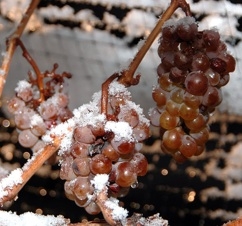 November 22, 2013, Kelowna, BC – An institute dedicated to promoting British Columbia’s wines says the industry could harvest the largest crop ever for a product that’s come to be known as liquid gold.

The British Columbia Wine Institute says 29 wineries have shown an interest in producing icewine this year, and as much as 1,000 tons of frozen grapes will be harvested from Okanagan vineyards.

The institute says if that happens, the harvest will be the largest on record.

The institute says 20 wineries had begun their harvests as of the morning of Nov. 21, already bringing in about 446 tons of grapes, with more picking to come.

“This is the earliest icewine harvest in Canada for Jackson-Triggs and Inniskillin,” says Lori Pike-Raffan, company spokesman for the South Okanagan winery.