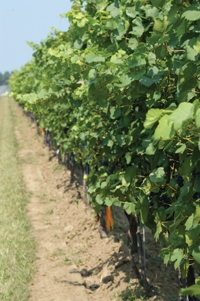 There are many factors to consider during the growing season that will affect a plant’s winter hardiness. Crop level and size is one factor; plant stressors such as drought conditions or too much water are others.

Cold injury is the result of several factors such as the transition from native hybrid varieties to V. vinifera, which are less cold hardy.

“Planting on marginal sites is becoming common. This leads to some unique growing conditions and challenges,” he says.

Grape growers are experiencing the effects of climate change as well. Extremely cold winters have been experienced in recent years, accompanied by large temperature fluctuations during the critical acclimation and de-acclimation periods.

“This leads to vine and crown injury,” he says.

With crown injury, the plant appears to start the season well but later experiences dieback as water demands increase.

“The winter survivability of woody fruit crops grown in temperature regions consists of two components, namely. avoidance of and tolerance to cold temperatures,” explains Willwerth. “The choice of site and cultivar, along with appropriate vineyard management practices, impacts on these two components.”

The avoidance of cold injury relies on the proverbial “location, location, location,” stresses Willwerth. When choosing the site, growers need to consider the latitude and longitude of the area. Another consideration is the proximity to large bodies of water. “Lake Erie tends to freeze over in the winter so less protection is offered,” he says.

Avoidance of frost pockets is also important. “This includes the base of slopes and low elevation areas where cold air can pool. Areas where air flow is restricted by vegetation should be avoided,” Willwerth says. He adds the use of wind machines during the winter may be helpful.

Willwerth defines tolerance and cold hardiness as “the ability of plant tissue to survive freezing temperature stresses.” This is limited by the plant’s inherent genetic potential. For example, V. riparia is tolerant to -40° C., while the V. vinifera can generally tolerate -20° C.

“Location matters,” he says, noting the dormant vines in the northeast tend to be more cold tolerant during the winter months than those grown in warmer regions that have milder winters. “The colder the region, the closer the vine will get to its maximum genetic cold hardiness.”

During the 2009 growing season, “dead arms” were found in Riesling at some sites with some bud damage to other cultivars. CCOVI researchers attributed this to cumulative years of winter injury in perennial wood and possible phloem damage caused by a warm spell in March followed by a return to  -6° C temperatures in April.

Hardiness begins to develop in the acclimation stage that starts as early as August and continues through the fall and winter period. Maximum hardiness is achieved from December to February. “Tissue damage tends to occur if there is a warm snap during January-February and it then returns to extreme cold temperatures,” says Willwerth.

De-acclimation is the shift in the plant from cold hardy to cool tender, explained Willwerth. De-acclimation occurs more rapidly than acclimation, and starts at the end of February. This process is dependent primarily on air temperatures.

There are many factors to consider during the growing season that will affect a plant’s winter hardiness. Crop level and size is one factor; plant stressors such as drought conditions or standing water left unchecked in the field are others.

For crop level, excessive fruit can delay sugar accumulation and shoot maturation. It will also deplete plant reserves for the winter. Crop level is cultivar and site specific, says Willwerth.

“You need to balance vegetative growth to maximize cold hardiness, and cluster thinning, where warranted, can improve hardiness,” he says.

Canopy management is another factor and includes shoot density and position, which can be optimized through double pruning. Special practices to consider are retaining suckers and double trunking, both of which provide options down the road should one system fail.

“Multiple trunks is akin to using spare parts,” he says.

Willwerth said researchers in B.C. have found that a crop level of 36 shoots per metre appears to work well for them. This amounts to one cluster per shoot, which means less fruit but greater hardiness. Less beneficial was 16 shoots per metre, or two clusters per shoot.

“This information, of course, is not absolute and is specific to B.C. This could vary based on cultivar, site and viticulture practices,” he notes.

“Research in B.C. has shown that cold hardiness can be favoured by low trellis systems,” says Willwerth. Buds consist-
ently exposed to low temperatures, such as those on the lower positions, may be more hardy than those exposed to higher temperatures at the higher positions.

CCOVI research will continue through 2010 and 2011 using differential thermal analysis (DTA) on buds and vines to determine cold hardiness through the entire dormancy period. The tests will be conducted on Chardonnay and Cabernet franc varieties at sites in Niagara, Lake Erie’s north shore region, and Prince Edward County.

The data gathered will be specific to each area. “We’ll add more cultivars later, as the research progresses,” says Willwerth.
“To date, all of our research suggests that good winter hardiness complements a well-balanced vine,” says Willwerth.

Updates on this research are available at www.ccovi.ca/vine-alert. ❦