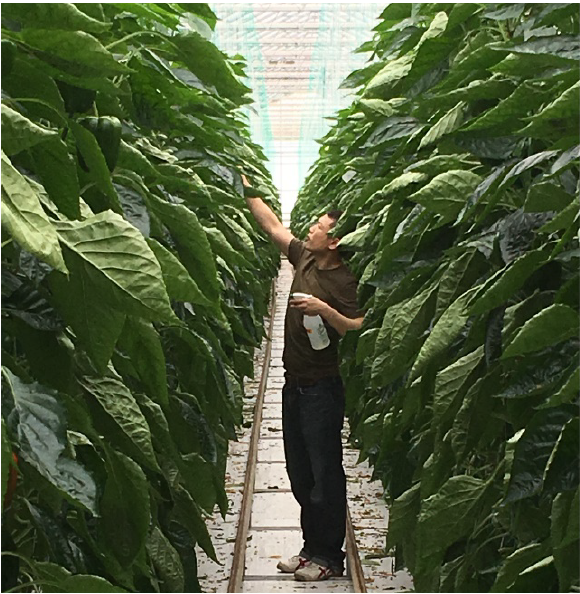 Vineland Research and Innovation Centre (Vineland) has discovered a new general predator to help control pests associated with increased crop diversity in Canadian greenhouses. This discovery was made thanks to a five-year project funded in part by the Government of Canada under the Canadian Agricultural Partnership’s AgriScience program, a federal, provincial, territorial initiative in collaboration with the Université du Québec à Montréal (UQAM) and the biocontrol producer Applied Bio-nomics Ltd.

“This new predator, Anystis, is effective against several key greenhouse pests by controlling thrips and spider mites and suppressing aphids. As a generalist predator, Anystis also preys on Echinothrips and mealybugs for which no biocontrol agents exist,” said Rose Buitenhuis, Vineland’s senior research scientist, biological control. “Anystis is functionally compatible with commonly used biocontrol agents including aphid parasitoids and Neioseiulus cucumeris, and is a valuable addition to an integrated pest management (IPM) program.”

Despite the predator’s cannibalistic tendencies, Vineland’s research team, led by senior research technician Taro Saito, was able to develop two high-performing rearing systems for Anystis in a laboratory setting, with costs similar to other commonly used biocontrol agents. The research team also determined adult predators can be shipped from the insectary to the customer with a low mortality rate.

Last spring, Vineland transferred the predator to Applied Bio-nomics for scaling up the mass-rearing systems and commercialization.

“Anystis is an exciting new predator. It appears to be a true generalist and is not intimidated by some of the toughest pest’s natural defences, such as wax and webbing. It is easy to see and scout, helping growers see their activity. And, it is always hungry, a very good trait,” said Brian Spencer, president of Applied Bio-nomics. The company is now successfully rearing Anystis with a limited number of mites available to growers to try.

Findings from the research project also determined the adult predator stage is the best for release in the crop, as Anystis starts controlling pests and reproducing immediately, leading to proper establishment. Providing supplemental food (either Artemia cysts or Ephestia eggs) sustains the predators when prey is scarce.

The use of Anystis as a biocontrol agent has already been validated in commercial greenhouse trials of gerbera and sweet pepper. Additional research will be undertaken to assess the effectiveness of Anystis in several other crops including greenhouse strawberries. Recent trials with Niagara College also showed promising results for use of the predator in cannabis with the intention of controlling aphids, one of the most problematic pests in this crop.

Anystis is the second new biocontrol agent to come out of this research project. The first was the Syrphid fly, an aphid predator developed by UQAM and available through Applied Bio-nomics.