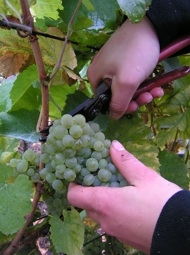 The research, reported in the open access journal Genome Biology, could be used to help identify and breed grapevine varieties better suited to climate change and improve berry and wine quality.

Much to the inconvenience of winemakers and drinkers, grapevine berries vary within berries on vines grown in different vineyards and in different vintages. This means they may ripen unevenly, affecting the quality of wine from place to place and from vintage to vintage. But although the differences are known to reflect environmental change and differing grape-growing practices, the molecular mechanisms underlying this variability are unclear.

To address the issue, Silvia Dal Santo from the Plant Genetics Lab headed by Mario Pezzotti of the University of Verona, Italy, grew a single grapevine clone (Vitis vinifera, cultivar Corvina) in 11 very different vineyards across the Verona region. They then harvested berries at various stages of ripening, across three consecutive years, and used microarrays to study patterns of gene expression across the genome, linking interesting finds to the grapevine’s DNA sequence.

The team was able to highlight various environmentally sensitive genes thought to influence berry quality. These included genes regulating metabolic pathways – such as the production of phenolic compounds which contribute to taste, colour and mouth-feel of wine – that were highly sensitive towards different climates.

It was hard to pick out generalised gene expression signatures reflecting common environmental conditions or viticulture practices, instead patterns of gene expression clustered by year of growth. However, during a typical climate vintage, the authors were able to link sets of differentially expressed transcripts to particular environmental attributes or specific agronomical parameters, such as the vine trelling system.

They also showed that the early stages of berry ripening are most responsive to changes in environmental conditions, highlighting a critical period during which the winegrower is most vulnerable to the whims of the weather and, in turn, may have a great impact on the entire ripening course under different weather conditions.

Environmentally non-responsive genes, constant across vineyards and weather conditions, were also identified. These, the authors suggest, could be developed into universal markers to monitor grape ripening in the field, helping to optimise picking times and standardise wine quality.

The grapevine is the most widely cultivated perennial fruit crop in the world, with 67.5 million tons of berries produced in 2011. Climate change is expected to significantly impact agriculture, and the wine growing industry, in the near future. The new findings provide a good starting point from which to further explore the molecular processes governing berry development, and highlight the environmentally-dependent and agriculturally-important factors essential for identifying existing or breeding new, weather-tolerant grapevine varieties.