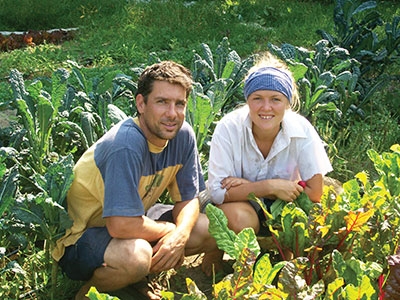 Robin Turner (left) and Jess Weatherhead started Roots and Shoots certified organic farm in 2010 after a landowner approached Robin looking for someone to farm his land.

The path to organic vegetable farming for Robin Turner was a happy accident. After spending his twenties traveling in Asia and teaching English, he had returned to Canada to study environmental science.

“We had to take some agriculture courses as part of the degree, and it really opened my eyes to the problems with our food system,” he says. “I met some people who were farming organically and once I saw what their lives were like, it sold it for me.”

“I like what an organic farmer does on a day-to-day basis,” Turner explains. “It’s hands-on and mechanical and interacting with living things, but there’s a social element and a business element, all of which provide a diversity of challenges all the time. It’s constant problem solving and I really like that.”

Since finishing university in 2004, Robin worked on and managed organic vegetable farms in Montreal, Boston and Ottawa. His partner (and farm manager) Jess Weatherhead has a degree in history and English literature, and has been farming her entire life. The path to their present farming operation, started in 2010, was also a case of happy accident. Robin was involved in another farm business in the Ottawa area, and was approached by a landowner looking for someone to farm his land.

“I actually wanted to be even closer to the city, but I went and took and look, and decided to take him up on his offer,” Turner says.

Roots and Shoots certified organic farm was born. It is located just south of the Ottawa airport, a 20-minute drive from downtown.

“Being this close to a major centre is pretty important,” Turner explains. “It’s easy for media outlets to come out and do a story, or call me for my opinion on a topic, and media attention is critical for a new business of any kind. It’s a short drive for people to come and visit our farm store, and not far for us to take the harvest to farmer’s markets.”

Their CSA business has grown enormously, from 60 shares in 2010 to 250 in 2013. Customers pick up their weekly share at a central drop point. The CSA aspect makes up about 60 per cent of their profits, with farmers market sales contributing about 30 per cent, with remainder from their farm store, grocery stores and a few restaurants.

Turner and Weatherhead rent the land they farm, which is working out well.

“It can be tricky to rent land, especially if the property is also being used by the owners,” Turner says. “In this case, the owners use all the barns for their business, and we use temporary structures for our equipment. They’re very respectful of our use of the land, and that’s really important. You need to have autonomy in what you’re doing.”

In 2011, the house beside the property just happened to come up for sale, and the couple snatched it up.

Turner and Weatherhead grow 10 acres (irrigated and tile-drained) of assorted certified organic vegetables, and also use three high tunnels (one Harnois 35 by 100 feet and two Hol-Ser 30 by 100 feet). In spring and summer, the tunnels house trellised tomatoes, cucumbers, peppers, and eggplants. In the fall and winter of 2012 and again last year, the couple grew spinach, kale and lettuce in the high tunnels, after doing a great deal of research about cold temperature cultivation.

“The profit of our farm is of course mainly in the warm months, but the greens are important in that they help us move our root crops through the winter,” Turner explains. “Even if you have a little bit of fresh organic greens to offer, people will also buy carrots, onions, potatoes. It keeps us in touch with our customers and the winter greens business also helps keep our employees working for longer.”

Cold high tunnel use
The high tunnel greens are seeded in September to ensure the plants are well established by the time it gets really cold. Then, they are covered and harvested on days when the ambient temperature reaches 3 Celsius.

“Growing them was easier than I thought it was going to be,” Turner says. “You just have to realize it depends a lot on the weather and how much work you want to put into it. For optimum performance, the plants need sunlight but you need to protect them at night by covering them. It’s a bit of a pain to uncover and cover them again on sunny days, and you can also leave the row covers on during the day, as the material does transmit light. But obviously, direct sunlight is better.”

“We were lucky that first year, because the day before each planned delivery was warm and we could harvest,” he explains. “This winter was just too cold, from late November onward, in this area. You’re at the mercy of winter and cloud cover and just have to live with that.”

Watering in the winter is a challenge, and the farm has no frost-free hydrants at the tunnels.

“Last year, we just watered the latest in the season that we could and then again in the spring,” Turner notes. “You also have to keep the tunnels clear of snow so that the light can come through. We use a snow rake, which is hard on the plastic, but there isn’t much alternative.”

“The amount of machinery we have has increased a lot and we’re always investing profit back into equipment and infrastructure to make things more efficient,” Turner explains. “We have several tractors, a mechanized seeder, mechanical transplanter, mulch layer, potato harvester, and bed-making implements. Some organic farmers are resistant to mechanizing, but there is so much out there that makes things so efficient.”

Turner says the market for organic veggies is extremely strong, and they could have easily sold another acre’s worth of carrots this year.

“We have lots of applications every year, but retaining people is a challenge in the way that we have to make good money in order to provide a better wage to keep great employees coming back,” Turner says. “It pushes you to scale up and focus on efficiency and profits, but I enjoy those challenges of looking at mechanization options that will allow us to do that, and the management aspects.”

Turner says he was pleased to be awarded with the Premier’s Award for Innovation. It meant more media attention and the money was appreciated.

“It’s a bit vexing when someone says ‘you must work so hard,’ and yes, farming is a lot of work, but any new business or challenging job is a lot of work,” he says. “It’s very satisfying to see how you can structure things so that you make a good profit, if you do it the right way, in the right markets.” ❦