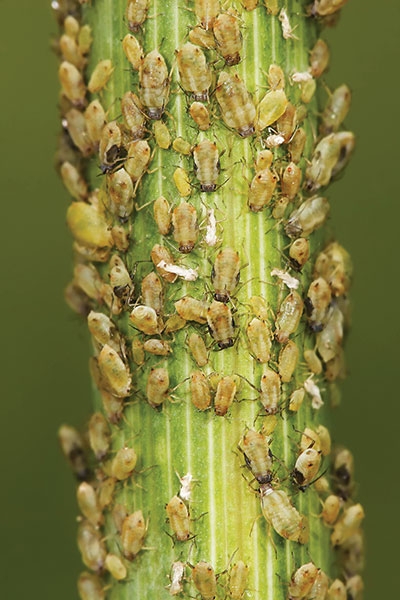 Aphids transmit PVY. In fact, any aphid that probes the leaf while determining if the potato is a suitable host can spread the disease.

Zebra chip is a potato disease that was first observed in Saltillo, Mexico, in 1994, and later discovered in the U.S. in 2000 in south Texas in the lower Rio Grand Valley area. Zebra chip has now spread throughout Latin America and has been reported in at least eight U.S. states, including Arizona, California, Colorado, Kansas and Nebraska. In 2011, it was also reported in the Pacific Northwest – Oregon, Washington and Idaho. It has also been found in New Zealand. Between 2004 and 2005, it is estimated that zebra chip cost growers and processors millions of dollars.

Symptoms of zebra chip
“The thing about zebra chip is that it causes both foliar symptoms and tuber symptoms,” says Dr. Phillip Wharton of the University of Idaho’s Aberdeen Research & Extension Center.

Foliar symptoms include leaf curling, yellowing, purpling and distortion. Symptoms may also include swollen nodes, which result in a zigzag pattern or stems. In the case of a heavy infection, leaves can become scorched and purple.

In the tubers, the most common symptom is discoloration of the vascular rings.

The disease has been named “zebra chip” is because potato chips made from affected tubers display dark stripes and streaks, like those of a zebra.

“This could be confused with some viruses that you can find in potatoes, but classically you see a slice of necrosis of the vascular tissue,” says Wharton.

Zebra chip vector
The insect that transmits the zebra chip pathogen is the potato/tomato psyllid, or Bactericera cockerelli.

Native to North America, the potato psyllid has also been found in Mexico and as far north as southern Canada. The insect looks like an aphid, with slightly different characteristics. It overwinters in deserts along the border between the U.S. and Mexico. As the season warms up, though, it spreads to the northern regions, as far as British Columbia and Saskatchewan.

“There are other species of psyllids that can appear on the potato, but don’t necessarily transmit the disease,” he says. “One thing to note is that just because you might find psyllids does not mean that you’re going to find zebra chip or the pathogen. Not all potato psyllids have the bacteria in them.”

To control zebra chip, the potato psyllid vector must be managed. “The problem is that even with insecticide the potato psyllid is difficult to manage,” he says. “One of the reasons for that is that you need good coverage. Psyllids tend to be on the underside of the leaf. The other problem is that the different stages of their life cycle require the use of different insecticides as chemicals that control the adults don’t necessarily control the larvae or kill the eggs.”

What are the implications for Ontario growers? Although potato psyllids have not been found east of the Mississippi river yet, as the weather patterns warm up, there is a risk of migration further north. In North America, for the most part, wind and hot temperatures drive psyllid migration in late spring. Although current weather means the chances of psyllids migrating to Ontario are slim, if they are introduced to Florida they could be blown up the east coast and into Ontario.

“It’s still a very young disease, and there’s still a lot to learn,” he concludes.

PVYntn
PVY, which stands for potato virus Y, is also known as “common mosaic” or “potato severe mosaic.” The original strain, PVYo, was the only one found in North America, that is, until very recently when PVYn was reported as well.

“The difference between PVYo and PVYn is primarily their pathogenicity toward tobacco,” says Wharton. “PVYo causes a mild mosaic reaction whereas PVYn leads to mortality. Their
impact on the potato is basically the same.”

Until recently when it was confirmed in North America, PVYntn was only found primarily in Europe.

“PVYntn is a strain of PVYn that causes necrosis on tobacco, but also causes flecking and ringspot symptoms in tubers. The ‘ntn’ stands for ‘PVYn – tuber necrotic,’ ” says Wharton.

In PVY infections, typical symptoms include stunting and foliar mosaic, which can be seen in Russet Burbank and Red Norland varieties. A number of other potato varieties, though, display mild or no symptoms at all when contaminated with the virus. These varieties, which are often referred to as “PVY carriers,” include CalWhite, Gem Russet, GemStar Russet, Russet Norkotah (all strains), Shepody and Silverton Russet. In some varieties, such as Ranger Russet, PVY infection may cause severe foliar damage, wilting and even death of the entire plant, a range of symptoms that are characteristic of the “ordinary” strain of the virus, or PVYo.

“The PVYn symptoms are relatively similar, but this new strain of the virus causes milder foliar reactions and there are some latent symptoms as well,” he says.

“The main problem with them is that although they cause less severe foliar symptoms,” she says, “they do cause necrotic tuber symptoms. PVYntn can cause severe internal necrotic ‘circles’ in tubers making them unusable for anything else other than potato flakes.”

With PVYntn, symptoms include mild mottling and tuber necrosis.

“More work needs to be done on the PVYn and PVYntn strains, but so far it looks like you can get up to 50 per cent losses, depending on the cultivar, but the trouble with these varieties is then you also get tuber loss,” he says. “So you start with low yields and they’re reduced even further because you have tubers that are unsellable basically.”

The first and most important step in the management of PVY is buying disease-free seed, he says. As a seed grower, you should never purchase seed with a little amount of virus thinking that field rouging will bring a lot into certification standards.

“It’s hard to visually identify all of the infected plants,” says Wharton. “Walk your fields and remove any infected plants. The earlier in the season that infected plants are rogued out, the lower the amount of spread.”

“As a commercial grower, you should never buy a seed lot at a bargain basement price when it has a high reading of greater than two to three per cent of the virus because you’re not doing yourself any favours if you do,” he continues. “It can lead to high yield losses.

“In Idaho, two per cent is the threshold for the re-certification of seed potato, so if you have less than two per cent PVY then you cannot use that as seed,” he says. “It has to go to commercial use.”

“Research has shown that some of these new insecticides tend to alter the behaviour of the aphids and reduce the spread of the disease, but will not reduce the amount of the infection,” says Wharton. “So it’s more of a barrier than a cure.”

In Idaho, some farmers have applied crop oils from July until vine kill, which has been shown to interfere with the spread of the transmission.