How one Ontario market maximized profit, margins by minding the numbers.

Your Farm Market, pictured, in Woodstock, Ont. The seven-month-a-year market employs 42 people and has more than 110,000 customers. Photos courtesy of Bernia Wheaton.

Every farm market has one. Every farm market needs one. But does every farmer use a point of sale [POS] system to its full potential? Likely not. For many, a POS simply means a debit machine. However, if that’s all it’s regarded as, businesspeople are doing themselves a great disservice, according to one woman who’s had success like no other, all thanks to her POS.

Bernia Wheaton is the market manager at Your Farm Market [YFM] in Woodstock, Ont. The 10,000-square foot market operates seven months of the year and retails more than 190 products. The hyperlocal market employs about 42 people during the season.

When you have 112,000 customers coming through your doors each year, it’s important to have an iron-clad grip on your numbers, especially when margins run as tight as they do in the food business.

Her secret weapon is ShopKeep, an app that costs $100 per month, yet has saved her thousands. She racks up the savings and efficiencies by poring over scads of data that boost YFM’s bottom line.

“The amount of time it saves me, it is worth every penny that we pay in value,” she says. “As far as scalability, it’s great for entry level, but I find that for the size of business we are, ShopKeep is where we really need to be.”

“The amount of time it saves me, it is worth every penny that we pay in value,” she says.

What she enjoys most about the app is its “live data.” A relatively unknown term, it’s a simple denotation to acknowledge how ShopKeep quite literally processes Wheaton’s data points in real time. 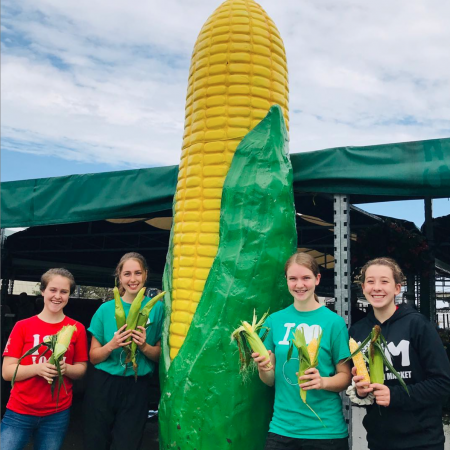 For YFM, a seven-day-a-week retail with huge peaks and valleys in clientele coming in and out, tracking and measuring Wheaton’s metrics is critical for success.

Among other tracking, ShopKeep manages Wheaton’s hourly sales, daily sales, week-over-week, year-over-year and month-over-month sales. Other key items Wheaton scours include amount spent per customer, time of day flow, top-selling items, till cash, debit versus cash transactions and more. If it sounds like a lot, it is. However, that’s exactly what Wheaton needs.

The market’s five biggest sellers are strawberries, sweet corn, peaches, beans and pies. All these popular items are linked to a stock trigger so when a certain number of units are sold, Wheaton’s phone immediately receives a notification. From there, she can quickly direct staff to restock the shelves. She is also able to set the notices to a dollar value or units remaining prompt.

It’s not just the data, though. One of the owners, Don McKay, doesn’t overly concern himself with the app. He uses that gut instinct only decades of market experience can afford. The two of them are a good mix of head and heart because of the setup they have, and it’s a rarity they run out of any product. Nothing usually stays on the shelf for more than 30 hours and 80 per cent is gone by 6 p.m. each day, only seven hours after being set out for customers.

That medley of number crunching gives Wheaton very accurate estimates she needs when she calls one of her 40 farmer suppliers for additional products. 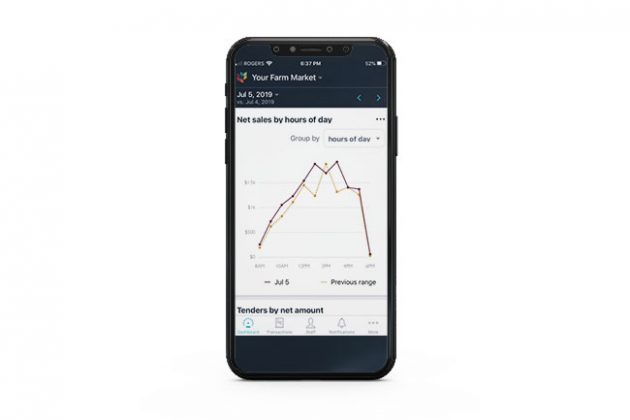 Sales at Your Farm Market in Woodstock, Ont., utilizes an app, ShopKeep, as its point of sale system. Market manager Bernia Wheaton says the simple program has saved the company thousands in efficiencies.

“Sometimes I have to place an order for my meat . . . I can quickly look at my phone and look at one week of sales so I know how much I need to re-order,” she says.

The live and archived data that she so heavily relies upon always paints a picture, but the interpretation determines whether or not she’s looking back at a masterpiece.

The market’s busiest time of year has always been Thanksgiving, so much so that it has its own ordering system and binders. The market can just about outfit a family with everything they need for the holiday, including the pièce de résistance: pie.

In 2019, Wheaton was preparing for YFM’s annual pie order and, being fairly new on the job, went back into her POS’ data and reviewed what was sold last year and prepared to place an order.

There was just one problem. The data said to order 800 pies. On a good weekend YFM would turn over 200 pies and now the POS was suggesting quadruple should cover off the holiday weekend.

Wheaton laughed to herself, obviously she punched in something incorrect. She re-did it. 800. Hmmm, that’s strange. She did it one more time on a day-over-day basis of last year’s sales and it once again displayed 800. Employees looked at her as if she was crazy when they heard the number.

“In my brain, if I would have just guessed, I would have felt like I was walking out on a plank if I had to order 400 pies,” she says. “I felt sick having to order that, but I said, ‘OK, I am going to trust the data.’”

Two trucks set off to Anna Mae’s Bakery and Restaurant to pick up what equated to nearly one tonne of pies.

It was a harrowing stretch of days for Wheaton, but she was glad she ultimately put her trust in the numbers.

“I know I should have trusted the data,” she says. “It was just such a huge number that it just felt like it couldn’t possibly be accurate, and it was 100 per cent accurate. In hindsight, I’m really glad I trusted the data.”

“I know I should have trusted the data,” she says. “It was just such a huge number that it just felt like it couldn’t possibly be accurate, and it was 100 per cent accurate. In hindsight, I’m really glad I trusted the data.”

It’s not only the hard data that ends up coming in handy. Often, the visual response of a consumer, or even social media interactions, have proven to be an extension tool of a well-run POS.

Last September, McKay placed an order for raspberries while forgetting about an already-in-queue order. Wheaton had to think quick about how to manage double the pints of raspberries so they didn’t go to waste the next day, Friday the 13th. She quickly thought up a 3/$13 promo for the ominous calendar marker and pushed it out on social media. Thankfully, the promotion went over well on short notice. Based on the success, she tried it again on December 13th, this time with preserves and salad dressings. That day, the special deal was the number one seller and a 72 per cent sales increase from the previous Friday. 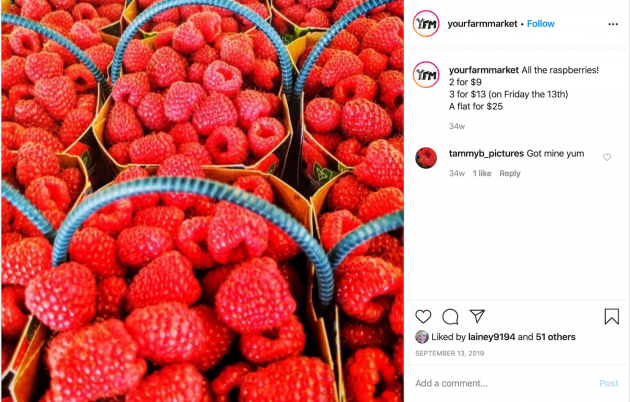 Wheaton created a “three for $13” promo for Friday the 13th when the market faced an unexpected surplus of raspberries. The promotion was successful and they repeated it with preserves and salad dressings next Friday the 13th. Photo courtesy of YFM.

“Those followers saw it, reacted and made their purchase,” she says of the Facebook and Instagram marketing plan. “Sometimes marketing is a little bit of a gut instinct, but to have the data to validate it, it’s a really interesting phenomenon. The data in the POS very clearly showed that our marketing was directly linked to the data results.”

“Even if you’re starting out, this is the time to start using your POS and integrating it into your business system,” she says. “If you can start it when you’re small, it will benefit you when you’re big. This set of numbers tells a story and sometimes I just have to look at it for a few minutes and see what it’s telling me. When you can do that, it becomes a very powerful tool.”

“This set of numbers tells a story and sometimes I just have to look at it for a few minutes and see what it’s telling me. When you can do that, it becomes a very powerful tool.”

Based on last year’s sales, she planned for a six per cent growth rate. However, the COVID-19 pandemic has already changed 2020 plans even before the market begins. New protocols will be implemented to screen staff, sanitize more frequently and implement social distancing. Moreover, YFM will utilize ShopKeep’s online ordering mechanism, which has already been well-received through customers via social media.

“It means we have to adapt and adjust, but we are working hard to serve our customers in the ever-changing situation,” she says.

Editor’s Note: This article originally appeared in Fruit and Vegetable’s May 2020 issue and interviews were conducted in early March.