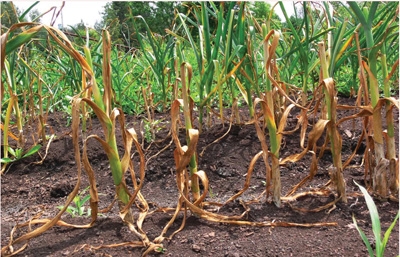 An example of a field infected with bulb and stem nematode. The infected plants turn yellow, then brown, then shrivel up and die. Michael Celetti, pathologist, OMAFRA

Despite their reputation, the vast majority of nematodes are not only considered beneficial but also as organisms vital for maintaining soil and plant health, says Becky Hughes, University of Guelph, New Liskeard, Ont. The microscopic worm-like organism has thousands of classifications but a few hundred species are considered plant parasites.

“When you think of a nematode you tend to think of the ones that live in the soil such as the root knot and root lesion nematode. The one of concern for garlic growers is the bulb and stem nematode that also eats leaves and lives within the bulb,” she said. The persistent pest, identified as Ditylenchus dispsaci, was identified in California in the 1960s and in Ontario some 10 years ago. This pest threat was initially thought limited but it has caused significant damage in recent years and some growers have lost whole crops. Intensive research into how widespread this pest is in Ontario began about two years ago. This particular nematode lives in the plant and feeds on the leaves, stem and bulb so it can be easily spread with the seed or any other part of the garlic plant or dried plant debris. It can also survive for years in the dried trash stuck to dirty tractors, equipment and storage boxes. When access to soil is available, the pest can return to the soil and live for many years without a host. Heavy clay soils give it greater longevity compared to sandy loam. There are also a number of strains or races of this pest. Looking at the signs and symptoms, Hughes says it causes stunting and yellowing plants that die prematurely throughout the season. If the plant was infested at planting time, it will likely appear as a dwarf with a thick distorted stem and small leaves. The bulbs can be without symptoms, however, the root plate can rot separating the bulb from the root system. This condition causes the bulb to rot, and the advent of secondary infections such as fusarium, hampers pest identification. Plants with this condition are easily identified by their yellowed, dwarf appearance and when pulled, easily break off from the base

Looking at the life cycle, Hughes says the pest actually burrows from the leaf down to the bulb and root plate where it develops and feeds. As the bulb rots and the pest reproduces, juvenile nematode offspring move into the soil and swim to a new place to live. These juveniles swim well not only in wet soils but also in the film of water on plant tissue and the soil surface. “It really only takes one infected plant to infest a field,” she said

“To make things complicated, bulb and stem nematode has a wide range of hosts. It will grow in corn, bean, rye, onion, peas, corn and strawberry crops. It also has a range of 300 to 500 species. To complicate things more there are about 30 known races and likely more that attack a specific host or specific group of hosts. We have found that the race that attacks onion and garlic tends to stick to the onion family and does not attack field crops like canola or alfalfa. And there is one race that attacks garlic and strawberries that is totally unrelated. We still don’t know all of the races that are out there,” she said

In 2010, working with the Garlic Growers Association of Ontario (GGAO), they created a study to track the extent of infestation across the province and to identify the prominent races. Nothing similar has been done since 196
In this study, researchers collected 10 garlic bulbs from growers across Ontario. Growers in turn, completed a questionnaire on seed sourcing and cropping practices.

“When we started collecting samples some of the garlic looked too nice but that changed later in the season,” she noted

Infected bulbs were sent to the lab to identify the race of nematode. In a misting chamber, the nematodes will actually crawl out of a dug garlic bulb after about 24 hours, and the technicians can then identify and count their numbers in solution, she said

From their survey results, the research team collected 123 samples from 79 farms in 33 counties. Of these samples, 59 per cent were of the Music variety, and 73 per cent of all the samples had bulb and stem nematode

Of note, Hughes said there tended to be a higher infestation rate in south-central Ontario where the highest number of samples were collected. She also noted that 18 per cent of the Music variety had no nematode infection.

“They were clean,” she said.

From their recommendations, “a good crop starts with clean seed, and it’s a good idea to get a sample of your seed tested by the University of Guelph before you plant it,” she said. For cleaner fields, Hughes said Cutlass oriental mustard does a good job of nematode suppression. She also suggested a minimum four-year crop rotation with no Allium crops until the race of the nematode can be identified. “We suspect it’s all the same race of bulb and stem nematode but we’re not sure at this time,” she said. Keep infested seed separate from clean seed both in the field and in the storage area, and always plant the clean seed on the higher ground. Thoroughly clean and disinfect your equipment and the storage area when finished. Some growers might consider using the hot-water seed treatment.

Hughes said she is no expert in this treatment so could make no recommendations, however, directions are available on the Internet and some careful growers have had good success. “The bottom line for all growers in the industry is to always consider growing clean seed,” she said. Hughes said the basics for the virus-free seed being developed in their laboratory starts at micro-propagation with clones established in culture by tissue or bulbils. These are tested for pathogens, and if clean, plantlets are established and multiplied

For stock plant maintenance, the clones of these stock plants are grown during the winter in the greenhouse. For production, plantlets are planted in a screened greenhouse and single clove bulbs are harvested in August, she said
Based on the results of their garlic study with the growers, and their laboratory work to test the efficacy of virus-free seed, Hughes says they hope to assist growers in the management of their crops with the proper identification of the problem.