Features Production Research
To wilt or not to wilt 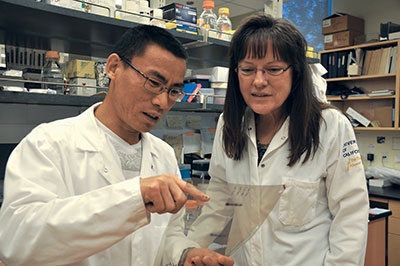 Plant breeders have long identified and cultivated disease-resistant varieties. A research team at the University of California, Riverside has now revealed a new molecular mechanism for resistance and susceptibility to a common fungus that causes wilt in susceptible tomato plants.

Katherine Borkovich, a professor of plant pathology and the chair of the Department of Plant Pathology and Microbiology, and colleagues started with two closely related tomato cultivars: Moneymaker is susceptible to the wilting fungus Fusarium oxysporum whereas Motelle is resistant. In their search for what makes the two different, the researchers focused on microRNAs, small molecules that act by regulating the expression of a variety of genes, including genes involved in
plant immunity.

They treated roots from the two cultivars with water or with a solution containing F. oxysporum and looked for microRNAs that were increased in response to the fungus in Moneymaker (where they would inhibit resistance genes) or decreased in Motelle (where they would allow expression of resistance genes). They identified two candidate microRNAs whose levels went down in Motelle after treatment with the fungus.

Because microRNAs inhibit their targets by binding to them, computer searches can find target genes with complementary sequences. Such a search for targets of the two microRNAs identified four candidates in the tomato genome, and all four resembled known plant resistance genes.

“When we compared the levels of the four potential targets in the two cultivars after exposure to the fungus, we found that all four were up-regulated in response to F. oxysporum – but only in Motelle; the levels in Moneymaker were unchanged,” said Borkovich, the corresponding author of the study.

To test whether up-regulation of the target genes was indeed what made Motelle resistant, Borkovich and her colleagues employed a virus-induced gene silencing (VIGS) system that can down-regulate specific genes in tomato. After exposure to F. oxysporum, disease symptoms, including leaf wilting, were seen in VIGS Motelle plants that silenced any one of the four genes. Although the symptoms were not as severe as in Moneymaker plants, this suggested that all four targets contribute to resistance.

“Taken together,” Borkovich and her co-authors conclude, “our findings suggest that Moneymaker is highly susceptible, because its potential resistance is insufficiently expressed due to the action of microRNAs.” Moreover, “because the four identified targets are different from the only known resistance gene for F. oxysporum in tomato,” they say, “there is much to learn about the immune response to an important pathogen family that infects numerous crop plants.”

“Next, we would like to find out if any of the microRNAs we identified are conserved in additional plant species that are infected by other F. oxysporum strains,” Borkovich said. “We are interested, too, in identifying the proteins and genes in the fungus that are important for regulating expression of these microRNAs in one cultivar but not the other.  In other words, what is it about the fungus that the plant is sensing?”

The research was supported by seed funding to Borkovich, Kaloshian and Han from the Los Alamos National Laboratory-UC Riverside Collaborative Program in Infectious Disease. The purpose of the seed project was to explore the molecular basis of plant diseases caused by microorganisms.