Drip irrigation has come a long way from plugged emitters and unreliable tubing, common occurrences during the past 50 years. Maybe it’s time more B.C. fruit and vegetable producers gave it a try. 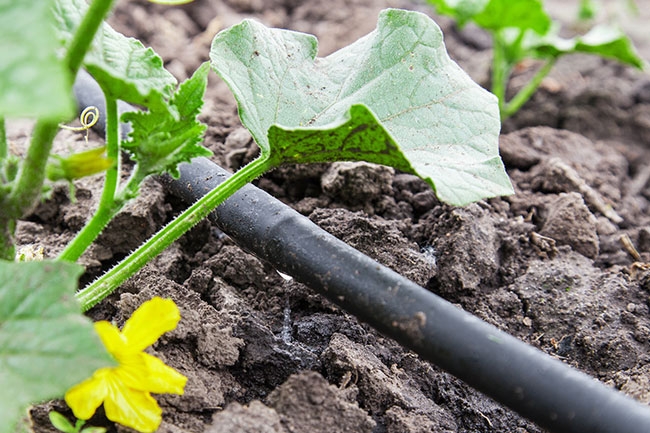 Of the 2,150 hectares of vegetables grown in the Fraser Valley, only 1.6 per cent use drip irrigation for watering. Photo: Fotolia

Drip irrigation systems have seen a lot of improvements since their invention in the mid 1960s. They are worth considering as a watering system, says Bruce Naka, an independent irrigation consultant who spoke to growers at the Pacific Agriculture Show in Abbotsford, B.C.

“In the beginning, people were scared by the problems,” Naka says. “The filter systems were difficult to clean, the spaghetti tubing was unreliable and the emitters often plugged.”

While the Okanagan tree fruit and grape industries have adopted drip irrigation, along with blueberry growers in the Fraser Valley, Naka would like to see more vegetable growers using drip systems.

“B.C. Ministry of Agriculture figures show that 94 per cent of blueberry crops and 64 per cent of raspberries are drip irrigated,” Naka says. “But 90 per cent of strawberries, 81 per cent of sweet corn, and more than half of the vegetable crops are watered using a travelling gun.”

There are costs savings with a drip irrigation system. Naka gave the example of a flat, 10-acre, irrigated field with the requirements to deliver 50 gallons of water per minute.  He says a travelling gun system would need 208 feet head or just below 90 lbs. of pressure. On a sprinkler system it would be less, with 180 feet head and 75 lbs. pressure.

“But if we were looking at drip irrigation, we can operate that system with only 104 feet of head and 30 lbs. of pressure,” Naka says. “In the end, you would require four horsepower for the travelling gun, but only 1.88 horse power for the drip, so 50 per cent less horsepower would be required. This will use less energy, put less wear on your equipment and in the end you will have a more efficient system and save water.

“With any sprinkler system, the water is moving like a piston and that characteristic actually pushes the water and nutrition away from the plant,” Naka points out. “Conversely, if you use drip irrigation, you are watering directly at the root zones of the plant.”

There have been major improvements to several of the key components of a drip irrigation system that make them more reliable, more efficient and reduced maintenance. After the pump is the filtration system.

“Dirt is the enemy in a drip irrigation system,” says Naka says.

Pre-filtering with a sand filter does require an investment, but a good unit can last for 20 years.

“The challenge is that you must filter the water down to the size of the smallest orifice on your emitters.”

“A lot of the early filter systems were not self flushing and you had to clean those screens,” Naka says. “Organic matter caught in there might be sticky and they were a nuisance to clean. I know it turned a lot of people off.”

Naka advises to look for a disc type filter, which is much easier to clean.

“You simply separate the screens and rinse them off,” he says.

The key for a manual filter system is that the more surface area you have, the fewer times you have to clean.

“If you have a two-inch pipe coming into your system, you might want a larger filter system say three-inch or even a manifold with two three-inch filters,” Naka says. “Again, it is an investment, but you will spend less time cleaning.”

Beyond that, Naka says to look for automatic flushing filters that separate the discs and back flush on their own.

Air is one of the primary issues that affect drip irrigation systems, Naka points out. He says air release valves are very important.

“The water lines will take time to fill through to the small tubing as this is a low pressure system,” he says. “In order to get the water through faster, it is a very good idea to have air release valves.”

He recommends you install them every 100 feet on main lines as well as header lines.

A pile of used drip tape in the corner of a field is often a legacy of lower cost drip systems. If it’s only a temporary install for a year, then an inexpensive turbulent flow tape might do, but they are known to clog.

If you are using punch style emitters keep it consistent, says Naka,  “Whatever you start with, keep it the same, even when it gets plugged. Don’t begin with a set of one-gallon an hour emitters and then grab a two-gallon when the supply store runs out. Don’t add in a line drip or a jet. Make sure it’s the same flows along that line.”

Naka says it’s also a good idea to put a meter on your system so you can monitor your water use regardless of your source. You will know how much water you are using for your own records.

“Any time you have a break in a main line, you have a risk of dirt coming into that line.”

He likes to install a backup screen at each lateral.

But what if you want to rotate your crops? An approach Naka has seen in Mexico was a filtration system on wheels. A suction line went into a pump and the pump went into a pond. It was easy for the operator to move the filter system to a different area. A lay-flat hose was used as a main line and laterals were connected by puncturing into the hose. After harvesting, the hose can be rolled up to move.

Sub surface drip is a newer technology to consider.

“A lot of people might say I had trouble with drip, why would I consider sub surface drip?” Naka asks. “We are seeing it more and more. It delivers both water and nutrients directly to the roots without even the small evaporation loss from regular drip.”

Sub surface drip lowers the risk of surface humidity, which may contribute to fungus. You are able to work the field while irrigating and the surface stays dry for crops that rest on the soil like melons. Test ports and monitors are available to check what’s going on under the ground and emitters are designed to avoid root intrusion.

The newest technology involves monitoring water needs, says Naka. Soil sensors and use of weather data continue to be developed, but sensors that attach and monitor the individual plant and fruit needs are coming into more use.

“It will allow us to develop our systems that more precisely,” he says.

“Good irrigation technology requires an investment up front. But the new systems will last more than 20 years, and you are saving resources.”