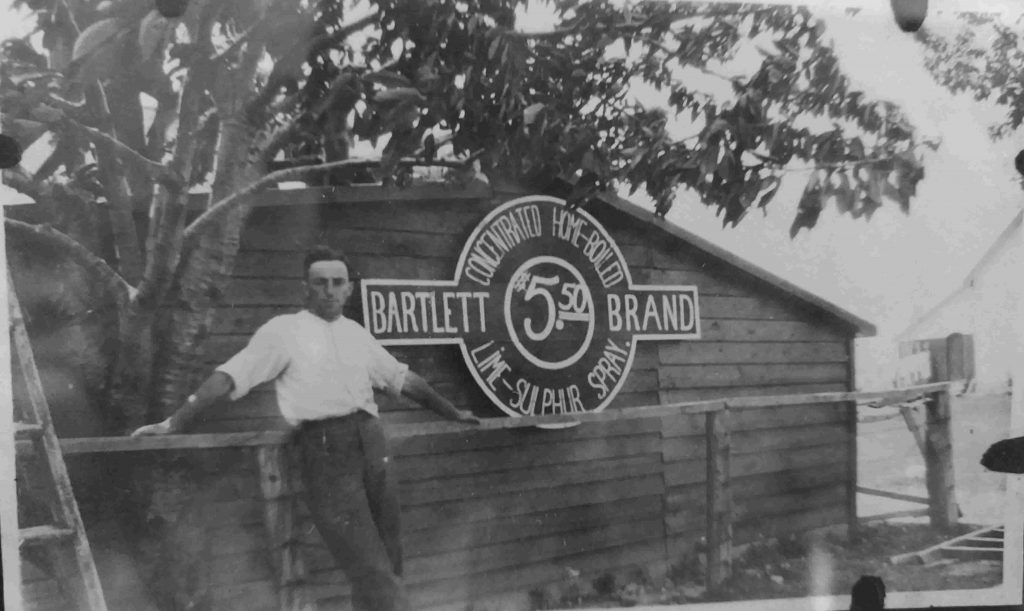 While most young men in the early 1900s were likely dreaming about driving a Model-T Ford, Norman M. Bartlett was thinking in an inventive way.

Living in Beamsville, Ontario – the heart of the Niagara Peninsula – had a strong influence on the direction of his thinking. The Niagara Peninsula has possibly the most unique combination of fertile soil types, climatic conditions and access to local markets in Canada.

It is also interesting to note that even at the turn of the century, the consumer was recognizing quality and placing demands on the growers to improve produce quality. This interest in quality plus quite possibly the fact that the major variety of pears grown in this area was (and still is) the Bartlett pear, (an interesting coincidence), were most probably the factors that strongly influenced Norman M. Bartlett’s life in 1912. During that year, he began manufacturing lime sulphur in a 40-inch cast iron kettle and thereby established Bartlett Spray Works. His product was excellent by 1912 standards, and Bartlett gained notoriety with this product as it helped to produce the quality crops the consumer desired. It was not long before other products were added to his list of crop protection materials and demand was spreading into the other fruit and vegetable growing areas of Ontario. Quality and service were synonymous from the very beginning.

Bartlett was a fruit grower as well during this time. The Bartlett farm on Bartlett Side Road in Beamsville consisted of a mixture of apples, grapes and pears – mostly Bartlett pears, of course. A grass-rooted involvement and extreme interest in trying to solve problems and find answers that were sound and profitable to not only Bartlett Spray Works, but to the growers he was serving then evolved. This would become the cornerstone of the foundation that N.M. Bartlett Inc. would still be building on some three generations and more than 80 years later.

Over the next quarter-century, Bartlett Spray Works continued to grow in both product range and geographical coverage. Products such as Paris Green, Bluestone (Copper Sulphate), Microfine Wettable Sulphur, Calcium Arsenate, Nicotine Sulphate, and Arsenate of Lead, to name but a few, were found under the Bartlett label. By this time, Bartlett had designed and built his own hammer mill and cyclone separator to be able to produce the finest ground sulphur in North America.

Bartlett Microfine Sulphur was known to growers as the best available. Soon word spread to other industries and Bartlett Microfine Sulphur was used extensively in the manufacture of rubber and explosives in Eastern Canada by companies such as Firestone, Uniroyal, CIL, and Dupont. When the use of dusts became the newest application method during the 1950s, Bartlett Spray Works met the challenge to produce quality products. The grind mill became instrumental in producing high quality superfine dusts.

The involvement of other Bartlett family members was also critical to the success of the company, which was incorporated in 1951 and renamed N.M. Bartlett Manufacturing Company. The three Bartlett children – Evelynne, Jim and George – all were involved in the family business. The children first helped out on the farm and, when old enough, became active in the spray works. George and his future brother-in-law, Hec Little, directed a staff of six involved in production, Evelynne managed the office and billing, and Jim looked after deliveries of the product, which included deliveries to the province of Quebec by the 1940s.

From the beginning, Norman had an inventive mind and enjoyed challenges. Therefore, it was not surprising that he designed and built fruit grading and sorting equipment as early as 1930. The Bartlett equipment set a world standard for excellence of handling fruit and vegetables. In fact, during the 1950s and 1960s, Bartlett equipment was built for growers in the United Kingdom, South Africa, Australia, New Zealand, Italy, Israel, France, and United States as well as Canada.

In Canada, this equipment introduced the Bartlett name into other areas of the country. Bartlett equipment and the Bartlett reputation became know to all fruit and vegetable growers from coast to coast. All of these additions to the Bartlett line complemented the crop protection products, which remained the mainstay of the overall business.

Jim Bartlett took over the leadership of the company in the late 1950s when his father, Norman, suffered a stroke. After a full and eventful life with many credits to his name, Norman passed away in 1970 at the age of 77.

During the late 1960s and 1970s, the next generation of the Bartlett family became involved. The company name changed to N.M. Bartlett Inc. during the late 1970s and growth through service and commitment remained strong. The leadership provided by Jim to the company blossomed out into the industry.

Jim spent considerable time and effort working for effective policy. He advocated tirelessly on behalf of the industry to the federal government on issues of cross border importation. He championed the first minor use registration of pesticides program in Canada in 1977 to help keep Canadian horticultural growers competitive. And he was an early promoter of the need for federal help to bring new crop protection products to the small acre crops that make up the diverse horticulture industry in Canada.

Jim served as chair of the national organization now known as CropLife Canada and was involved in the creation of the CropLife Ontario Council – working to balance the interests of the industry with the interests of society.

He was an active member of a group that brought the first Ontario horticultural conference in Toronto. Today, that annual event is known as the Ontario Fruit and Vegetable Convention and Jim’s grandson, Matt Peters, has served as its president. He’s one of eight grandchildren that represent the fourth generation in the Bartlett family business.

Jim continued to be actively involved in all the aspects of the business until 1981, when he had a severe heart attack. At that time, his brother-in-law, Hec Little, son-in-law Don Peters, and son, Craig Bartlett, became the management nucleus with Jim serving as a semi-retired advisor. This management team oversaw a broadening sales force of 13 across Canada and continued successfully through the 1980s. When Jim retired in 1987, he was elected as Chairman of the Board, and his son, Craig Bartlett, became president of the company.

Jim passed away in 2011, one year shy of the business celebrating 100 years. He was conducted into the Canadian Agricultural Hall of Fame in November 2016, recognized as a visionary, passionate advocate and respected voice in Canadian agriculture. He left behind a lasting legacy in a family business that continues to have a positive impact on Canadian horticulture.

The values set out by Norman and Jim have been carried forward in the third and fourth generation’s business goals and commitments. Service and dedication to the horticultural industry in Canada is still first and foremost.

In the words of Craig Bartlett: “We at N.M. Bartlett Inc. are proud of the heritage and values that the first two generations established, and the company looks forward to a future where we will continue to apply these time-tested values.”

Norman Bartlett himself would have been proud of the accomplishments to date of the little, privately-owned family business he started 105 years ago.