Equipment Storage
The ins and outs of potato storage 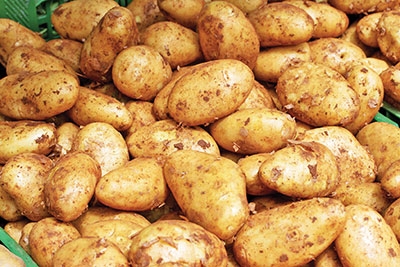 In potatoes, the factors that affect storage performance include environment, your agronomy, varietal traits, disease, and harvest and management practices.

“Neither will meet their potential without both working successfully together,” he says.

The first step is to evaluate your existing facility to decide if it needs just an upgrade or something different entirely. When evaluating an existing structure, you need to look at its location, the structure itself, its insulation system, its ventilation systems and the controls.

From a location perspective, your operation should be situated near the production point to minimize transport costs, preferably on a road that has 12-month access. Also, it should be located where there is sufficient electrical power supply, specifically three-phase power.

“This is a very important factor,” says Forbush. “Three-phase power is an important piece of the puzzle.”

In terms of size, you need enough rooms to hold each variety. Not only that, but those rooms should also consider the climate that you’re harvesting from. “We want one variety in there, we want to fill that bin in three days’ time, and we want to be able to sell that crop in less than three weeks,” says Forbush.

“If it takes you too long to fill that bin of potatoes, you’re going to have a lot of diversity as far as the harvest conditions that you went through and those are going to come back and cause losses in storage. And losses in storage are losses right across the bottom line.”

When it comes to potato storage, insulation requirements say that you should have an R-value of 45-60 in the ceiling, an R-value of 35 to 40 for the sidewalls, and high to low-density materials from the inside out.

“You don’t want to trap moisture in those walls,” says Forbush. “So what happens is we’ve got a moist, warm environment inside the building. If you let that moisture get into the insulation system it’s going to condense at some point after. If it condenses near structural material, it can compromise it. It’s important that once that moisture moves into the wall it can move out.”

Ventilation 101
“Why is it that we have a ventilation system in potato storage?” Forbush asks.

Because you want to create a uniform environment, while at the same time maintaining proper potato temperature. You also want to provide oxygen for respiration and remove carbon dioxide from respiration.

A poorly designed ventilation system can cause air to be pulled from and directed to the wrong places in your bin. The result is non-uniform ventilation. There are industry-accepted standards for designing and evaluating ventilation system performance in potato storage. Air takes the path of least resistance, Forbush reminds growers. If you’re not sure whether or not your air is going where you want it to go, measure it. Remember, your ventilation system’s airflow is a function of its design. By quantifying the flow of air through your bin you’ll know just where your system needs improvement.

According to Forbush, a well-designed ventilation system includes these attributes:

To calculate where the air is going in your storage space, collect the following information to determine airflow: fan size, horsepower and manufacturer; bin capacity (L x W x potato pile height); plenum area (the chamber prior to the potatoes); fresh air, return air, exhaust air and humicell area; duct area (pipe or flume size and quantity); and slot area (type of slot guarded or not).

For example, here are the calculations for a well-balanced bin:

“The most important thing is to make sure that your air system in your potato storage has got even airflow throughout the entire storage,” says Forbush. “The most common mistake would be in the sizing of air ducts and slots – the entry point for the air system into the potato pile. The most commonly missed number is the number that determines that the air’s moving at the correct speed going into the pile.”

Here’s how to determine slot area. If it’s pipe, measure the size, number of rows and distance of holes drilled in the pipe. If they’re flumes, measure the board width and amount of open space between each board. For example, our example: 78,000 / 65 ft^2 = 1200 fpm.

Creating the perfect potato
The second part of the quality potato storage equation is the potato itself. In potatoes, the factors that affect storage performance include environment, your agronomy, varietal traits, disease and harvest and management practices.

The most important factor in determining storage performance is variety.

“Varietal traits give us a starting point for understanding the strengths and weaknesses of the crop going into storage,” says Forbush. When choosing a variety, look for such traits as yield, specific gravity, sugar profile in storage, bruise resistance and disease resistance.

“Those four things come together to kind of create the fingerprint or the way the genetics are expressed for that
potato,” says Forbush. “Given those four things, you’re then going to determine how those impacted each other, and you do that with what’s called pre-harvest sampling.”

Pre-harvest data is a valuable piece of the “complete picture” of your tubers’ maturity and storability.

“What you’re trying to do is figure out how those four main pieces came together in any given season and then determine what the best storage practices are given the way those four variables impacted the crop’s genetic expression.”

Finally, in order to implement these ideas on your operation it’s important that you have great communicate with your staff.

“If your staff members do not understand operations goals, they cannot help achieve those goals,” says Forbush. “Identify areas where improvements in your storage facility and storage management practices can help achieve
operational goals.”