Pascale Coutu is a woman with a mission, one that is broader than it may initially seem.

“I want to share my passion for agriculture,” says the 39-year-old owner and operator of La Courgerie. “But also the fruits of it – my tastes, recipes and products.”

Coutu set out with her partner Pierre Tremblay in 1999 to relaunch her family’s farm – previously a dairy cow operation – on eight hectares near the tiny village of Ste. Elizabeth, some 50 miles east of Montreal, that have been home to her family for more than 250 years. 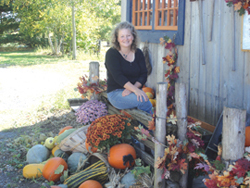 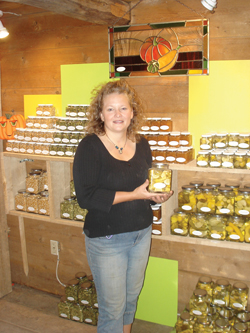 Pascale Coutu holds a sample of some of the preserves available in her on-farm store. La Courgerie products are sold in various regional locations and growing sales throughout Quebec, and as far west as Ottawa, has her considering wider distribution. Photo by Joel Ceausu. 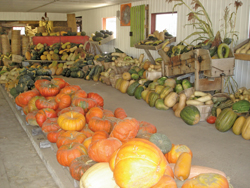 Coutu set out to demystify squash, teaching folks to appreciate its uses and forms. The consumer education has paid off in direct dollar value. Larger varieties that once sold at one price for décor, are now selling successfully by the pound, because people are discovering their usefulness. Photo by Joel Ceausu.

With tourism and human resources backgrounds, the transition was not a natural one for the pair, or their farm. “We took up the challenge and began researching what would grow here,” she said. “The soil is very heavy in clay so not just anything works. Squash seemed a good choice.”

That was buttressed by her belief that interest in using food as decoration would grow, thanks to the soaring popularity of making crafts and media icons like Martha Stewart. “Americans were very excited about this,” she says, referring to the U.S. preoccupation with seasonal decorating using foods and other natural products.

Coutu started with a few dozen pumpkin and squash varieties, meeting hot U.S. demand for Halloween décor made more attractive by a weak Canadian dollar. “Then came September 11,” she recalls. “The border closed and 40,000 pumpkins sat in my lot.”

She responded by advertising and thousands showed up, buying all her inventory. “We were on to something, but had to reorganize, conduct tours and get people to stay longer and spend more money.”

La Courgerie welcomes more than 25,000 visitors from September to October – using unique animated circuits explaining varieties, recipes, decoration tips, farm history and more, with interpretation panels throughout the farm. A retail boutique offers homemade pancake mixes, preserves, relishes, jewellery fashioned from gourds and corn, decorative items, and Coutu’s own recipe books and pamphlets. She sold many transformed products online at first, but stopped when soaring demand put too much pressure on her and her meagre inventory. “Besides,” she says, “Quebec laws prohibit direct farm sales of some products. It’s still grey zone and I had enough on my plate.”

Transformation also meant paring down guided visits. Last year she welcomed 400 school groups. “It was too much,” she said. “It felt like we were falling victim to our own success.”

What’s more, traffic and often-unsupervised children made operations hectic. In 2007, she accepted only 30 school tours. “We want kids to come, but with their parents who buy. Our swings and tractor rides are still here, our pumpkins are all you-pick, but it is no longer our primary focus.” Coutu has also tried keeping a “human scale.” That means not seeking out many new customers but instead selling more to the customers she already has. “That means target, target, target.”

She recruited public-relations specialist Martine Meilleur to reach the appropriate clientele through cooking shows, lifestyle magazines, food columnists and restaurant industry publications. It has worked, with La Courgerie products and recipes featured in a host of Quebec publications and media. Coutu herself is a popular speaker at industry seminars, sharing experiences and motivating others, and her farm features prominently on regional tourist maps and official highway signs – expensive but worth-while endeavours, she says. “The moment they went up, our clientele from surrounding municipalities and villages increased dramatically.”

“It’s a unique operation here,” says Meilleur. “Focusing on squash with almost 400 varieties, and seasonal, it has loads of appeal. We use it all to attract cooks who are adventurous, looking for healthy foods to feed families and customers.”

Today Coutu’s farm offers hundreds of varieties of pumpkins, squash, marrows and gourds, from zucchini and patty pans to moschatas and calabasas. Still popular of course, are acorn, butternut, and pepper squash (unfortunately named in French, because it suggests green-pepper-like taste) and her favourite, giant banana squashes. “Generous in flesh, generous in flavour!” says Coutu.

Melons are also very popular – she has more than 30 varieties – but admits “it has been a battle with melons owing to the dense soil on the farm.” (Coutu plans to replace a portion of her soil with one less likely to squeeze roots, making melon growing easier.)

La Courgerie produces more than 400 different varieties of pumpkins, squash, marrows and gourds, from zucchini and patty pans to moschatas and calabasas. Photo by Joel Ceausu.

To succeed, Coutu set out to demystify squash, teaching folks to appreciate its uses and forms. “There’s more to us than spaghetti squash” is her mantra. Indeed, she says most people are shocked to learn that cooking squash is as easy as cooking potatoes. She offers popular on-site cooking classes, allowing visitors to learn techniques and recipes, and become familiar with the multitude of varieties. Consumer education has also paid off in direct dollar value. Larger varieties that she once sold at one price for décor, are now selling successfully by the pound, because people are discovering their usefulness.

Clients regularly fill bushels and return often throughout the season. “Once they try it, they buy it,” she says. “So we teach them to choose by format, size, taste and texture. We heavily encourage their use as decorations, beyond Halloween, and come late November they will be marvelous to eat.”

Besides farm sales, La Courgerie products are sold in various regional locations, including Joliette’s popular Christmas market. Growing sales throughout Quebec, and as far west as Ottawa, has her considering wider distribution.

With eight full-time employees – plus her parents, who help in boutique sales and field tours – Coutu relies on local agricultural students. “Their availability is perfect for our seasonal operations, and many are very multi-skilled, exactly what we need since they will be working with customer service as well as technical aspects of the farm, including what is a difficult harvest. We have limited, small machinery and need smart workers; people in shape who know what they are doing.”

Most of her employees are women, something she appreciates. “Opportunities for women in agriculture are not always obvious,” she says. “It’s nice to have women in charge.”

La Courgerie has fast become a veritable institution in this idyllic corner of Quebec’s Lanaudière region.

“At first 90 per cent of our output was sold for décor and now 90 per cent is sold for consumption, with people still choosing with decoration in mind,” says Coutu. “This is exactly what we wanted, so I guess we’ve done our job.”

She’s not the only one to think so: back-to-back wins of Quebec’s Regional Tourism Grand Prize, and people the province over cooking up squash like never before show those efforts have paid off.

Related
B.C. gets boost for new tree fruits
Sliding scale market brings fruits and vegetables to all
Government of Canada invests in tender fruits and fresh grape research
Fruit of their labour featured at Cherry Fair