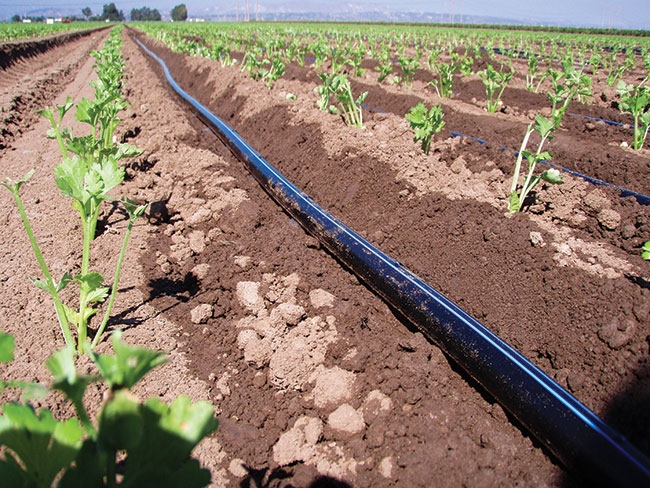 Treat the soil profile as a bank holding your water, so you are making deposits with irrigation and making withdrawals through crop water use. Contributed photo

Drip irrigation is no longer the ‘new kid on the block,’ and nearly 10 per cent of U.S. farms rely on it to grow their crops. Each year, new growers dabble with drip and many learn by trial and error. Reaching out with some helpful tips to those growers is Inge Bisconer, technical marketing and sales manager for Toro Micro-Irrigation.

Drip irrigation is a system where water is pumped from the ground or surface, filtered, amended with nutrients and/or water treatment chemicals, and then delivered directly to the crop root zone through a network of pipelines into different types of emission devices depending on the crop to be watered. Micro-irrigation has typically been used for fruit, nut and vegetables. However, for the past 25 years, it has also been used successfully with field crops such as alfalfa, corn and soybeans too, Bisconer explained.

“It is successful because we can target water and nutrients directly into the root zone,” she said. “It is a very popular technology that is growing every day,” she said.

Benefits include better yields, quality and crop uniformity, all done using less water, fertilizer and energy versus sprinklers and sometimes even less than flood systems depending on how much water is pumped. With reduced inputs, growers are better able to comply with environmental concerns such as deep percolation and runoff. Less labour also means greater profitability.

“That’s almost half the runtime required; that’s half the pump time, the water and nutrients, labour and so forth,” she said. “That’s why uniformity is important in terms of resource consumption.”

The choice of emission device is even more important because tape and dripline emitter performance varies widely, Bisconer said.

“Choosing a flow control emitter will usually improve system uniformity by about five points or even more, depending on layout and terrain, versus a turbulent flow emitter. Flow control emitters also avoid the expense and other drawbacks of pressure compensating emitters. It’s very important to have help from the local dealers and designers, and manufacturing support to select the right components and layout to optimize system uniformity.”

Bisconer said the Micro-Irrigation Owner’s Manual, which she authored, is a good reference guide for operating a uniform irrigation system and it is a free PDF download from the Toro website.

“The second edition was published six years ago and is written in layman’s terms for growers and includes irrigation scheduling, maintenance and operation,” she said.

She recommended focusing on the seven key items in the manual.

The first is to monitor and record the system flow and pressure.

“That’s absolutely the first thing an operator should look after,” she said. “If it’s not already included in the design of the system, it’s never too late to get a flow meter and put in pressure gauges because otherwise you have no idea how to tell if the system is operating properly. You can’t tell by looking at it, especially if it’s a sub-surface system.”

There are several places where a system should be monitored, such as upstream and downstream of the filters. If the pressure difference between those two is large, that generally means the filter is plugged. Pressure gauges should be included at the start and end of each irrigation block. A flow meter at the pump station will also help indicate if there is clogging or a break in the line.

“That’s the number one, to measure those parameters,” she said. “The second thing is to record it, keep a record of it and compare it with what it’s supposed to be. Once you’ve installed a drip irrigation system, you should get some information from the dealer as to what the flow rate and pressures should be at the filter station and at the block valves. Growers should routinely take those readings and compare them with the baseline data.”

The third thing is to maintain the system like you would a swimming pool where you use chlorine and acid treatments to keep the water in good shape.

“If you are a drip system operator, please find out what your water pH is because if your pH is high and you start to get clogging, and you’re adding chlorine, you’re wasting your money because the efficacy of chlorine at a pH of eight is about 20 per cent versus 80 per cent at a pH of six,” she said. “We also need to know how much acid to add to your water to lower the pH, and that can be found out by taking your water sample to the lab and they’ll do a titration curve and tell you how much acid you need to apply to bring the pH down from eight to six. Not hard to do, it’s just a chore that needs to be done.”

The fourth thing she likes to stress to growers is the importance of applying all fertilizers properly.

“Please apply fertilizers through the drip system. It’s the perfect delivery vehicle. If you’re irrigating but you’re not fertigating, you’re missing out on one of the main benefits of a drip irrigation system.”

Bisconer said fertilizer trades people should be able to supply tables on their product showing the compatibility of different fertilizers mixed together and which ones will cause clogging and which ones are compatible.  The owner’s manual also provides such a table.

“A very simple thing to do, if you’re going to be adding fertilizers together, is to mix them together with the water from your drip system into a jar, shake it up and let it sit overnight,” she said.

Treat the soil profile as a bank holding your water, so you are making deposits with irrigation and making withdrawals through crop water use.

If the chemicals precipitate out of solution and clump up, clogging could occur in the drip emitters. The solution is to change the pH, or choose a different fertilizer to avoid emission device clogging.

“Also, irrigation runtime in relation to fertigation is important,” she added. “For example, don’t add fertilizers prior to a long irrigation set which will result in the fertilizer leaching beyond the root zone. Stabilize the system first, then towards the end of the cycle inject the fertilizer into the soil where it’s useful, then clean out the system for a few minutes afterward to get the fertilizer out of the lines.”

The fifth area of concern is the importance of flushing out the laterals.

“Even if you are irrigating perfectly filtered water, there are some things that make it downstream of a 200 mesh filter and even if it doesn’t cause harm to the physical system there are biologicals and chemistries that can happen,” Bisconer said. “Some of the tiny particles that are harmless on their own aggregate and start to cause clogging problems so we need to flush them out periodically.”

From a hydraulic stand point, the standard in the U.S. is to flush lateral lines at one foot per second; duration is until the water runs clear. Do this as often as needed. Many systems have an automated flush, which reduces the manual aspect. Or surface laterals can be fitted with a valve and manually flushed periodically.

“Take care to not open all the lines at once because then you won’t get the flushing velocity,” she said.

Conditions are different on every system so start by flushing every week and let the laterals flush for about 10 minutes so the debris in the middle of the tape or drip lines has time to be expunged. If everything looks clean, then flush once a month, if good, then two months. At the bare minimum flush at least once per year, she advised.

The sixth concern is measuring field uniformity. This can be done via a field-can test where flow is measured from a representative sample of emission devices. The cans are placed under drip emitters throughout the field to measure water amounts. She advocates measuring uniformity periodically because even the best systems change over time and can decline far below optimum if not monitored.

For the seventh concern, Bisconer advised growers to schedule irrigations according to weather conditions and agronomic needs of the crop, for example, using the cheque book method as a baseline. With proper irrigation scheduling, the crop may be spoon-fed and waste minimized.

“Don’t run a drip system the same as a gravity system, which undergoes feast and famine conditions,” she said. “Most of us like to eat two or three times a day and crops are the same way.”

Consider that the soil profile is a bank holding your water, so you are making deposits with irrigation and making withdrawals through crop water use, she suggested.

“We don’t like to be overdrawn with our bank accounts, and the crop doesn’t like that outcome either.”

So how often should growers irrigate?

“We want to balance our applications with our withdrawals,” she said.

Soil types and irrigation equipment help dictate the wetting pattern, which is especially important for vegetable growers, she said. The wetting pattern they desire influences their choice of emitter flow rate and spacing. Popular at the moment is the low flow tape with emitters spaced at eight-inches apart.

Bisconer’s final word of advice is to not go it alone.

“There are tons of resources out there including the local dealer that you bought the equipment from, the manufacturer who supplied it, the universities, consultants, and the commodity organizations,” she said. “All are teamed by people eager to help. Please take advantage of these resources.”