An overview of the Canadian Grapevine Certification Network, the presence of grapevine viruses in Canada, and the network’s efforts to establish virus-free nursery stock. 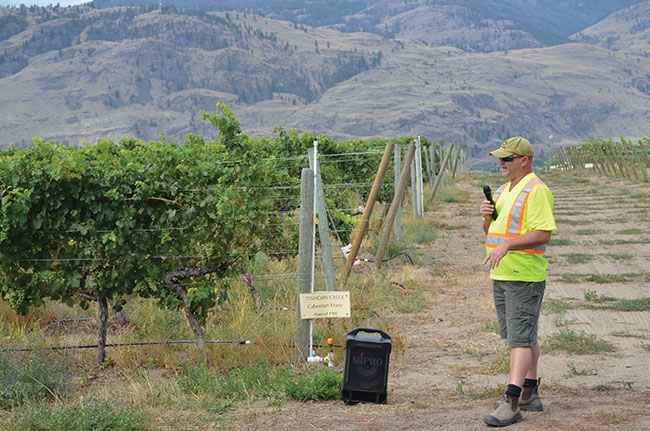 As the Canadian wine grape industry develops and matures, the incidence of grapevine leaf viruses is expanding to the point where they are impacting grape production, and as a result, are affecting the finances of the wine industry as a whole.

“Worldwide, grapes are known to be infected by nearly 60 different viruses,” notes Hans Buchler, a B.C. grape grower and research co-ordinator for the B.C. Wine Grape Council. “That is more than any other perennial woody crop. The incidence of viruses is becoming a matter of urgency.”

“We started with an inter-provincial committee looking at this about 10 years ago and the Canadian Grapevine Certification Network (CGCN) was incorporated in 2017 as a national not-for-profit organization with the aim to reduce virus impact to the industry,” says Buchler, who is the CGCN chair.

“We have a fairly good handle on how serious the problem is and how fast it is spreading in vineyards where vectors are present,” Buchler says. “We estimate that GLRaV3 is expanding at about 10 per cent a year across the south Okanagan.”

“We have a fairly good handle on how serious the problem is and how fast it is spreading in vineyards where vectors are present,” Buchler says. “We estimate that GLRaV3 is expanding at about 10 per cent a year across the south Okanagan.”

Ontario is currently compiling data. Sudarsana Poojari, senior scientist in grape virology at Brock University, is working in collaboration with Wendy McFadden Smith, tender fruit and grape IPM specialist with Ontario Ministry of Agriculture, Food and Rural Affairs, on a large-scale survey to understand the virus incidence in grapevines in Ontario. The project will continue for another two years.

“Unfortunately, the numbers in Ontario are higher than they are in B.C.,” Buchler maintains. “And red blotch is much more of a problem in Ontario.”

“I get regular calls from growers enquiring about our services,” Poojari says, adding that the lab tested 30,000 samples last year and is on track to double that number this year.

There is no cure or solution for grapevine leaf viruses. Their presence manifests gradually, meaning that as Canadian vineyards age they are showing the increasing effects of GLRaV3 and red blotch.

There is no cure or solution for grapevine leaf viruses. Their presence manifests gradually, meaning that as Canadian vineyards age they are showing the increasing effects of GLRaV3 and red blotch.

Initially, the viruses come into the vineyard on infected plant stock. Andrew Moon, viticulturist for Tinhorn Creek just outside Oliver, B.C., in the south Okanagan relates a common story for Canadian wineries.

“Tinhorn Creek planted a 100-acre parcel on the Black Sage Bench in 1995 with Cabernet Franc and Merlot vines imported from France,” Moon told an Okanagan grape growers field day in August.  “Unfortunately this stock came into Canada infected with GLRaV3 and now after more than 20 years it is starting to affect production.” 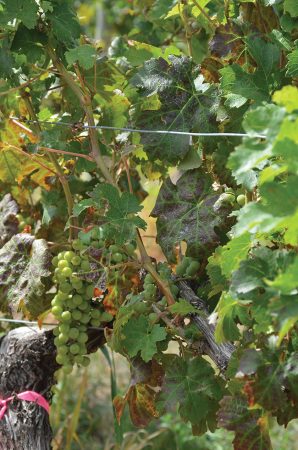 Buchler says that is the most common occurrence. “People will say that the viruses came in through “suitcase importation”,” he notes. “But the majority has been from commercial nursery stock.”

Moon says they are currently managing the virus by reducing crop load on the vigorous Cab Franc vines down to around two tons per acre, much less than the four to five tons production capable from healthy vines.

“We are really reducing stress any way that we can for these vines, some of them have almost no fruit,” he adds.

However, It’s a losing battle Moon says. Eventually the yields will be uneconomical, even for this popular varietal and the entire vineyard will have to be removed.

“We replace about 10 per cent of our vines each year,” he says. “Some of that is rouging out virus infected stock, but these entire blocks will need to be pulled out and replanted eventually.”

That is not the only tale at Tinhorn. Moon describes the second way of spreading the virus, by propagation from infected vines.

“We had a major winter kill in 2015 and we lost 17 acres of Merlot vines,” he explains. “The company didn’t have a lot of resources for replant, we had just come through a low production year and we decided to take our own cuttings rather than purchase from a nursery.”

Unfortunately, the parent vines were infected with GLRaV3 and just four years later, the replanted block is showing signs of infection.

“This is what happens when you don’t use clean plant material,” Moon says.

Enter the Canadian Grapevine Certification Network (CGCN). With representatives from the provincial grape grower associations in B.C., Ontario, Quebec and Nova Scotia, the network’s goal is to provide Canadian viticulturists with a sustainable, domestic, supply of clean-certified grapevine material.

There are currently three nurseries in Canada that are part of the CGCN interim program Buchler explains and he hopes that number will grow.

“They test for four viruses; leafroll1, leafroll3, red blotch, and pinot gris virus,” he says. “Every plant they are using for propagating has been tested and they will be able to make the claim ‘verified by CGCN to be free from…’”

“They test for four viruses; leafroll1, leafroll3, red blotch, and pinot gris virus,” he says. “Every plant they are using for propagating has been tested and they will be able to make the claim ‘verified by CGCN to be free from…’”

There is also a long-term program to provide nurseries with clean material from the Canadian Center for Plant Health in Saanich, B.C.

“Nurseries would plant propagation blocks that would be monitored on an on-going basis,” Buchler explains. “They would then use those vines to produce nursery plants for sale.”

Research is also a priority of the CGCN and occurs through the Canadian Grape and Wine Science Cluster, which co-ordinates the work of scientists in the four regions. The science cluster’s work ranges from virus and pathogen issues, to cold hardiness and improving wine quality.

Research is currently underway on how to manage insect vectors that spread the viruses. Mealy bugs and soft scale insects are known to transfer the virus between plants and scientists are perfecting methods to control both.

All grape virus testing in Canada is handled by the testing lab at Brock Universities’ Cool Climate Oenology and Viticulture Institute (CCOVI). Canadian Grapevine Certification Network chair Hans Buchler, says that it makes sense to have one central testing facility.

“Their equipment is state of the art,” Buchler says. “And we have a standardized protocol for consistent results.”

Sudarsana Poojari, senior scientist in grape virology at Brock University, administers the lab. He says they have lots of capacity and regularly test 200 to 300 samples a day for six viruses.

CCOVI also provides growers with a guide for a proper sampling process, including a video with Poojari demonstrating sample collection.