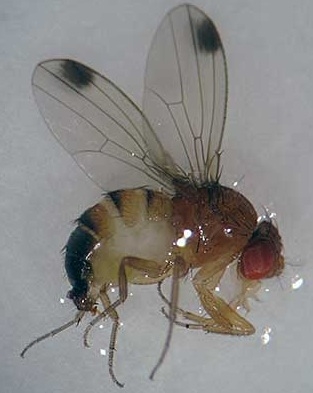 The spotted wing drosophila (SWD) is an invasive vinegar fly from Asia that was first identified in California in 2008. Since then, it has rapidly spread throughout most fruit producing regions of North America and several European countries.

Surveys coordinated by the Ontario Ministry of Agriculture, Food and Rural Affairs (OMAFRA) in 2011 and 2012 detected this pest across southern Ontario. Environmental conditions including a mild winter have favoured the survival and seasonal population build-up of SWD in 2012.

Unlike most vinegar (small fruit) flies that lay their eggs in damaged or decaying fruit, SWD females attack healthy immature fruit that is beginning to ripen. As a result, affected fruit contain eggs or larvae at harvest. Injury to fruit caused from oviposition of eggs under the skin of fruit also allows the entry of plant pathogens that can promote rapid breakdown.

SWD is a manageable pest. Important practices include harvesting early, clean and often, as well as cull pile management. Wild raspberry, blackberry, blueberry, mulberry, honeysuckle, dogwood and other non-crop hosts near field borders act as reservoirs of SWD, and their management may be warranted to limit migration into crops.

There are several insecticides registered as Emergency Uses for 2012; make sure to rotate between chemical classes and watch for label restrictions and PHIs. OMAFRA has developed web-based resources where growers can obtain more information on SWD including a real-time map of pest activity.

For more information visit www.ontario.ca/spottedwing or the following links: