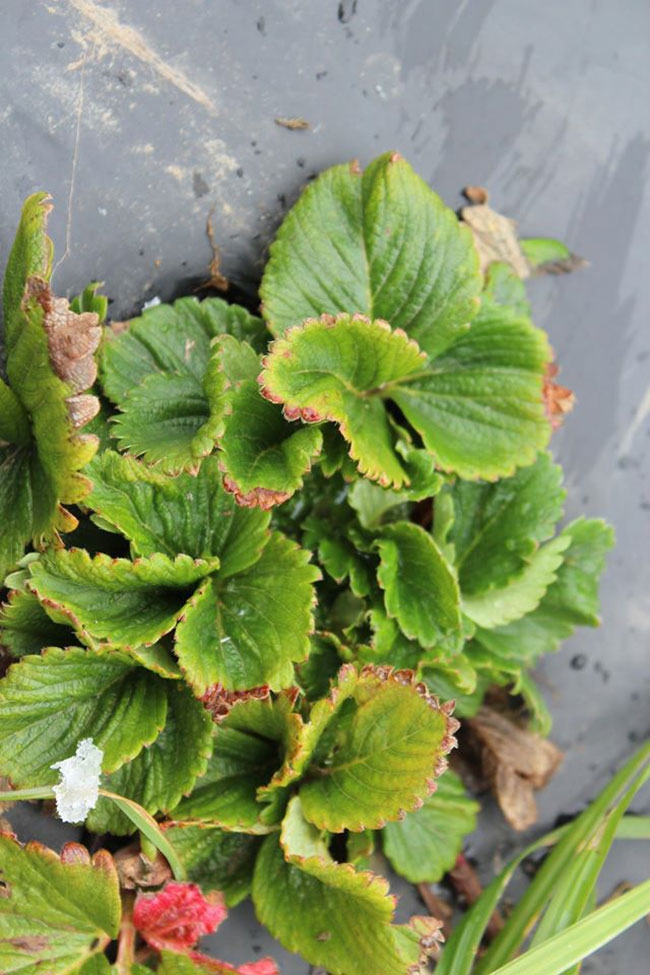 An example of strawberry mild yellow edge and strawberry mottle virus infecting a plant at the same time. courtesy of Nicole Ward Gauthier, University of Kentucky

John Lewis, a berry crops specialist with Perennia, recently reported recovery from Nova Scotia’s strawberry virus epidemic is now ahead of schedule and a normal crop is expected in 2015.

Speaking at the 2015 Scotia Hort Congress, Lewis was at pains to note the two viruses – strawberry mild yellow edge and strawberry mottle virus, which have plagued the province’s berry growers since 2013 – did not combine or mutate as reported in several media articles. Instead, when plants were infected by both viruses, there was an added synergistic effect, causing more problems in the plants than would have been caused by each virus on its own.

“We have always operated under the premise that the plants are unaffected by a single virus infection and it is only when there are two or more that the plant is compromised,” Lewis said.

Virus effects vary from strawberry cultivar to cultivar and the infection duration also seemed to play a role, “but these variables are only now being figured out,” Lewis said. “The effects of the mixed infection is sometimes referred to as a strawberry decline disease and I think that is a good general description.”

It has been suggested that the disease started in 2012 in nursery plants and moved to the fresh fruit crop in 2013, but Lewis disagreed. “There is no evidence of a sudden arrival of either virus,” he said. “It is probable that a slow increase from base levels in the environment, likely in wild strawberries, facilitated by sustained favourable weather, led to the outbreaks in 2012 and 2013.”

About 50 per cent of 2013’s fresh fruit crop was lost due to combined acreage reduction (crop destruction by growers) and virus impacts on yield and fruit quality. The resulting smaller berry crop in 2014 was mostly due to the reduced crop acreage associated with the aggressive crop destruction in 2013 and the spring of 2014.

Lewis believes the crop acreage should be back to normal this year and he expects a normal crop yield, “with respect to viruses, even though we are still measuring modest levels.”

Two virus-testing surveys were done in 2013, the first to determine the distribution of the two viruses around Nova Scotia and the second in late summer to ascertain the level of infection in newly planted fields. In some cases, it was recommended to remove some newly planted fields for virus controls, said Lewis.

A virus infection survey was also done in the fall and spring of 2014 of all newly planted commercial fields. According to Lewis, levels of the two viruses in the 2014 survey had dropped to 15 per cent for strawberry mild yellow edge and two per cent for the strawberry mottle virus.

“Considering that both viruses are required to cause decline disease, we know from these numbers that we can have no more than two per cent disease. For this reason, coupled with acreage recovery, I am predicting a normal crop in 2015, at least with respect to virus effects.”

Aphids are known to spread the viruses and Lewis stressed the industry still needed to be vigilant.

“If you have a bad aphid year, everything will go right back up and we will be back in the same boat.”

This means growers will need to carefully manage aphids throughout 2015, he said, adding aphid populations will be measured again in the fall.

“We can then, hopefully, take our foot off the gas next year.”

Lewis attributed the Nova Scotia strawberry industry’s quick recovery, in part, to its small size [relative to other provinces]. He added the active participation of growers, who destroyed more than 150 acres of strawberry plants to eradicate the infection, worked to solve the problem.

A federal-provincial strawberry assistance program also facilitated the removal and replanting of infected fields, Lewis said, and the availability of virus-tested stock from local nurseries ensured that newly planted fields would be disease free.

A strategy has now evolved involving aggressive removal of infected fields, followed by replanting with virus-tested stock, Lewis said. This program is being assisted by aphid monitoring, which was started in 2013.

Lewis believes the two viruses are in Nova Scotia to stay. Their combined level needs to be reduced below five per cent before crop production and field management can return to normal levels, he explained.