Researchers in North America and Europe share insights about SWD and new opportunities for control. 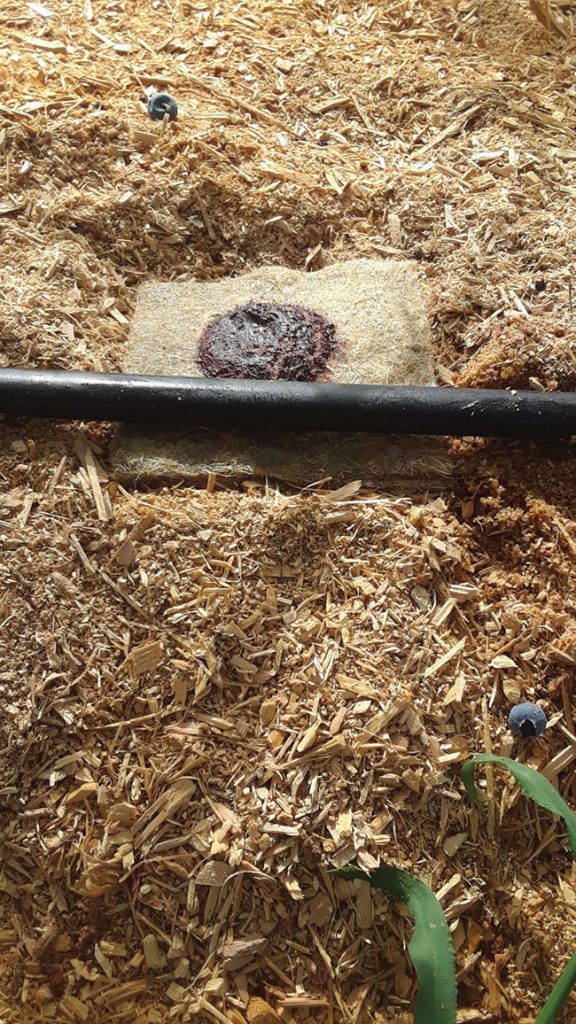 A test patch for the attractant that is performing better than raspberries to attract SWD. Photo courtesy of Ronda Payne.

Fruit growers need no introduction to Spotted wing drosophila or SWD for short. The pest spread from its native home in southeast Asia to Europe and North America and has been making its presence known ever since. It’s not your average fruit fly with its persistence and desire for ripening fruit, versus other fruit flies that will only infest rotting fruit.

Europe: a reactive approach for now

The pest issue began in Europe in 2008 when the pest came to southern France and Italy, and then made its way across Europe, according to Neal Ward, integrated pest management (IPM) and pollination specialist with Biobest NV of Belgium.

“It spread within a few years through all of Europe,” Ward says. “If there’s one thing to get from this, it’s that SWD is one of those pests where there’s no silver bullet. It’s a toolbox approach.”

SWD pressure in northern Europe is similar to Canadian berry-growing regions where the fruit fly is most prevalent from July to October. While prevention would be ideal, this isn’t the way European growers are dealing with SWD because they don’t have the tools they need yet. “What it boils down to is most growers use a reactive strategy,” Ward says.

Unfortunately, there are only three chemicals available for managing the pest in Europe and there have already been signs of pesticide resistance. Additionally, these chemicals are on emergency use and can be pulled at any time. On the flip side, Ward notes that this is an ideal opportunity for everyone in the industry to work together towards a solution. He says that academia, growers and agriculture companies are sharing knowledge to get ahead of SWD.

“There’s very little true open-field grown in northern Europe, even in southern Europe,” he says. “So we really need to be on top of our hygiene, so to speak. It’s pretty standard advice from an IPM person. Start clean. End clean.”

He adds that there is a need to keep the environment as dry as possible and put traps in shady, humid areas around field perimeters to identify when pressure is mounting. The preferred trap seems to be the worst one available because it’s cheap, easy to use and uses good bait. Some growers monitor their fields year-round. “As soon as they see them in those perimeter traps, they have to make a decision of what to do,” he says. “They generally move on to checking for larvae in fruit and then may use one of the three sprays at that point.”

The advice for European growers is the same as what Canadian growers hear regularly: pick early, pick often, pick clean and maintain good field hygiene. Composting SWD-infested fruit isn’t advised as the amount of compost required to reduce the attractant levels is massive.

Other options being explored include the Trichopria wasp, which Ward says has its strengths and weaknesses. A European company is working on identifying ways to make the wasp a viable option. Ward cautions that there’s more to the wasp’s introduction process to be explored before it’s released because it can’t simply be released directly into the crop.

The Ganaspis wasp is another parasitoid wasp being assessed. It’s native to African regions and, Ward explains, this possible solution falls under the method of using an exotic species where there is an exotic pest.

“Nematodes have some potential, but what happens in a Petri dish and in a field are completely different,” he says. “Lure and kill techniques are definitely of interest whether that’s a chemical or a biopesticide. We can repel the SWD from the crop and push it into a trap.”

“Nematodes have some potential, but what happens in a Petri dish and in a field are completely different,” he says. “Lure and kill techniques are definitely of interest whether that’s a chemical or a biopesticide. We can repel the SWD from the crop and push it into a trap.”

There is also the idea to deplete SWD through intercropping of non-host plants as well.

All these ideas could become possible solutions after field testing. “They are great ideas and they seem to work, but they need to be brought out into the field,” he notes. None of them will be ready for growers in the short term, but outcomes of these tests will be beneficial in the long-term battle against SWD. The downside is that regulatory approvals for these solutions are difficult to obtain.

Back in North America, researchers at Oregon State University (OSU) have been exploring attractants for application on fabric to be installed in fields. Vaughn Walton, an entomologist with OSU, assembled a team of researchers to study SWD and to test better control methods. In 2019, the team began its first year of trials in open fields of a new behavioural agent which will work for both organic and conventional fields.

Interestingly, the study started off with repellants until one test failed miserably and actually attracted SWD instead of repelling it. The failed repellant trial lead to the exploration of attractants and how this could benefit crops. One SWD study from 2013 by David E. Bellamy found SWD preferred raspberries over the seven other fruit varieties tested. The research was primarily conducted in California and looked at the preference of SWD to blackberry, blueberry, cherry, grape, peach, strawberry and raspberry. Walton notes that the OSU attractant was tested and found to be as desirable as (or more so than) raspberries. This increase in preference was attributed to the fact that OSU researchers were studying SWD as opposed to looking at the fruit. So while fruit produces substances that attract SWD, so too do SWD produce attracting substances. This is what the OSU attractant (which has since been patented) is based on.

SWD preferred the attractant for mating, egg-laying and as a food source, even when offered fruit as an alternative option. The attractant had a 21-day efficacy and reduced SWD infestation by an average of 68.9 per cent.

Now in the third year of field testing, OSU researchers are seeing a significant reduction of in-field crop damage. Unfortunately, and an issue faced by Ward and his European counterparts as well, it takes a significant amount of time to move from science and research into grower fields into the market. Canadian growers will need to continue relying on their chemical management tools along with good field practices for a while longer.

Cultural management is your best bet

“You need to make sure you do the best you can with those cultural methods as well,” Walton adds. “There’s an example of one grower that we’re working with who has two fields. One field is overgrown, lots of vegetation, overhead irrigation and very high pressure. In this field he often needs to apply pesticides more frequently.” Canopy plays a big part in SWD control as there is a microclimate created within the centre of a canopy that is irrigated overhead. Thus, growers must be diligent in ensuring pesticides reach the centre of the canopy to achieve efficacy. Increased canopy pruning is also beneficial.

There are no short-term single-shot solutions for SWD, but with diligent management and conscientious chemical usage, growers may be able to keep ahead of the pest until new solutions arrive.