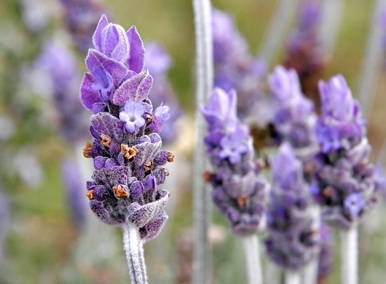 April 29, 2013 – It doesn’t take a meteorologist to figure out that this spring has been much colder than the last few springs, but what does that mean for lavender production?

If any row covers or straw have been used to protect the plants over the winter, they should be removed. Row covers can result in a warm and wet environment around the plants, which can encourage fungal growth. However, if there is a significant amount of new green tissue under the cover, growers should probably wait to remove the cover until after this weekend because hard freezes are in the forecast. We will know more about the effectiveness of row covers and the timing of removal after we assess our overwintering trials in a few weeks.

Lavender in most areas has not begun to green up yet. As a result, it is difficult to know what parts of the plant are alive. Consequently, it is too early to consider pruning plants at this time. Last spring, there was some evidence to suggest that pruning early in the spring can result in damage later on if there is a significant frost. Delaying pruning until there is green tissue can result in the removal of a considerable amount of flower buds. As a result, once plants begin to green up, pruning should be restricted to removing dead plant material, and shaping plants to remove any branches that stick out of the plant. More aggressive pruning should probably wait until after bloom.

The late spring will likely delay all aspects of lavender production. Lavender bloom will likely be delayed by two or three weeks compared to last year, unless temperatures warm significantly over the next few weeks. It has been difficult to time on-farm festivals over the past few years because of fluctuating temperatures. Growers should track different stages of plant growth over the years, such as the start of green-up and the start of bloom for specific cultivars. This will provide a better idea of the range in bloom periods for their specific location. It is best to wait as long as possible to set the date of on-farm activities until there is a better idea of spring temperatures. Growing several cultivars with different bloom periods, including both angustifolia and lavandin types, will spread out the overall bloom period and reduce the risk of having no plants in bloom during an on-farm event.

Once the plants begin to green up, growers should assess different cultivars for winter damage. Some cultivars that performed well last winter may show more damage this year. This past winter had more typical weather for our climate, and growers should expect cultivars that did poorly this year to do poorly in most winters. Cultivars with significant damage this year may be good candidates for trials with row covers next winter.