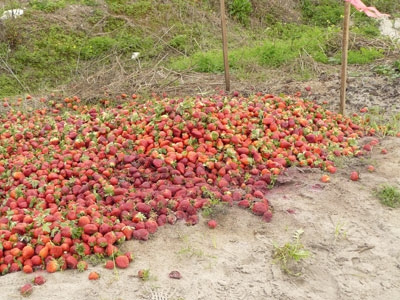 Cull piles such as this are a thing of the past in B.C. Even in Ontario, agriculture officials are urging growers to clean up cull piles within 24 hours. OMAFRA

That is what B.C. Ministry of Agriculture representatives are using to explain to their growers how to help balance the risk associated with the newly emerging fruit pest.

Tracy Hueppelheuser, an entomologist with the B.C. Ministry of Agriculture, recently spoke to members of the Ontario Berry Growers’ Association (OBGA) about SWD and the management steps being taken by fruit growers on the West Coast to control the pest. Key management areas included monitoring, hedgerow management, spray timing, sanitation and harvest.

“The objective is to incorporate chemical and non-chemical approaches to break the life cycle, keeping them from completing a generation, preventing hosts for egg laying, and preventing breeding and feeding sites,” explained Hueppelheuser.

Monitoring
In B.C., scouts and researchers use small cup traps baited with apple cider vinegar to monitor for SWD.

“You want something that works easy, is fast for the scouts to handle and is easy to count flies in,” said Hueppelheuser, adding that many researchers are currently working on developing the perfect SWD monitoring trap. “We don’t want to catch all the flies out there. We just want to look at the curves and how the numbers change over time. This works for us and we’ve been using it since 2009 when we first had the fly.”

Trapping occurs year round in the province with peaks and valleys of insect pressure occurring at somewhat regular intervals, particularly in the later months of the year. According to Hueppelheuser, current models show B.C. experiences about four generations of SWD per year.

“We don’t have winter that knocks them out the same as you,” she said.

“It’s not really practical for growers and packers but it is good for research,” said Hueppelheuser.

With the float method, which is used by most berry packinghouses in the coastal B.C. area, the fruit is put into a plastic bin and a salt or sugar solution is added. The fruit and solution are swished around and stirred up, then left for five to 15 minutes. The larvae pop up to the top and growers count the larvae and know what the infestation level is.

“It’s really important that you have enough sugar or salt in there,” advised Hueppelheuser. “Don’t skimp on the sugar or the salt. We like salt because it’s cheaper, less messy and it’s easier to work with.”

This particular monitoring method works well on blueberries and raspberries but is less effective on strawberries, she added.

While research on insect pressure and monitoring is ongoing, Hueppelheuser said, data so far shows a direct correlation between trap catches and fruit infestation.

“Though we don’t exactly know all the ins and outs of what the trap numbers tell us, I can say with certainty, if you have a lot of flies in your traps, you will have fruit damage,” she said. “Drops [in insect trap catches] happen when there isn’t much fruit left in the field.”

Hedgerow management
When SWD isn’t in the fruit fields of B.C., it can usually be found in nearby non-crop hosts, including hedgerow vegetation. Research to date has found more than 15 wild and non-crop plants that are positive for SWD infestations. The most attractive wild plant for the fruit pest is Himalayan blackberry.

“What we’re saying to our growers is manage non-crop hosts when reasonable to do so,” said Hueppelheuser. “If you’ve got a big bush full of wild fruit behind your property, obviously you’re not going to be able to manage that. But if you have a hedgerow of invasive blackberries, maybe you can manage that.”

She explained the best way to manage hedgerows is through pruning.

“We don’t spray hedgerows. I don’t believe there’s any insecticides actually registered for that,” Hueppelheuser said. “If you prune to prevent flowering … make it so they don’t produce fruit, then you’re going to affect the longevity and the population build up there.”

Spray timing
Crop advisors in B.C. are urging growers in the province to base their sprays on numerous factors, including crop stage, date, pest pressure and weather. The current recommendation in high pressure is spray intervals between seven and 14 days, said Hueppelheuser.

“Your objective with the sprays is to kill the flies before they lay eggs,” she explained. “That’s a tall order, I know, but you cannot control those larvae once they get into the fruit.”

Harvest
Spraying intervals will also have to be managed and timed around harvest, said Hueppelheuser.

“Pick early, pick clean and pick often,” she said, adding that growers shouldn’t be tempted to leave fruit on the plant to ripen. In a research trial using Bluecrop blueberries, which have an optimal picking date of eight to 10 days after colouring, fruit was marked as it started to colour. The fruit was then picked at four, eight, 12 and 16 days after colouring.

The picked fruit was then incubated in the bins based on the day it was picked.

The fruit that was picked four days after it had started to colour showed no SWD infestation. The fruit picked on day eight had a few SWD but numbers were pretty low.

“But once we got to day 12 and day 16, the fruit just got smacked,” said Hueppelheuser. “There was lots of SWD in those late fruit.

“If you think leaving it to hang longer makes it sweeter, that is not the case,” she added. “In the same trial, at day eight, we hit Brix of 12 and then it stayed at 12, eventually moving up to 13 around day 16. You really didn’t gain anything by leaving that fruit hanging there.”

Postharvest treatments, such as freezing, will kill SWD larvae and flies. But refrigeration will not eradicate the pest. Using late-season Elliot blueberries, samples of nice-looking fruit were placed in refrigeration and kept at 0.5 C for one to five days. According to the results, SWD numbers did decline based on the length of time the sample was kept in refrigeration, resulting in a 75 per cent decrease in SWD numbers from the first sample to the last.

“But refrigeration does not eradicate SWD,” said Hueppelheuser. “You cannot use this tool to completely clean up your fruit.”

Sanitation
The way growers manage cull piles has changed immensely since 2009 when SWD was first discovered in B.C. Even windfalls and dropped fruit in the field needs to be managed.

“The flies will complete their development (in the dropped fruit) and move up into the ripening fruit on the plants,” said Hueppelheuser, adding that growers need to find a way to minimize the amount of fruit left on the ground.

“SWD is very susceptible to dehydration so anything you can do to bring down that humidity in the base of the plants or on the ground, consider doing it.”

She said in some cases, growers are burying culls (needs to be at least four feet down), crushing them or even solarizing the off-spec fruit in clear garbage bags.