Ontario offers the best suited climate for vegetable production within Canada (Agri-Food Canada, 2009). Therefore farmers who are producing for the GTA region have a significant advantage over that of other Canadian provinces. The grpah to the left shows the vegetable production in Canada broken down by the value each province produces. It can be seen then that Ontario’s only major competitor able to deliver fresh vegetables to the GTA region is Quebec. Currently Canada’s largest region for importing fruits and vegetables is form the United States. In 2008 it accounted for 1,402,000 tonnes of fresh produce and constituted 77.2% of vegetable imports (Agri-Food, 2009). 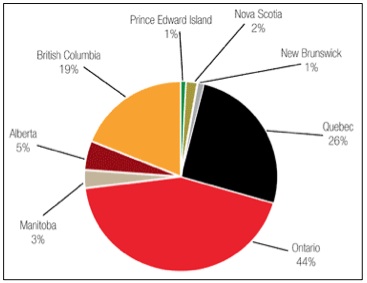 The second largest importer next to the United States is Mexico with 312,700 tonnes in 2008, a number that has shown a 36.7% growth over the past 5 years (Agri-Food Canada, 2009) These imports were made up of conventional western vegetables however, and did not account for ethnocultural produce. Regardless, the volume that is sourced from this region still competes directly with Canadian grown produce. Sourcing ethnocultural vegetables from within Canada has little to no direct competition with regards to the freshness that can be offered. Vegetables grown outside of the country are unable to be packaged, processed, and shipped quickly enough to be able to obtain the same level of freshness. Competition comes from imports that are able to be offered at lower prices due to lower cost of production, and are harvested year round. Currently Canada is supplied with the majority of its cultural fruits and vegetables by farms in the Dominican Republic (Smith, 2011).

These vegetables tend to fluctuate in price with relation to the growing season in Canada. During winter months few alternatives are available and as such products coming from the Dominican are priced at a premium. In the summer months when local product is available these vegetables are set at a minimum price (Smith, 2011). This acts as a substantial price barrier for Canadian farmers since they must then sell their available crops at a reduced rate in order to compete against these import.