B.C.’s sterile insect facility is looking at ways of expanding its work to meet the changing needs of the Okanagan fruit industry, including adapting a computer-modelling program developed by the University of Washington. 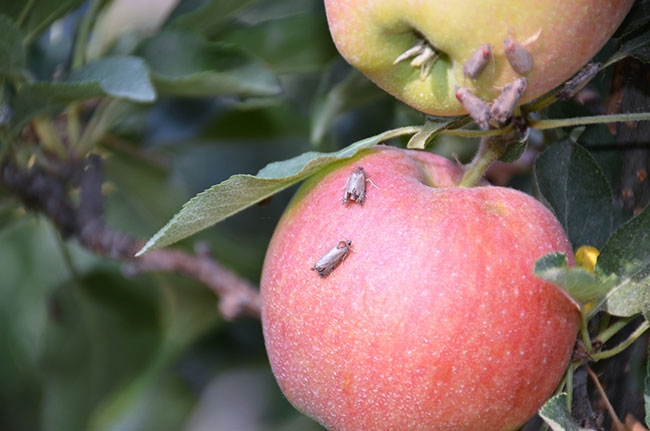 A non-descript building in an industrial park in the Okanagan region of B.C. could be the setting of an Alfred Hitchcock movie.

The Okanagan-Kootenay Sterile Insect Release (SIR) facility rears and sterilizes some 220 million codling moths each year. Although there are state-of-the-art procedures to rear and contain the moths (which are harmless to humans), there are always a few drifting around the hallways. After a tour of the building, a blower dusts any strays off your clothing. But you can’t help wiping at your hair every so often for hours afterward.

Those sterile codling moths are released into area apple and pear orchards throughout the growing season, as the key ingredient in a successful IPM program that has been controlling the pest in B.C. orchards for more than 20 years.

Sterile insect technology (SIT) was developed in the 1930s and first used to control screwworm pests. Scientists at the Pacific Agri-Food Research Centre (PARC) – now the Summerland Research and Development Centre – in the Okanagan town of Summerland perfected how to mass raise codling moths, sterilize them with gamma rays, and release them into pome orchards. When the sterile moths mate with wild moths, the resulting eggs are infertile and no larvae are produced. It’s those little worms that have been burrowing into apple crops in the Okanagan since the moths arrived from Europe in the early 1900s. The SIT interrupts the life cycle of the moths and lowers their populations

Since the beginning of the SIR program, wild codling moth populations have been reduced by 94 per cent, thereby cutting the amount of pesticide used against the moth by 96 per cent.

“We have stories of growers who have not had to spray for codling moth in over 15 years,” says Melissa Tesche, acting general manager of the SIR program.

SIR staff checks pheromone moth traps every week at thousands of sites across the Okanagan and Similkameen valleys. Individual moths are counted, squished and identified as wild or sterile (the sterile contain a red dye).

“If we reach a threshold of moths in a trap we might recommend that a grower spray,” says Tesche.

That would also be based on degree-day information and predicted weather conditions.

Orchard management practices are also monitored, such as the removal of dead woodpiles (the larvae overwinter under bark) and maintaining pollinator and wild trees.

The $ 3.2-million-a-year SIR program is funded through a legislated tax levied to all valley homeowners and fruit growers and that is one of the reasons for its success, says Tesche.

“It’s not a fee for service program,” she explains. “It is area wide and mandatory.”

Every landowner in the region pays a tax that contributes 60 per cent of the costs. The remaining 40 per cent comes directly from apple and pear orchardists.
Backyard trees in the extensive urban-orchard interface zone in the Okanagan are also a focus of the program. Non-commercial host trees close to orchards are a potential source of re-population. Homeowners are legally required to control codling moths on their property (they do not receive SIT). They can spray, or remove all fruit soon after it sets. And they are urged to consider removing trees that they do not wish to maintain. SIR staff continually educate and assist backyard growers with their trees (staff don’t spray). Ultimately, staff has the legal authority to enter a private property, remove a host tree and bill the homeowner, though that is seldom necessary.

With a successful program based on technology, a high level of expertise and a dedicated staff that has “boots on the ground” in every pome orchard in the region, the SIR board is looking at ways of expanding their work to meet the changing needs of the Okanagan fruit industry.

“Whether that includes other pests, other fruits, or other technologies, we are looking at further ways to support growers,” says Tesche.

Staff is currently in their third year of shipping moths to New Zealand.

“It’s working very well. New Zealand is looking to eradicate and they are layering SIT on top of mating disruption,” says Tesche. “We ship the moths out of the Penticton airport on Wednesday, which is Thursday in New Zealand, and they can release them in their orchards on Saturday.”

“We are having on-going discussions with European countries and are working through the various European regulations,” Tesche adds. “We are hoping to get a shipping trial to Italy this summer.”

They are also involved in adopting the Decision Aid System (DAS), a computer-modeling program developed by the University of Washington to support that state’s fruit industry. DAS links real time weather data and forecasting, with pest, disease and horticulture models, to recommend the timing and type of intervention strategies growers can use for pest management.

SIR is the lead agency for the program in B.C. Tesche says the idea came from Okanagan stakeholder meetings of the Climate Action Initiative, a provincially funded program that identified issues relating to climate change scenarios.

“Pest management was seen as the number two issue for climate adaptation, behind water,” she says.

When an operator logs into the DAS (it’s tablet and cell phone friendly) and search for a particular pest, a screen comes up with real time data on weather, degree-days, current conditions/stages of the pest and recommended practices at that stage. A list of interventions can be brought up, including recommended sprays both conventional and organic and their timing, as well as a description of how those interventions will affect beneficials in the orchard.  The program incorporates weather forecasts to make predictions to highlight issues that may be coming in the next week or so.

Tesche says that adapting the Washington tool makes a lot of sense.

“We are getting a model that is the closest to our own Okanagan climate,” she points out.

Indeed, one of the B.C. Tree Fruits Field Services horticulturists has an account and has been using information from Oroville Washington, just across the border from Osoyoos, to help her advise growers.

The University of Washington has been building and operating the program since 2008.  “They have full-time programmers on the project and are constantly fixing bugs and updating the website to make it grower friendly” says Tesche.  “We have been able to buy a yearly subscription that allows us to access their staff without having to become experts in the program ourselves.”

“We will have to adapt it to Canadian and B.C. models and practices,” Tesche points out.

First off, Okanagan weather stations are being linked into the system.

“We are going to use the models that are in there, but we need to have our Canadian scientists and industry personnel look at them and make sure they hold true for this area,” she adds.

“Some of the chemical products from the U.S. are not approved for use in Canada,” Tesche says.

Funding of $90,000 will be provided by a Climate Action Committee grant.  That money will go towards creating and testing a Canadian version. B.C. will provide the data and DAS programmers will work to adapt the system.

“The SIR board have agreed to fund the subscription costs for the next three years, which are around $40,000 [US] each year,” says Tesche. “And they’ll provide some money for adapting the model to Canadian standards.

“We will have a version available for initial beta testing with a small group of growers and personnel during the 2017 growing season.”