Adaptable growers who can develop the necessary supply infrastructure can claim their piece of the economic pie as demand grows for this perennial vegetable.

Changing consumer tastes and rising demand present a valuable opportunity for Canadian growers hoping to cash in on the country’s okra market. But experts say gaps in supply infrastructure still pose challenges for domestic production of the specialty crop.

Okra, a perennial plant, can grow in tropical, subtropical and warm temperate regions and reach up to four to five-feet tall. Its edible green seedpods are used in a range of cuisines, from South Asian and Chinese to Creole, Caribbean, Southeast Asian and West African.

As immigration patterns have shifted, demand for the vegetable has grown steadily over the past several decades. According to Statistics Canada, Asian immigrants – mainly from India, China and the Philippines – are projected to make up 55.7 to 57.9 per cent of newcomers by 2036. In part as a result of this trend, demand for okra is projected to increase by 68.2 per cent between 2016 and 2026, according to a 2018 case study from the Vineland Research and Innovation Centre.

But Evan Elford, a new crop development specialist with the Ontario Ministry of Agriculture, Food and Rural Affairs (OMAFRA), says developing supply infrastructure to replace some of the country’s imports with domestic production can take time.

“Specialty crop markets are very sensitive to new production,” Elford says. “It does take time for growers to adapt, and also markets to adapt, to changing trends and absorb new production. So, even though a lot of interest has been within the last 10 or five years, sometimes it just takes time for production or some of those market opportunities to catch up.”

Today, the bulk of fresh okra in Canada is currently imported from the United States, Mexico and Central America. Data from the 2016 agricultural census counts just 49 acres of okra produced in Canada, with 39.4 of those acres in Ontario. However, Vineland predicts domestic field production of okra will rise from current levels to encompass 30 per cent of the market by 2030, comprising 437 acres with an estimated farm gate value of approximately $24.3 million per year.

In Canada, a typical okra season can start as early as April and run until the first frost hits, usually sometime in September. The crop can be seeded directly on bare soil, but to extend the growing season, Elford recommends growers start their plants in a greenhouse in early April and transplant them once the risk of frost has passed.

At Fiddlehead Farm in Prince Edward County, Ont., Heather Coffey waits until the forecasted nighttime lows are above 10 C before transplanting her okra from the greenhouse into the field.

“We’re very heavy on the transplants because that gives us a bit of a heads-up on the weeds,” says Coffey, who started growing okra two years ago. “We also use mulches to help us control the weeds, so we’ll direct-seed (the plants) in a greenhouse in early April and then we will plant them out into the fields in maybe late May after there’s any risk of (frost).”

Once in the field, okra grows best in raised beds covered with black plastic mulch, according to Vineland’s recommended production practices. Having access to irrigation is also important for the crop, Elford says. Floating row covers and perforated plastic may maximize yield and allow for plants to be sown or transplanted earlier, too, though 2017 field trials conducted in B.C.’s Fraser Valley found that covering the plants increased the presence of aphids as well. 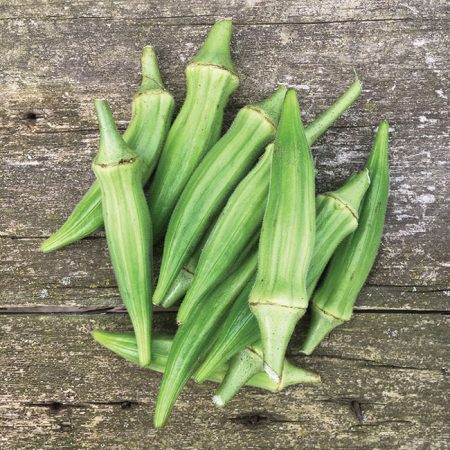 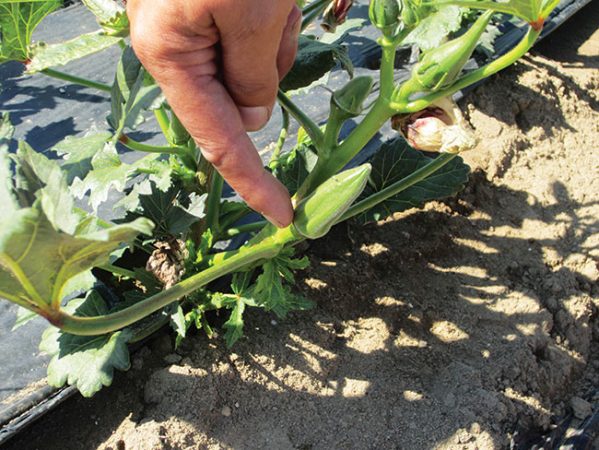 An okra pod grows on a plant during a 2016 field trial in Abbotsford, B.C. Photo courtesy of Susan Smith (B.C. Ministry of Agriculture, Food and Fisheries).

Okra can attract pests such as leafhoppers, two-spotted spider mites and several varieties of beetles, but OMAFRA notes in its okra crop profile that none have posed significant setbacks to growers in the region.

Weeds, however, remain a challenge.

“When the okra plant is growing, it’s very, very delicate, so any competition, it’s not good,” says Indy Kooner, operations manager at Kooner Farms in Caledon, Ont., which has been growing okra for 15 years using a combination of direct seeding and transplants.

But the biggest hurdle for large-scale growers, experts say, is labour. Harvest season can last anywhere from eight to 12 weeks, with peak season taking place in August. During this time, okra must be harvested daily, as its seedpods can quickly become overgrown.

“My experience with okra is two days is probably too much, because those pods just get very woody very quickly,” says Renee Prasad, an assistant professor with the University of the Fraser Valley who conducted the okra field trials in B.C.

According to Vineland, one person can harvest one acre of okra per day, an estimate that aligns with Kooner’s experience.

“It’s a very high labour-intensive crop,” says Kooner, whose farm grows just under an acre of okra. “It has to be picked every single day, so you basically have to go through the plants every day and pick the right ones – not too small, not too big, (they) just have to be right.”

Once the product is off the field, a grower’s knowledge of their local okra market is essential, Elford says.

“With a lot of specialty crops … there’s not a lot of traditional supply chains for being able to sell or market the crop,” he says. “Growers need to be aware that they need to do a lot of that marketing side to be able to sell the crop and be prepared to have some connections there to sell their crop – preferably before they start planting.”

Prasad agrees. Because okra is perishable and the growing season is relatively short in Canada, she says convincing distributors to disrupt long-standing supply chains in favour of domestic production can be difficult for growers.

“The risk from the distributor side is that they have these really well-established supply chains,” she says. “It doesn’t work out, obviously, for a grower in California if you’re going to break a supply chain for six weeks, so there’s a lot of planning that has to happen on all parts of that chain so that Canadian growers can then go into that and be able to provide.”

Location also matters. Rural growers may have the infrastructure in place to tap into wholesale production, Elford says, while growers near big cities might find more opportunities for direct-to-consumer sales. At Kooner Farms, most okra sales are through its farm stand and at farmers’ markets in the Greater Toronto Area (GTA). Depending on the sales channel, Kooner estimates he can get between $3 and $4 per pound.

Meanwhile, Fiddlehead Farm operates on a CSA model, which has helped Coffey gauge demand for okra among her customers.

“We were impressed at the number of CSA members who were very excited about the okra and who enjoyed trying it and who wanted more.”

Ultimately, even though hurdles remain for growers hoping to break into the okra market, demand is not going away any time soon. Whether they are produced domestically or not, Prasad says that doesn’t stop people – including her – from buying okra and other specialty vegetables like opo squash and bitter melon.

“People buy okra. If no one in B.C. grew okra, people would still buy okra, so it would be great if some B.C. growers could be able to get a piece of that economic pie.” •