The native nut has significant potential as a high-value, low-input crop. 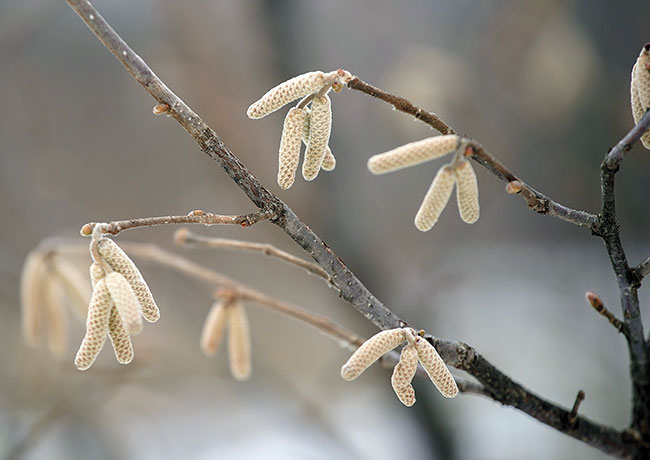 Hazelnut catkins, the male part of the tree that produces and releases pollen, which is carried by the wind to small red flowers (female part), which develop into a hazelnut. All Photos courtesy of Jeffi Tribe.

The backdrop of Hodge’s on-farm drying and storage bins and bank of solar panels is, however, arguably of greater interest to a nascent industry’s development. Hazelnuts are not a hobby for the 50-year-old corn, soy and edible beans and ginseng producer; rather, they’re a potential new commodity for an existing 1,800-acre cash crop operation.

Ferrero’s massive Brantford-area processing plant and the company’s stated enthusiasm for 25,000 acres of domestic hazelnuts provided instant market potential for a crop familiar to Oregon and British Columbia, but little known in Ontario. Field trials followed its early 2000s construction, according to Linda Grimo of Grimo Nut Nursery near Niagara-On-The-Lake, with a “big push” in 2015. Ferrero represents long-term possibilities if production capacity expands significantly and is a driver for interest in hazelnuts, but replacing current Canadian import requirements and developing fresh or local value-added markets are also seen as viable and potentially higher-return options.

Hazelnuts are native to Canada but agricultural varieties were sourced from warmer climes indirectly through the state of Oregon, which accounts for the vast majority of North American production. Climatic limitations mean Canadian orchards are largely in British Columbia and southern Ontario, although colder-weather options are under development.

Hodge began planting hazelnuts with a tape measure and post-hole auger and installing trickle irrigation in the spring of 2018 (fall planting is another option), and is two rows away from 2,700 trees on ten acres, enough “to see where it leads,” he says.

“I call it a ten-acre experiment – I’m not betting the farm on it, put it that way.”

Technical support from Ontario Ministry of Agriculture, Food and Rural Affairs (OMAFRA) staff has been vital, he notes, along with the OHA’s centralized industry development hub and associated resources.

The OHA is currently compiling a marketing report in conjunction with the South Central Ontario Region Economic Development Corporation (SCOR EDC). Identified goals include outlining global and domestic realities with regards to provincial industry development and branding for all growers, from large to smaller acreages.

“A clear pathway as to what the OHA can do to support Ontario hazelnut growers wherever they are on that spectrum,” sums up SCOR EDC executive director Kim Earls. 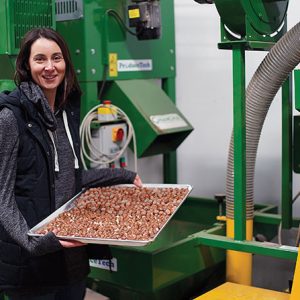 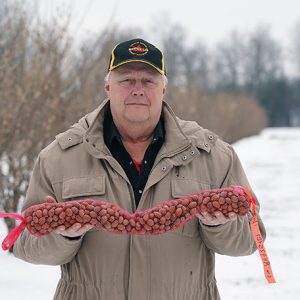 Martin Hodgson of Courtland, Ont., shows off some of his hazelnuts from the survivors of the eastern filbert blight that struck his farm in the early 2000s. 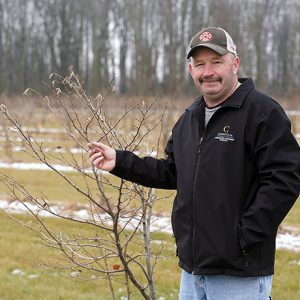 The logistics
Roughly 75 per cent of Hodge’s trees are Oregon varieties – Yamhill, Jefferson and Gamma – popular for the large, consistently shaped nuts required by Ferrero, and also because they were proven, available and provincially field-tested. The balance are so-called “Ontario” varieties including Gene, Cheryl, Linda, Matt and Northern Blais.

An 18-foot grid between rows and trees is a popular layout for mature orchards; however, Hodge opted for double density planting, trees nine feet apart, rows still at 18 ft.,  to accelerate production. Extra trees can eventually be transplanted or sequentially pruned and eliminated. Orchards must include varieties – Grimo recommends a minimum of four – matched for pollination compatibility, concurrent or overlapping emission and acceptance schedules, along with cold hardiness.

“They should be working to cross pollinate each other,” she says, adding a “healthy, well-drained soil” is also crucial.

Hazelnut trees have projected 50 per cent production in five years, full production between eight and 10 years, and can live to 75 years, offering sustainable, high-value, low-input potential. Hodge anticipates a mature harvest of between 1,000 and 2,000 pounds per acre and an “in-the-shell” return beginning around $2 per pound, although he is also considering value-added options.

His crop is fertilized, watered and sprayed for weeds and suckers around the base of trees, pests including gypsy moth caterpillars and Japanese beetles, and preventatively against what Hodge considers its biggest challenge: eastern filbert blight (EFB). Admittedly, its limited emergence in his orchard over the past two seasons is highly concerning.

“Are we able to control it with pruning and fungicide? That’s the big question,” he says.

Three pillars of defence against this potentially devastating fungus are preventative spraying, cutting out and burning any incidence, and proactively breeding or selecting EFB-resistant trees, which can be a lengthy process.

“It’s 17 to 18 years from cross to release,” explains Grimo, whose father Ernie began breeding Ontario-based hazelnuts 45 years ago. Not all varieties are specifically targeted toward Ferrero standards, but are suited for domestic markets and additionally may have regional climatic and EFB resistance advantages. Beyond the three Oregon varieties, Grimo offers six “Ontario selections” either bred by Ernie or selected through a discontinued New York State breeding program.

“And they’ve never had blight,” she says.

Additional blight-resistant varieties being developed under Tom Molnar at Rutgers University are in the pipeline. Although intended for the U.S.’s Eastern Seaboard, they are also hoped to be climatically suitable for this province, Grimo says.

Survival of the fittest
Martin Hodgson of Courtland, Ont., followed unnatural selection to blight-resistant stock, planting 5,000 hazelnut seedlings (clonal propagation is preferred for crop consistency and other reasons) between 1994 and 1997. Hodgson celebrated viable cropping in 2000 before EFB arrived with a “boom,” leaving him with 150 living trees by 2003. Describing the process as Darwinian, Hodgson has plant breeder’s rights to two cold-resistant pollinator varieties developed from the best of the 150, which have lived for 25 years: Norfolk C16 and Chelsea C28. He is also looking at a third production variety which, Hodgson says, “Meets all of Ferrero’s requirements.”

Estimating double-density planting costs between $6,000 and $7,000 per acre, Hodgson suggests hazelnuts are a viable 100-acre farm crop. He recommends beginning with an acre or two to learn the process, ordering trees two years in advance and preparing the soil through testing, balancing and adequate tillage.

“And when you get your friends helping you, leave the beer in the barn until it’s done,” he laughs.

“I’m not going to say we’ve got it down yet, but we’re going in the right direction,” Compton reports.

Nuts were received directly from the field, underwent primary and secondary cleaning and sanitization, were dried in Compton’s repurposed tobacco kilns and kernels cracked out of their shells. Her short-term plan is offering roasted nuts for sale in her own on-farm and other farmer’s markets.

“And to anyone else who wants to come and get them,” she says, smiling.

Compton views consumer education as vital to market development of a product which is neither cheap to grow or process.

“But it’s a beautiful product, a wonderful product; it’s finding those markets that appreciate quality and local,” she notes.

Value-added possibility
Fergus, Ont.-area artisan nut producer Elisabeth Burrow of Jewels Under The Kilt has proof-of-concept for niche nut growing and marketing. Her patented roasting process utilizes maple syrup as a preservative in conjunction with unique flavour profiles built on fresh fruit, vegetables and spices. The two-time provincial premier’s award winner began offering low-sugar, highly flavoured nuts at one farmer’s market in 2013 and was in seven by the end of the season. Burrow currently employs five outside of partner Mitja Kosir and daughter Jessica James and ships across Canada.

“You have so much variety to choose from.”

How are things on the West Coast
If Ontario’s hazelnut industry were to be characterized as “evolving,” the descriptor for British Columbia’s would be “rebounding.” B.C. Hazelnut Growers Association president Steve Hope says at peak, production was over 1.5-million pounds annually from close to 1,500 acres, before a “devastating” EFB infestation wiped out the majority of farms. In its wake, and with support from the B.C.’s Ministry of Agriculture, Food and Fisheries, the approach has been to eradicate older affected or potentially affected trees to reduce EFB pressure, and introduce EFB-resistant varieties developed over the past couple of decades at Oregon State University. Due to climatic similarities, they are also appropriate for British Columbia.

An eight- to ten-year removal and replacement process has seen close to 500 acres of new planting, Hope says, mainly in the Fraser Valley. Skyrocketing agricultural land costs in the lower mainland have contributed to trials supporting expanded hazelnut development in B.C.’s interior, north and on Vancouver Island. The marketing push is twofold, encouraging more farmers to service existing demand, underlined by the “Buy B.C.” tagline.

Hope farms 38 acres of hazelnuts near Chilliwack and is also co-owner of Fraser Valley Hazelnuts, the province’s largest processing hub with a washing/drying capacity of 1.5 million pounds. Historically acting as a receiving station for a major Oregon packer, output has been shifted to meet local demand over the last three years.

“That has maximized the margin for our growers,” Hope says.

Fraser Valley Hazelnuts has added cracking and roasting services for the past two years, creating raw and roasted kernels and is additionally investigating value-added options to meet both expanded farmer production and opportunity, growing the business model along with producers and market demand.

“For the foreseeable future, we’ll be able to keep everything local,” says Hope, who is excited to be part of hazelnuts’ provincial and national evolution, summed up succinctly by Hodge as “learning how to grow, process and market a new crop.”

“It’s interesting to see what the future can be for this industry,” Hope concludes. 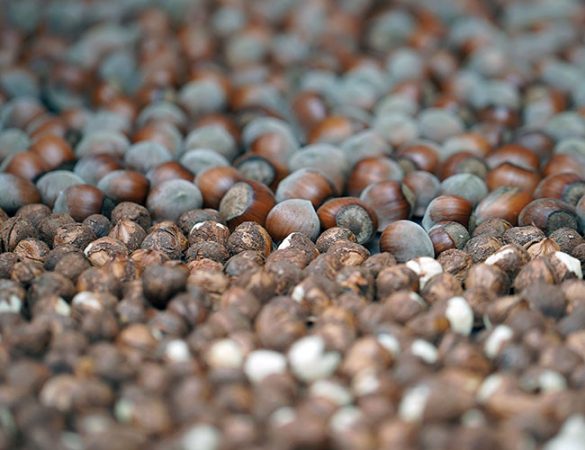