Experts agree that pawpaw makes a great addition to a diversified farm. 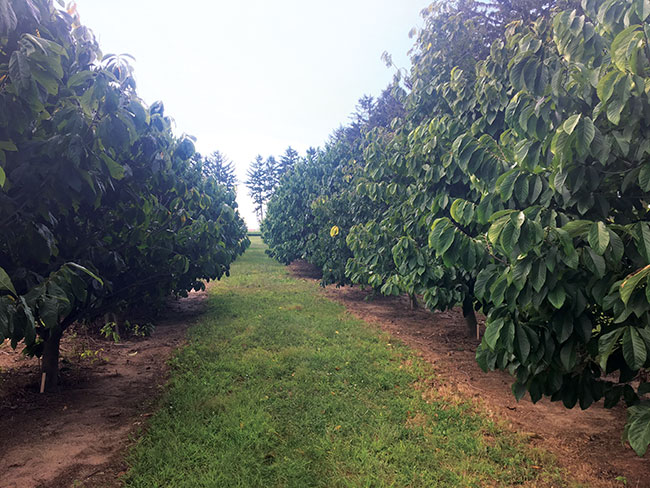 A tree producing fruit that tastes like a combination of mango and banana might seem best-suited to a tropical climate, but the common pawpaw (Asimina triloba) is native to southwestern Ontario; it can also be grown in southern British Columbia and Quebec.

Although the pawpaw is considered one of the oldest native fruits in North America, wild plants are teetering on the brink of extinction. Growers, recognizing the potential in the sweet, custard-like flesh of the fruits, are helping bring the pawpaw back.

“There are over 45 selected varieties and improved cultivars on the market,” says Evan Elford, new crop development specialist for the Ontario Ministry of Agriculture, Food and Rural Affairs (OMAFRA). “In Ontario, we have a few growers experimenting with improved cultivars, but most of the work being done is on native seedlings selected from wild plantings.”

In the past two years, Elford has fielded calls from growers interested in establishing commercial pawpaw production, but the cultivated orchard setting is still an emerging industry.

“I brought seeds in but most didn’t germinate, so I brought plants in from pawpaw breeders in the U.S. But most didn’t survive the winter,” he recalls. “After planting thousands of trees, a few made it through the cold winter and we used the seeds from the fruits of those trees to plant.”

Now, he sells out of all of the seedlings he grows. Although most sales are to backyard gardeners, Taylor has sold pawpaw to small-scale farmers eager to test their commercial potential.

Grimo Nut Nursery in Niagara-on-the-Lake, Ont., has stocked pawpaw trees since the 1990s. The nursery sourced grafted trees from Kentucky and wild cultivars from nearby Beamsville, Ont., testing different varieties that were well-suited to growing in the temperate climate.

The trees “look like dead twigs until late June,” according to Linda Grimo, before bursting into bloom with bright red flowers, large, smooth leaves, and yellow-green fruit. They prefer moist to wet soils high in organic matter. Although pawpaw is an understory species in the wild, Elford suggests growing the trees in full sun to obtain optimal yields and fruit size. Most pawpaw cultivars require two unrelated trees for cross pollination and fruit set. Flies and beetles, not bees, pollinate the red flowers that emerge in spring.

“The pawpaw flowers in late April to early May. In areas prone to later frost, it could damage the flowers, resulting in unreliable fruit set,” Elford says. “A few growers in Ottawa are experimenting with pawpaw, but I wouldn’t suggest growing it below plant hardiness zone 6. It is most suited to plant hardiness zone 6b or higher for commercial production.”

Even in ideal conditions, it takes improved cultivars at least four years to produce fruit. Wild seedlings can take up to eight years to produce the sought-after pawpaw fruit that ripens around October.

Due to their small stature, the labour to harvest pawpaw is minimal and established pawpaw trees face minimal disease and pest pressure. This is good news, as there are no chemical products registered for use on the crop in Canada.

Pawpaw peduncle borer (Talponia plummeriana), an insect that feeds on the roots and stems of small seedlings, and bordered leaf spot (Phyllosticta asiminae) have both been documented on pawpaw in the United States but, according to Elford, no cases have been documented in Canada. 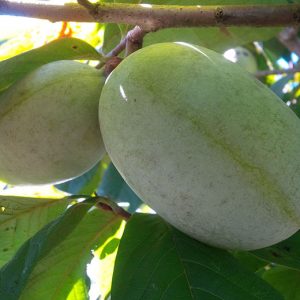 Pawpaw fruit taste like a combination of mangoes and bananas and have a custard-like texture. Photo courtesy of OMAFRA. 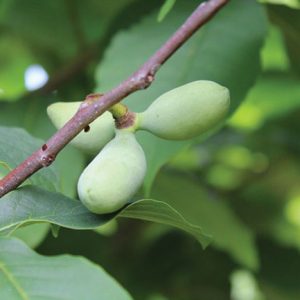 Taking a bite out of the commercial market
While pawpaw grows well in temperate climates, Grimo believes the commercial industry in Canada will remain small. Not only are Canadian growers producing too little fruit to meet the demand from grocery chains, the fruit is finicky, with the skin turning blotchy within days of being harvested. “It has a shelf life of three to seven days and doesn’t ship well when it’s ripe,” she says. “It’s never going to make it in a grocery store.”

In 2012, researchers at the University of British Columbia tried to develop a new cultivar of pawpaw with a longer shelf life and experimented with creating a seedless fruit, but the efforts failed.

Although the shelf life of pawpaw means the fruit might never make it in the supermarket, there is big potential to sell pawpaw at farmers’ markets.

“A local vegetable grower who puts in a few pawpaw trees will see people come to his [farmers’ market] stand because he has something unique,” Taylor says. “I wouldn’t put in 100 trees, but you could plant 25 trees and get enough fruit to do really well in the local market.”

A burgeoning value-added market might also increase interest in commercial pawpaw production. In the U.S., the fruit has been used in ice cream, wine and beer, and as an ingredient in baked goods and preserves. Cooking the fruit affects the flavour, but processing the fruit into pulp is “a critical step in developing a greater food market for this native crop,” according to the University of Kentucky Center for Crop Diversification.

At Green Barn Farm, Taylor hosts annual pawpaw tastings in the fall to introduce consumers to the often-unfamiliar fruit. Torontonians drive 90 minutes to Grimo Nut Nursery for the fresh fruit, where it retails for $6 per pound (prices in Toronto are double that, according to Grimo).

The demand for pawpaw trees is another potential market. Both Grimo Nut Nursery and Green Barn Farm struggle to keep up with the demand for trees, selling thousands of seedlings to backyard gardeners who pay between $25 and $150 per tree.

Although Taylor calls the market “unpredictable” and is honest about the challenges of commercial production, he still believes the pawpaw is a worthwhile crop for Canadian growers in regions where the fruit thrives.

“From the point of view that pawpaw can be grown here and the fruit is a nutritional powerhouse, is enough reason to grow them,” he says. “It has potential [and] we’ve got to get people back to eating Canadian-grown fruit.”

Editor’s note: The printed version of this article, appearing in the April 2021 edition, incorrectly attributed photos to Green Bean Farm instead of OMAFRA. We apologize for the error.