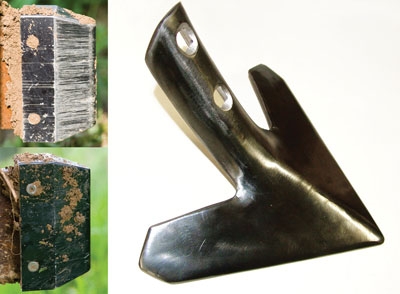 Extremely hard, diamond-like carbon coatings could help farmers to save fuel while plowing and make it easier to till the ground.

Less friction, less power, less fuel – plowshares coated with diamond-like carbon (DLC) slide through the soil like a hot knife through butter. As a result, the tractors pulling them need less power and fuel. In some tests the power required has been reduced by more than 30 per cent.

Extremely hard, diamond-like carbon coatings are used to protect hard disks in computers and ensure that sliding bearings remain smooth. In the future they could help farmers to save fuel while plowing and make it easier to till the ground. Farmers in Germany consume nearly a billion litres of fuel every year to work their land. Around 50 per cent of the energy used when plowing or harrowing is lost as a result of friction between the plowshare and the soil.

To change this, scientists at the Fraunhofer Institute for Mechanics of Materials IWM in Freiburg, Germany, and their partners in the RemBob project are working on DLC-coated plowshares. They have already been able to reduce friction by half. The power required by the tractor has also been reduced, by more than 30 per cent in some tests.

For farmers, the smoothly cutting plowshares mean either a time gain because they can use wider equipment or lower costs for fuel, machinery and maintenance. The tractors can be smaller or can operate in partial load, with longer repair and maintenance intervals.

“From the environmental point of view it would be better for the tractors to be smaller,” says physicist and trained fruit farmer Martin Hörner from Fraunhofer IWM.

They would not only need less fuel but would also be lighter. Lighter machines mean less soil compaction, and the looser the soil, the less power is needed to work it. The quality of the soil would also be better. In highly compacted ground there are hardly any worms and other small creatures that help to turn the soil and enrich it with nutrients. Compacted soils are less able to absorb water and as a result dry out more quickly.

“In Germany we are relatively advanced as far as protecting soil resources is concerned, but even in this country more soil is lost by compaction and erosion than is created by natural processes,” explains Hörner.

A further advantage of DLC coatings on ground-working equipment is the protection they provide against corrosion and wear. Plowshares have to be hard and sturdy but also resilient, so that they do not break if they hit a rock. High-durability steels are used, but they suffer visibly if they are used for a prolonged length of time in the ground.

“A tine on a circular harrow can lose 50 per cent of its mass through wear every season,” states Hörner.

But soil, sand and stones wear down conventional coatings within a very short time. This is why plowshares have not been coated up to now. DLC coatings, however, can withstand the extreme stresses and strains. The problem is that the tough steel on the ground-working equipment deforms too easily and is therefore unsuitable as a substrate for the much more rigid diamond-like coating – it would quickly break or chip. The project partners are therefore testing plowshares made of different materials, including nitriding steel, glass-fibre-reinforced plastic and tungsten carbide, out in the field. The next project goal is to plow at least 20 kilometres of ground before the coating fails.

“If we achieve that, the wear-free plowshare will be within touching distance,” affirms Hörner.