This Prairie berry is growing in popularity in Canada and abroad for its nutritional qualities and cold hardiness. 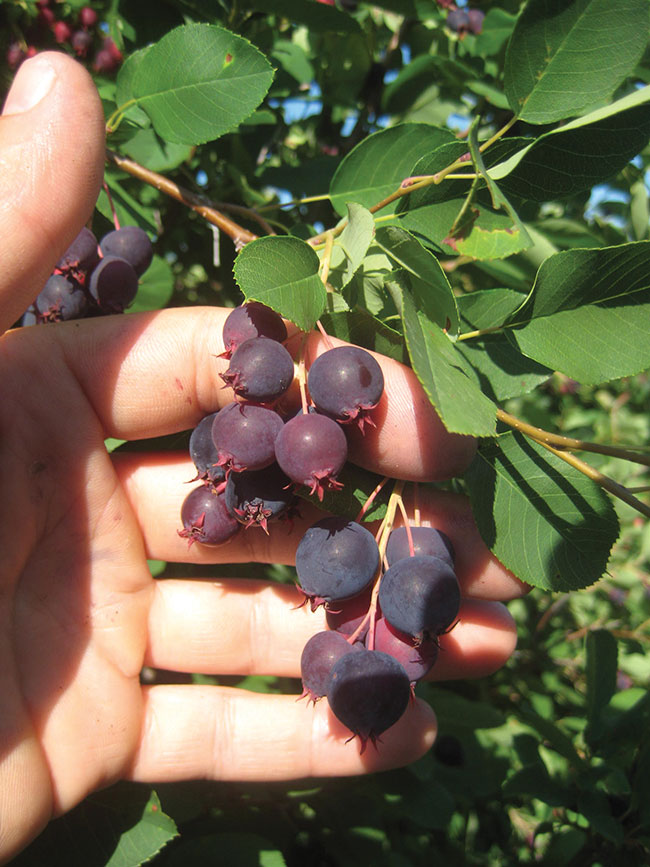 Saskatoon berries are built to survive the harsh Prairie winter conditions, though spring frost can be a challenge. Photo courtesy of Phillip Ronald.

Saskatoon berries, or misâskwatômina in the Cree language, have always been a classic of the Prairie summer season. Grandparents would take their grandchildren to the best berry-picking spots they knew and spend the afternoon harvesting, coming home with purple-stained hands to make pies, preserves and other treats. But within a generation, U-Pick operations and farms producing Saskatoon berry-based restaurant ingredients have exploded in popularity, and some growers are beginning to eye the international market as the berry becomes more widely appreciated for its hardiness, nutritional value and unique taste.

Saskatoon berries have been used by Indigenous peoples on the Prairies for thousands of years. Kevin Wesaquate, an Indigenous artist based in Saskatoon, recently undertook a project to plant Saskatoon berry trees by the banks of the South Saskatchewan River in the city.

“I wanted to add a little something to that urban environment for Indigenous youth in particular. This is about Indigenous food sovereignty, and I think it’s also about cultural awareness in regards to Indigenous identity for these youth that live in an urban environment,” Wesaquate says.

“The berries are sometimes used within families for ceremonial reasons, and some of it is simply the joy of bonding together and sharing from generation to generation.”

Sylvia Kreutzer, owner of Over the Hill Orchards and Winery in Lumsden, Sask., with her husband Dean, says Saskatoon berries are an integral part of Prairie identity for many people.

“For a lot of people who grew up in Saskatchewan or in this area and have moved away, it’s a taste of home,” Kreutzer says. “It brings back fond memories of them picking as a child, or a special dessert that their grandparents may have made for them.”

According to Paul Hamer, when he started planting Saskatoon berry trees 30 years ago at The Saskatoon Farm in Foothills County, Alta., “No one else was doing it.”

Hamer saw commercial potential in the berries because of their enduring popularity.

“They’re native berries and they’re very culturally popular amongst Prairie people. They were historical fruits, going back to [Indigenous] people and the early [colonists] and right through till today, and now new Canadians are discovering them as well,” Hamer says.

“We’ve got many new Canadians coming out to the farm and picking Saskatoons for the first time and enjoying them.”

Many others have had the same idea.

Some of those acres belong to Phillip Ronald, who started growing Saskatoon berries at Riverbend Orchards in Portage-la-Prairie, Man., after researching them during his graduate studies at the University of Saskatchewan. He was impressed by their hardiness, nutritional value and resistance to disease.

“They’ve been here in the Prairie region for thousands of years and they are very well adapted to our climate and soil,” Ronald says. “The fruit is very nutritious, people like the taste of it; it’s very much a Prairie fruit. You’re never going to see winter kill on a Saskatoon berry. They’re hardy, probably to -50 or -60 C – they’re very hardy plants that way.” 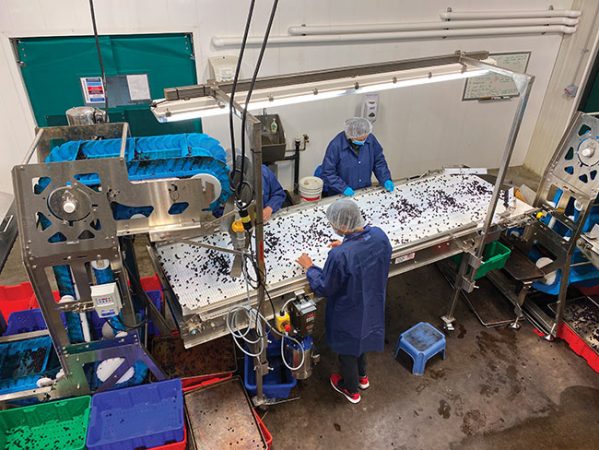 In the last five years, Prairie Berries has expanded the range of products it offers, from purees and concentrates to spreads, syrups and chocolate-covered Saskatoons. Photo courtesy of Jessica Alexander.

Saskatoon berry trees do need about 14- to 16-weeks of dormancy per year, which the long Prairie winters easily provide. While Ronald says this region’s unpredictable spring frosts can damage the flowers and scupper that year’s berry crop, the trees can easily withstand and thrive through other environmental challenges.

“They have a very large root system, so they’re able to harvest moisture and nutrition over a large area,” he says. “So even when it’s dry, they still produce a very nice crop of fruit. Even in the harshest conditions, they still come through and produce.”

As Saskatoon berries have become more widely recognized as a health food, their presence on supermarket shelves, restaurant menus and kitchen tables has grown. Farms like Prairie Berries in Keeler, Sask., which sells many of its products to Canadian restaurants and distilleries, have been following the health food market closely.

“There’s a big push right now for all-natural, non-GMO, vegan food to be introduced into people’s diets, and Saskatoon berries are one of those berries that hit all those health properties that people are looking for – whether it’s antioxidants, fibre, magnesium, potassium, all that kind of stuff,” says Jessica Alexander, marketing manager for Prairie Berries.

“Even just in the last three years, we’ve really seen a shift in companies wanting to use local products. There are companies all over Canada that are looking for fruits and products that are grown and processed in Canada,” she says. “So I think the local shift has definitely helped us get into more of these markets. And it has grown in restaurants, too. They want that unique flavour Saskatoon berries have.”

As farmers look for more commercial markets for their berries, researchers have continued to study the berry’s nutritional value and what other uses they might have.

Nicholas Low, a professor in the University of Saskatchewan’s College of Agriculture and Bioresources, studies the phenolics – naturally-occurring compounds with antioxidant properties – that are found in high quantities in Saskatoon berries.

As more growers are considering shelf-stable products like pressed Saskatoon berry juice and concentrate, Low is studying whether the byproducts left over after the pressing process, like skins and seeds, retain their nutritional value and what other uses they could have.

“You could have a product out of what many people would consider to be a waste product – I call it a co-product stream,” he says. “So if you can produce the juice, and if you can get something from the [byproduct] that’s of value, then you have another marketable material.”

And while many growers and Prairie residents take pride in these berries for their specific local histories and flavours, Saskatoons are also taking root in international markets.

Hamer says he has sold millions of trees to growers on the Prairies and in regions with temperate climates all over the world who want to start or expand their own operations.

“We set people up with Saskatoon farms, and the model that we’ve got can be realized anywhere. We’ve set up farms in Romania, in Finland, in England – they’re becoming a popular fruit,” he says. “We’re talking with someone in China that wants to plant 300,000 trees.”

According to Alexander, growers should keep a few factors in mind when deciding whether to go all in on Saskatoons – but she says the advantages outweigh the challenges in the long term.

“You have to be committed and have a game plan, since Saskatoon berries take about seven to 10 years before you’re going to get full production out of your bushes,” Alexander says. “So it is something you need to consider. But I can tell you that, over the last five years, the industry has grown a lot – and it continues to grow.”

With the rising commercial interest in Saskatoon berries, Wesaquate does worry about the accessibility of a critical and beloved food source in the years ahead.

“The commercialization of plants and products and whatnot is just a little bit too overwhelming. A lot of families can’t afford the prices of these natural berries,” Wesaquate says. “They’re just made a little bit too expensive in these natural food selection stories. The prices seem to keep going up, when it should be just a natural thing to be able to go out onto the land and pick.”

He hopes people will think about the berries “in a future-type context, not in a now-type context:” keeping large farming and U-Pick operations in balance with the little pockets of land in fields and by riverbanks where the Saskatoon berries have always been found and enjoyed.