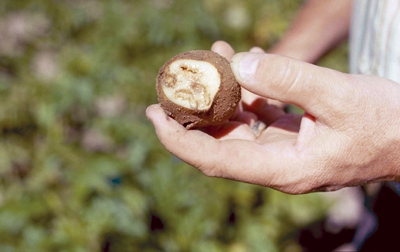 Ring rot derives its name from a breakdown of the vascular ring within the tuber. This often appears as a creamy-yellow to light-brown discoloration. On the outer surface, severely diseased tubers may show slightly sunken, dry, cracked areas.

Bacterial ring rot is an important potato disease and one of the main reasons for rejection of seed potatoes from certification programs. Symptoms include wilting of leaves and stems along with yellowing and death of leaves.

Ring rot derives its name from a breakdown of the vascular ring within the tuber. This often appears as a creamy-yellow to light-brown discoloration. On the outer surface, severely
diseased tubers may show slightly sunken, dry, cracked areas.

Ring rot is caused by the bact-erium Clavibacter michiganensis subsp. sepedonicus. Ring-rot bacteria survive between seasons, mainly in infected seed tubers. They are also capable of surviving for up to five years in dried slime on surfaces of crates, bins, burlap sacks, or harvesting and grading machinery, even if exposed to temperatures well below freezing.

In 2006, the National Bacterial Ring Rot Conference determined that finding more effective disinfectants for prevention of the disease should be a top priority. The Canadian Food Inspection Agency (CFIA) planned and funded a project to compare the effectiveness of sodium hypochlorite, quaternary ammonia and hydrogen peroxide against Clavibacter michiganensis subsp. sepedonicus (Cms) in its biofilm (aggregated cell) and planktonic (free cell) forms. Recently, Ron Howard, a participant in the study, was in Brandon to report the results to Manitoba potato growers attending Manitoba Production Days 2011.

Howard is a research and extension plant pathologist with Alberta Agriculture and Rural Development in Brooks, Alta., where the research was carried out. The project objectives, he says, were to compare the susceptibility of planktonic and biofilm forms of Cms to sodium hypochlorite (SH), quaternary ammonia (QA), and hydrogen peroxide (HP) using various concentrations and exposure times; to evaluate the efficacy of SH, QA and HP against artificial and natural biofilms of Cms on surfaces such as wood, metal, rubber, burlap, plastic and concrete using carrier methods; to identify disinfectants that are potentially effective against the bacterial ring-rot pathogen; to determine the relative effectiveness of various registered and unregistered disinfectants against Cms biofilms on hard surfaces typically found in or on potato storages, machinery and equipment; and to determine if the efficacy of disinfectants can be improved by the additional use of detergents, foaming agents, adjuvants and related products.

The researchers screened 10 commercial and experimental disinfectants against Cms biofilms and Cms planktonic cells using the minimum biofilm eradication concentration (MBEC) plate assay. They followed up by testing the efficacy of several disinfectants against artificial and transferred biofilms of Cms on 10 types of porous and non-porous surfaces using the biofilm eradication surface test (BEST) plate assay. (The MBEC and BEST plate assays were developed by Edmonton-based Innovotech Inc and were chosen as the main testing platforms because they facilitate accurate, high-throughput testing of biocides).

The final step was pilot evaluations of disinfectants against potato pathogens and other microbial contaminants in commercial potato storages using a mobile sanitation unit The study was carried out between 2008 and 2011.

Last season, Howard reports, the researchers visited 10 potato storages in Alberta and Saskatchewan and evaluated the 10 disinfectants used in the laboratory trials – along with One-Stroke Environ and wet steam – using a mobile sanitation unit. The disinfectants were applied to concrete, galvanized steel, stainless steel, painted steel, galvanized tin, plastic, spray-on foam insulation and wood surfaces. The researchers measured surface bacterial and fungal populations before and after cleaning and after disinfection The research findings, Howard notes, demonstrated that the disinfectants were less effective against the biofilm form of Cms than the plankton (free-cell) cultures, especially on porous surfaces such as wood, foam padding, and foam insulation versus those on plastic, metals and rubber.

The effectiveness against biofilms improved with increasing disinfectant concentration and exposure time.

Overall, Howard reports, the most effective disinfectants against Cms biofilms were bleach, SaniDate, Virkon and Hyperox “The mobile sanitation unit proved to be a very useful tool for evaluating different cleaning systems, disinfectants and detergents in commercial storage settings,” he says. “The importance of reducing organic loads and breaking up biofilms before applying disinfectants was clearly demonstrated.”