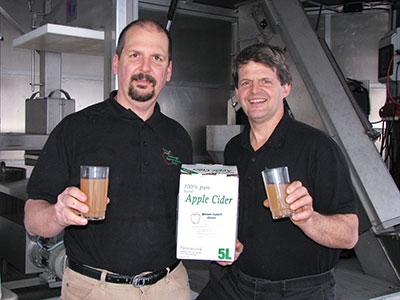 To say that the Geissbergers were busy during the fall of 2013 with their mobile cider mill is a bit of an understatement.

“We did a little bit of pressing in the fall of 2012 when we first got the mill and a bit last spring for ourselves, but things really exploded in September 2013,” says Gord, who co-owns Geissberger Farmhouse Cider with his brother Garry in Clarington, Ont. “There’s been a great response, even though it’s new technology.”

The brothers brought their mobile mill and bag-in-box packaging to about 17 different farms last fall, visiting some sites multiple times.

“We’ve met so many great people in so many beautiful places throughout Ontario,” Gord notes. “We’ve been north of Owen Sound, around Guelph, east of Kingston, at small, medium and large orchards. Everyone’s been so pleased. In some cases, we’ve been back three times.”

For decades, the Geissbergers had used a press custom built by their dad’s cousin from Switzerland, but knew around 2011 that they needed to replace it.

“We did a business plan and contacted a press manufacturer in Austria,” Gord remembers. “We discovered that the company’s Canadian contact was Frank Deiter, who owns Mobile Juice Factory in Vernon, B.C., and he suggested going with bag-in-box packaging and one of his customized portable mills.”

Gord says what really caught their attention was the no-refrigeration nature of the packaging, with no preservatives needed. The cider stays fresh unopened for a full year, and for three months once opened.

“This really changes things for the orchard owner,” Geissberger explains. “Refrigeration equipment is expensive, and if that can be removed from the equation, it becomes much more cost-effective to make cider.”

The fact that this packaging keeps unopened cider fresh for a year also means growers can press all their apples at the peak of their flavour, rather than storing some for later processing.

“It all adds up to fewer costs for producers and tastier cider for their customers,” Gord sums up. “This system also allows you to use the apples that you wouldn’t think of, the small and large and so on that are not number 1 grade, so it gives orchard growers another revenue stream for juice apples. If you were to sell your juice apples to a large company, you get .06 cents per pound, and this way, you can get about ten times that. And because we come to your farm, it means growers for whom buying a press isn’t feasible can carry cider as a product for the first time.”

Before they bought the unit, the Geissbergers did their research, and tried samples themselves to make sure the claims about shelf life were true.

“We got a bag-in-box from Mobile Juice Factory and had some cider, and then left it on the counter for three months and it was still great at the end of that time,” Gord says.

In mid-2012, they took the plunge and purchased one of Deiter’s custom-made mobile cider mills (there are another three being used in B.C. so far).

“You have everything on the trailer – the pasteurizer, the packager, spray washer, shredder and press,” Gord explains. “Frank came out and worked with us for two days, showing us how to do the cleaning and so on, and that was really good because it’s a little intimidating at first.”

Due to shipping problems, the Geissbergers did not receive their new mobile mill until late October of 2012.

“Although we missed a lot of the 2012 season, we really consider it a blessing in disguise because by starting slow it gave us time to learn the system,” Gord explains, “and it gave us time to develop the type of products we want to represent our business.”

Mill in action
To have the Geissbergers visit your orchard, you need a minimum of six bins (120 bushels), which can come from your farm and from neighbours’ farms as well.

“We hook up to your potable water source, and the apples are loaded into the washer,” Gord explains. “Although the fruit will pass through a high-pressure washing system, we strongly recommend that fruit should be relatively clean and tree-picked without obvious dirt and debris.”

The apples are mashed, put through a hydraulic packing press, filtered and then pasteurized. The system can process about 40 bushels in an hour into about 500 litres of cider.

The almost completely dry mash can be used as fertilizer, compost or animal feed. Gord says the pulp is being sold to hunters for deer season, but that they’re also working on other ideas for it. While the bag can be filled with juice only once, the cardboard box can be reused many times (or recycled).

“We give $1 off to our customers who bring their box back,” Gord says. “The boxes stand up for a long time, and have room for each farm’s custom label.”

Although Gord and Garry were impressed with it, at the same time, they were quite nervous about the bag-in-box packaging because they had not seen it used for apple cider before.

“We weren’t sure if customers would respond well because they can’t see the product,” he says. “But people love the fact that they can put it on the counter and it doesn’t take up space in the fridge. People try the cider, love it and buy more.”

Their packages have even appeared on the CBC television show Dragon’s Den.

“Frank asked us if we would mind letting him borrow our mill and use some of our product in April 2013, so we brought it to Toronto to the CBC studio, they took it up 10 floors, and it was our cider that the Dragons tasted,” says Gord. “Frank got a deal. It aired again in November and a lot of people saw it and commented to us at a holiday market event.”

“Our wives, and my and Wanda’s three daughters Samantha, Melody and Melinda help out,” says Gord. “We have friends, Joe and Dale, that help out as well. We love to visit other farms, and it’s like a mini apple festival at each farm when we come, says Gord. We tell people to advertise ahead of time, and put us in a visible location so their customers will be able to see the cider being made and ask questions. We also tell them to put out samples. People buy the cider once they taste it.”

“We’ve done a cider with about 20 to 30 per cent carrots,” Gord says. “It’s a smooth finish and a little more orange in colour. At one orchard, we did an apple, carrot, beet mix that tasted really good. It was very red. We’ve done some apple-pear as well.”

Receiving two awards in 2013, the Geissbergers were recognized for their use of bag-in-box packaging through the Ontario Farm Fresh Marketing Association in February and also received an Ontario Leadership in Agricultural Innovation Award for the implementation of the mobile apple cider mill from Premier Kathleen Wynne in October.

“We are greatly honoured with the recognition, and it’s still overwhelming,” says Gord.

However, tradition is still important. The Geissbergers are still on a section of their grandfather Hans’ farm, and still care for a few trees that were planted by their dad in 1960s. In the near future, they have plans to expand the orchard and grow varieties that complement the flavour of their cider.