June 16, 2018  By University of Florida Institute of Food and Agricultural Sciences 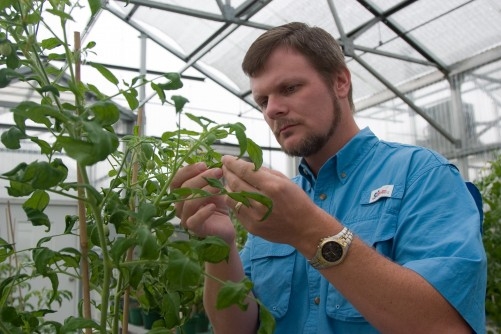 Gary Vallad, a UF/IFAS associate professor of plant pathology, will work with scientists at Penn State and Maryland to see if they can get a group of fungi to help control Fusarium wilt on many crops. UF/IFAS photography

A group of fungi might fight a disease that’s dangerous to tomatoes and specialty crops. University of Florida scientists hope to develop this biological strategy as they add to growers’ tools to help control Fusarium wilt.

Using a $770,000, three-year grant from the USDA, Gary Vallad, associate professor of plant pathology, hopes to harness the advantages of fungi known as trichoderma to fight Fusarium wilt.

Trichoderma are ubiquitous fungi in soil and on plants, and they have been used in agriculture as biological control agents, he said.

UF/IFAS researchers have used trichoderma to try to control pathogens, but with little to no success. With this new round of research, they hope to understand what factors limit the fungus’ benefits as a biological control agent, Vallad said. That way, they hope to develop ways to increase its ability to control Fusarium wilt.

Growers began using other fumigants as methyl bromide was gradually phased out from 2005 until it was completely phased out of use in 2012, Vallad said. As growers tried various ways to control diseases, including alternative fumigants, they saw a re-emergence in soil-borne pathogens and pests on many specialty crops, including tomatoes, peppers, eggplant, watermelon, cantaloupes and strawberries, Vallad said.

When the project starts July 1, UF/IFAS researchers will do most of their experiments on trichoderma at the GCREC, but they’ll also use crops from commercial farmers during the project.

Vallad emphasizes that their research goes beyond Florida’s borders. Studies in Pennsylvania and Maryland will likely focus on small to medium-sized farm operations.

“We are focusing on tomato production Florida, Maryland and Pennsylvania,” he said. “We hope that our findings will help improve management of Fusarium wilt with trichoderma-based biological control agents.”