October 12, 2017By University of Wisconsin 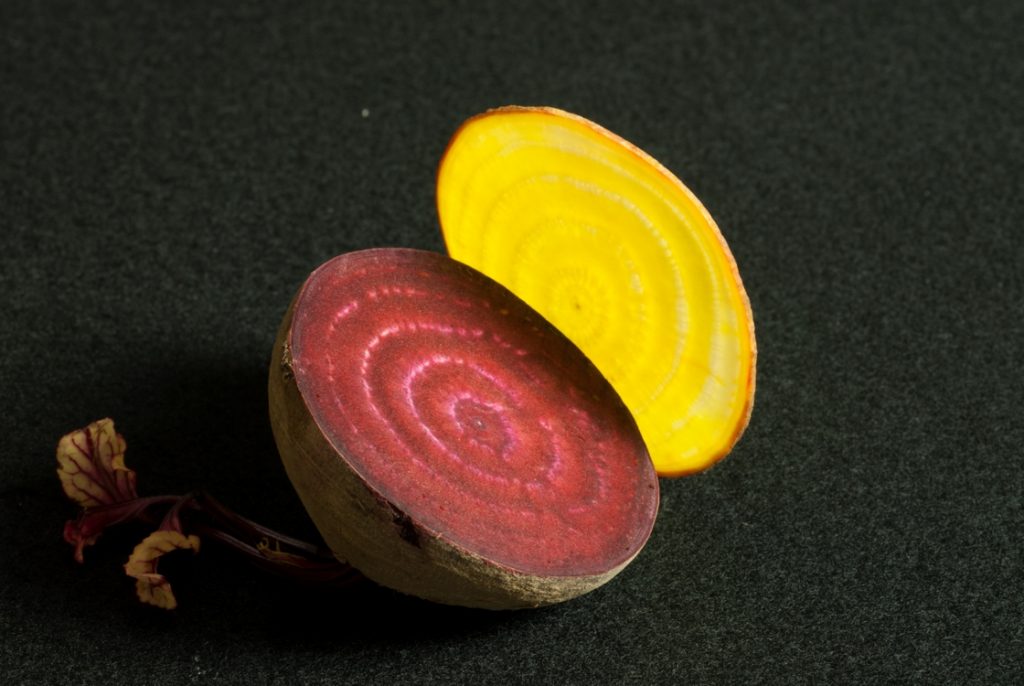 Slices of different coloured beets show the presence of betalains, a class of yellow and red pigments unique to the wider beet family, the Caryophyllales. Sarah Friedrich

But if you put a ruby raspberry up against a crimson beet and look closely, you might just notice: they are different reds.

Millions of years ago, one family of plants – the beets and their near and distant cousins – hit upon a brand new red pigment and discarded the red used by the rest of the plant world. How this new red evolved, and why a plant that makes both kinds of red pigment has never been found, are questions that have long attracted researchers puzzling over plant evolution.

Writing recently in the journal New Phytologist, University of Wisconsin-Madison Professor of Botany Hiroshi Maeda and his colleagues describe an ancient loosening up of a key biochemical pathway that set the stage for the ancestors of beets to develop their characteristic red pigment. By evolving an efficient way to make the amino acid tyrosine, the raw material for the new red, this plant family freed up extra tyrosine for more uses. Later innovations turned the newly abundant tyrosine scarlet.

The new findings can aid beet breeding programs and provide tools and information for scientists studying how to turn tyrosine into its many useful derivatives, which include morphine and vitamin E.

“The core question we have been interested in is how metabolic pathways have evolved in different plants, and why plants can make so many different compounds,” says Maeda. “Beets were the perfect start for addressing the question.”

The vast majority of plants rely on a class of pigments called anthocyanins to turn their leaves and fruits purple and red. But the ancestors of beets developed the red and yellow betalains, and then turned off the redundant anthocyanins. Besides beets, the colour is found in Swiss chard, rhubarb, quinoa and cactuses, among thousands of species. Betalains are common food dyes and are bred for by beet breeders.

When Maeda lab graduate student and lead author of the new paper Samuel Lopez-Nieves isolated the enzymes in beets that produce tyrosine, he found two versions. One was inhibited by tyrosine – a natural way to regulate the amount of the amino acid, by shutting off production when there is a lot of it. But the second enzyme was much less sensitive to regulation by tyrosine, meaning it could keep making the amino acid without being slowed down. The upshot was that beets produced much more tyrosine than other plants, enough to play around with and turn into betalains.

Figuring that humans had bred this highly active tyrosine pathway while selecting for bright-red beets, Lopez-Nieves isolated the enzymes from wild beets.

“Even the wild ancestor of beets, sea beet, had this deregulated enzyme already. That was unexpected. So, our initial hypothesis was wrong,” says Lopez-Nieves.

So he turned to spinach, a more distant cousin that diverged from beets longer ago. Spinach also had two copies, one that was not inhibited by tyrosine, meaning the new tyrosine pathway must be older than the spinach-beet ancestor. The researchers needed to go back much further in evolutionary time to find when the ancestor of beets evolved a second, less inhibited enzyme.

Working with collaborators at the University of Michigan and the University of Cambridge, Maeda’s team analyzed the genomes of dozens of plant families, some that made betalains and others that diverged before the new pigments had evolved. They discovered that the tyrosine pathway innovation – with one enzyme free to make more of the amino acid – evolved long before betalains. Only later did other enzymes evolve that could turn the abundant tyrosine into the red betalains.

“Our initial hypothesis was the betalain pigment pathway evolved and then, during the breeding process, people tweaked the tyrosine pathway in order to further increase the pigment. But that was not the case,” says Maeda. “It actually happened way back before. And it provided an evolutionary stepping stone toward the evolution of this novel pigment pathway.”

The takeaway of this study, says Maeda, is that altering the production of raw materials like tyrosine opens up new avenues for producing the varied and useful compounds that make plants nature’s premier chemists.

For some unknown ancestor of beets and cactuses, this flexibility in raw materials allowed it to discover a new kind of red that the world had not seen before, one that is still splashed across the plant world today.