September 22, 2015  By University of Florida Institute of Food and Agricultural Sciences 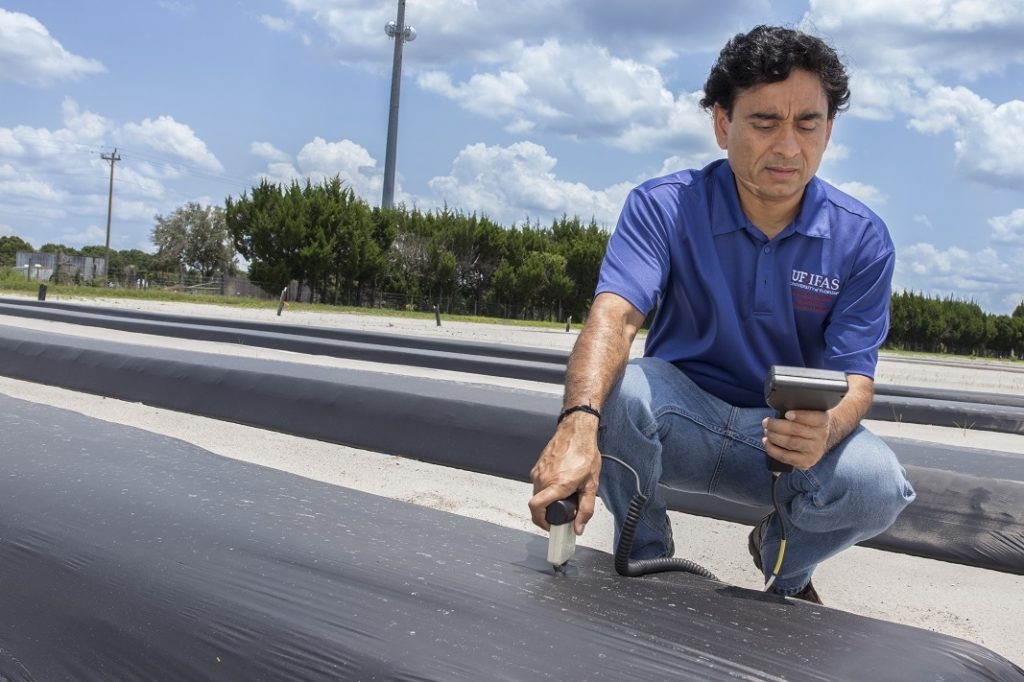 September 22, 2015, Gainesville, FL – Sanjay Shukla looked out over row upon row of tomato and pepper plants and had an idea: What would happen if he made the compacted soil rows taller and more narrow? Would the plants need less water, fertilizer and fumigation? Would the plants grow as tall? Would the plants produce as many vegetables?

And so, instead of planting rows that were normally six to eight inches high and about three feet across, the University of Florida professor planted them 10 inches to a foot high and 1.5 to two feet across. Instead of needing two drip lines to irrigate each row, they required only one. In addition, they needed fewer square feet in plastic mulch covering. He calls it “compact bed geometry” or “hilling.”

Shukla, who specializes in agricultural and biological engineering, was astounded by the answers.

Not only did the tall narrow rows grow the same amount of vegetables, they retained more fertilizers – reducing what would have leached into groundwater – and they would need half the amount of water. In addition, he cut fumigation rates for pests by as much as 50 per cent.

He estimates the revamped rows could save farmers $100 to $300 an acre, depending on the crop, the setup of their farm and how many drip lines they use per row; with a 1,000-acre farm, that can add up to a $300,000 savings. If used statewide, the potential cost savings for vegetable growers who use plastic mulch, could run into millions per crop per year.

“I’m looking at a business solution – you do this, you save money,” said Shukla, whose primary interest is water quality and supply issues. His location at the UF Institute of Food and Agricultural Science’s Research and Education Center in Immokalee puts him at the northern edge of one of the most delicately balanced environments in the world – the Everglades. “And oh, by the way, it’s better for the environment.”

By using less water and plastic, he explained, fields will be less flooded and, thus, water contaminated with fertilizer is not being discharged into nearby lakes, streams and rivers.

Several farms have already adopted Shukla’s tall, narrow rows, including a 2,000-acre tomato farm. Chuck Obern, who grows eggplants and peppers at C&B Farms in Clewiston, has switched 140 acres of eggplants and estimates he has saved at least $500 an acre on the cost of drip tape for irrigation, fumigation, and the pumping of water and fertilizer.

Obern said he is excited to see what Shukla can do for his pepper crop in the fall.

Shukla’s discovery is vital, as Florida is already struggling to provide enough water for an ever-increasing population. The state has seen a 32 per cent increase in population since 2005 and, according to the Florida Department of Environmental Protection, the state will likely not be able to meet the demands for water – 31 million cubic meters per day – by the year 2030.

Shukla says his next step is to explore if the compact bed geometry will work elsewhere. If it does, it has the potential to help improve agriculture globally.

“I’m hoping to go to California and Georgia to learn about their production systems and see what can be done at a larger scale,” he said.