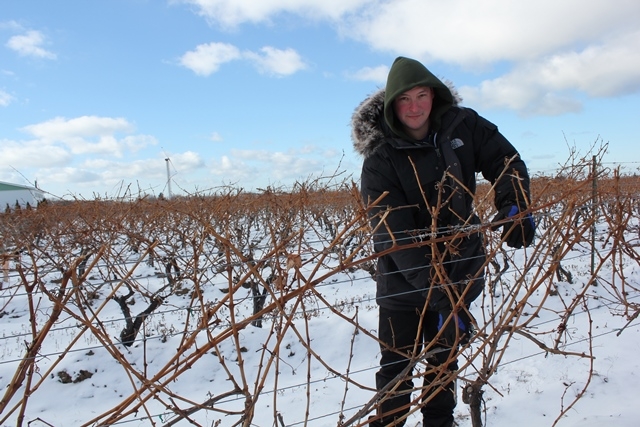 St. Catherines, Ont. – The glass is half full when it comes to grape and wine research in Ontario. And it’s only getting fuller thanks to the efforts of Brock University’s Cool Climate Oenology and Viticulture Institute (CCOVI).

The research institute, established in 1996 in partnership with the Grape Growers of Ontario, the Wine Council of Ontario, and the Winery and Grower Alliance of Ontario, has tackled significant vineyard and winemaking issues, elevating local tipple to world-class status in the process.

It’s done so by taking on the multi-coloured Asian lady beetle, which can taint an entire vintage, and kept many bottles of wine tasting their finest in the process. It has 20 years of research dedicated to icewine production and authentication to ensure integrity for Canadian versions of the sweet nectar.

The effects of climate change on grape growing, sparkling wine production, and resveratrol and the Ontario wine industry also get serious research attention at CCOVI to the benefit of Ontario vintners and grape growers.

Most recently, CCOVI received nearly $2 million in funding from the Canada Foundation for Innovation and the Ontario Research Fund to build its one-of-a-kind Augmented Reality, Virtual Reality and Sensory Reality Consumer Laboratory. It will be known as R3CL and will be the world’s first mediated-reality wine laboratory, combining sights, smells and sounds to help researchers study the science of consumer choice in the wine industry.

CCOVI’s research is so vital to the industry that an economic impact study pegged its contribution to the Ontario economy at $91 million annually. It also creates the equivalent of more than 300 jobs a year thanks to its research outputs.

Some of the most significant impacts can be credited to its cold hardiness research and flagship VineAlert program, which warns grape growers about cold weather events so they can use their wind machines and other techniques more effectively to protect their vines from cold damage.

VineAlert spared more than $7 million in crop losses in 2014-15, which converted to nearly $74 million in wine sales.

But CCOVI and its team of scientists, led by director Debbie Inglis, aren’t stopping there. Their work is positioning CCOVI to be the Canadian centre of excellence for cool climate viticulture, oenology, wine business, policy and culture with a mandate to advance the industry nationally, not just locally.

CCOVI’s intrepid VineAlert program is being rolled out across Canada thanks to partnerships in Summerland, B.C., and Kemptville, N.S. Equipment and testing methods to determine cold hardiness are being tried on for size in both provinces right now.

“We’re hoping within the next year that we’re going to be able to make the VineAlert program national,” Inglis said.

The Fizz Club, which provides professional development, and shares knowledge and research among sparkling wine producers also went national in 2017. And CCOVI is developing a domestic, certified “clean plant” program for grapevines to supply the industry with plant material that’s free of disease.

“The larger impact has been in Ontario but we’re starting to branch out and see that impact across Canada,” Inglis said.