Kelly Daynard with Farm and Food Care shares tips on how farmers can talk to consumers. 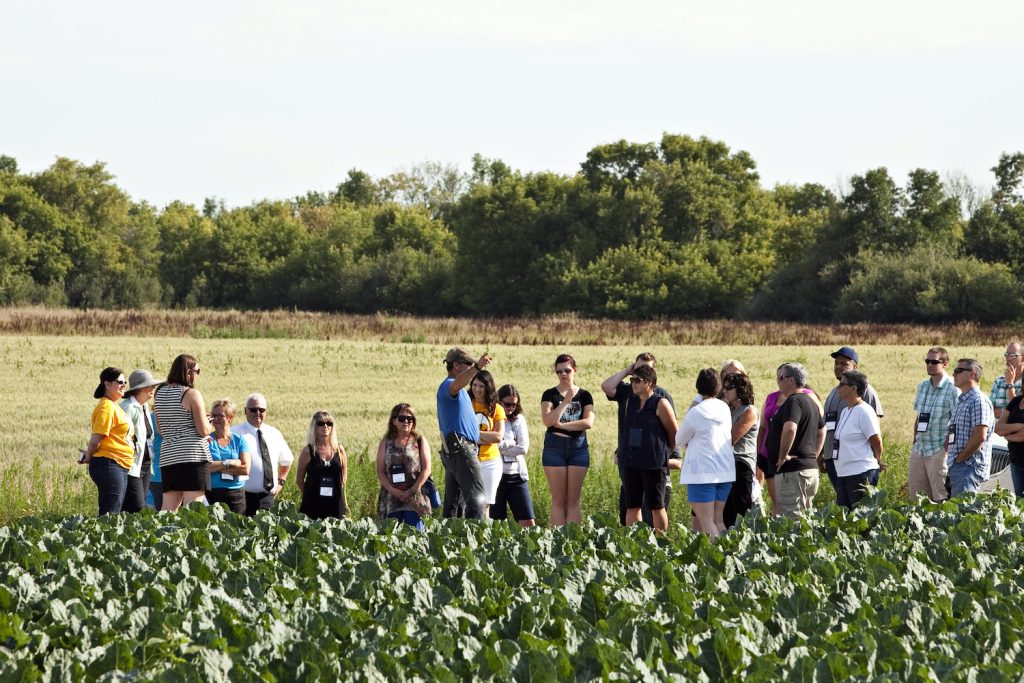 Farm and Food Care, which has chapters in Ontario, Saskatchewan and P.E.I., host farm tours where consumers can ask questions directly to farmers. This photo was taken at Craven Riverside Gardens, a 400-acre field vegetable farm located in the Qu'Appelle Valley, Sask. Photo courtesy of Farm and Food Care Saskatchewan.

At the Southwest Agricultural Conference held in Ridgetown, Ont. in early January, Kelly Daynard, executive director of Farm and Food Care Ontario, presented on talking to consumers about food and farming. Daynard’s presentation covered high level tips and tricks on how to talk to consumers in an engaging way and answer questions about what farmers do.

Q: What have you seen that are some of the biggest fears consumers have about agriculture?

Daynard: The top four [fears] have not changed the whole time I’ve been working in this industry. They are genetically modified organisms (GMOs), pesticides or herbicides, the use of antibiotics and hormones. Those are still the top questions and if I had to get into top 10, it would be organic versus conventional, factory farms versus family farms, and so on. But people genuinely want to know that the farmers growing their food care for it, that they are doing the right thing and that they are passionate about it.

Q: How can producers help bridge this gap?

We need a small army to tell our stories, and we’re such a small percentage of the population. [Daynard’s presentation showed that less than three percent of consumers live on farms. In 1931, one in three Canadians lived on a farm, today it’s one in 46.]

But if everybody, I always say, if everybody took 10 minutes a day, five days a week, 50 farmers would equal one person with more credibility than a girl like me working in an office in Guelph. Everybody has a story to tell, and they need to play their role in telling it.

Q: In a 2016 report by The Canadian Center for Food Integrity, Canadian’s impressions of farmers grew to be warmer and favourable than any other group with an increase to 69 per cent from 61 per cent in 2012. Doctors, friends and family, and humane societies followed right after in the ranking, with food industry associations ranking the lowest.

Farmers aren’t the same as public relations professionals, but you did mention tips and trick for how they can be better communicators. What are some of the tips you have for farmers when it comes to engaging with the public?

Daynard: Number one is, not to be afraid to tell your story. And wanting to tell that story and taking every opportunity that you have. You might be the only farmer that somebody ever meets, or the only person that works in agriculture, talking about what you know. You can never get into trouble by talking about what you do in your day to day world.

So, what do you do in your agribusiness? What do you do on your farm? How do you harvest those crops? How do you choose what crops you plant? You can’t get into trouble telling those stories.

Also, keep videos/[photos] on your phone. So if somebody asks you a question, you can say, ‘Well, hey, I can show you a video of me spraying last year’ or [‘This is what the farm looks like.’] We’ve got this amazing technology that everybody carries around in their pocket, so keep the assets on your phone that you need to help tell your story.

Knowing who you’re talking to. Instead of immediately starting with your answer, ask the person who’s asking you the questions, a few questions. Have you been to a farm? What do you know about farming? Asking those kind of questions gives you a better context of who you’re talking to and what their concerns are. And then media 101 is when you finish answering a question, stop talking, because you can sometimes get yourself down a whole rabbit hole.

Knowing who you’re talking to. Instead of immediately starting with your answer, ask the person who’s asking you the questions, a few questions.

Also, think about terminology. So talking about being a farmer and your farm, versus being a producer or a grower and your operation. People might not know what those terms mean, but they do have quite a warm connotation to the words farmer and farm.

Q: Farmers operate in niche production spaces and fruit and vegetable producers don’t know everything about chicken production or the dairy industry. What can you do if a consumer is asking questions about farming, but not the type of farming you do?

Daynard: I think that’s a common problem. Somebody meets a farmer and they think that even though if you grow carrots in the Holland Marsh, you’re going to be an expert on chicken production. And we know that’s not true, but the average consumer has just said, ‘Oh, I’ve just met a farmer and I’m going to ask the 27 burning questions I have.’ So you can help by referring them, saying, ‘I grow carrots and onions and I don’t raise chickens, but I can refer you to somebody who does.’ You can’t get yourself into trouble by saying, I don’t know. 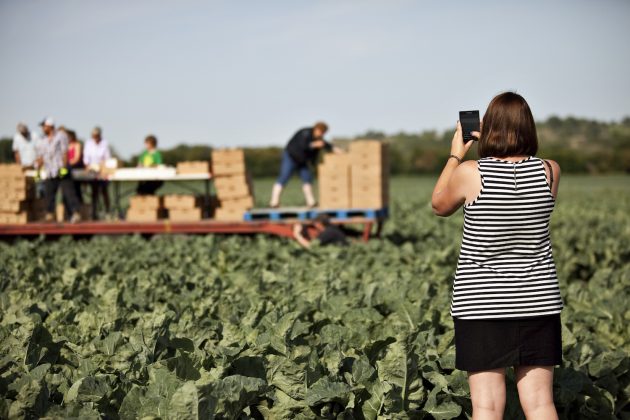 Daynard says farmers can keep photos of their farm on their phone to show people they meet what their day-to-day actually looks like. Photo courtesy of Farm and Food Care Saskatchewan.

Q: You said there’s no value getting into “food fights,” can you explain why?

Daynard: We are so blessed to live in a country with so many food choices and you know, North America is dazzling in its food choices. I think sometimes social media creates a few little monsters who feel free to just pick at the world. I always say, think before you tweet or before you put up a post or you retweet something.

Andrew Campbell who’s a well-known farmer just outside of London, Ont., said a couple years ago, ‘Social media is like toothpaste. Once it’s out of the tube, you can’t put it back in.’ And that is such a good example for me. You don’t need to pick a fight. If you’re an organic grower, you don’t need to pick a fight with a conventional farmer, at least not publicly – have your discussions offline, by all means.

The beauty of Ontario agriculture, Canadian agriculture, is that there’s room for all of us. There’s a market for everything, and they’re equally doing a good job, and they’re equally producing food for this country. I’ve always said it at Farm and Food Care, I’m not going to tell people how to shop. I’m not going to tell you what label to buy. But buy with knowledge.

Q: What is your response to the critics that say Farm and Food Care Ontario is funded by agriculture corporations and farmers are paid to say certain messages when they partner with the organization?

Daynard: So I’m never paid to say anything. I’ll use the Real Dirt on Farming booklet as an example. We do need support from all across Canada, from ag businesses and community groups to put that publication out. But the sponsors of that booklet, as an example, have no say in what goes into that booklet.

I would say that, yeah Farm and Food Care is not unbiased, but neither are other organizations, right? But we are third party, and that’s funded by entirely by farmers. We used to get criticized because we were government funded, so we got rid of the government funding model and we are entirely funded by farmers and farm organizations and agribusiness who believe in the need to tell our story. I am never going to be ashamed for saying yes, I represent farmers, but I’m not selling you the pork chop that you buy on your plate. I’m just giving you information.

[For our farm tours], I’ll take a group of foodies out to an organic farm one year, and a conventional farm the next year. It doesn’t matter to me, I just want people to buy with an educated choice in mind.

Somebody told me last year that Farm and Food Care tells farmers what to say. I would say that I have met so many farmers, and I have yet to meet one farmer that you can tell what to say. The beauty of this industry is everybody’s an individual running their own business, their own way, and I’m just giving them tips and tricks for engaging with the next consumer they meet.

Q: Where can producers go to for information on communicating with the public?

Daynard: I’d say start with our website: farmfoodcare.org or my sister group in Saskatchewan farmfoodcaresk.org.

There are many resources. There’s a whole tool kit there on how to run a farm tour, how to do a media interview, how to do a school visit, and the Real Dirt on Farming booklet is a really good resource just to keep in your back pocket.

So when you do meet that person that might need more information, reaching out and saying, ‘Hey, here’s something that’s written by a third party organization in Ontario. Maybe it’ll have something for you in it.’

[For more, listen to Kelly Daynard, executive director of Farm and Food Care Ontario, and John Jamieson, CEO of the Canadian Centre for Food Integrity, talk about connecting with consumers in the latest episode of AgAnnex Talks.]

Editor’s note: Parts of this interview were edited and condensed for clarity.