May 16, 2008  By Applied and Environmental Microbiology 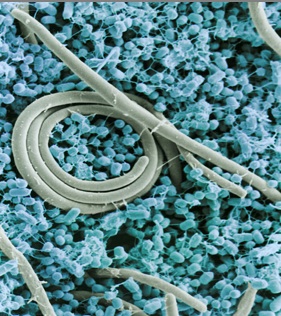 They reported their findings in the April 2008 issue of the journal Applied and Environmental Microbiology.

The Centers for Disease Control and Prevention reported that fresh produce was the most significant source of food-borne illness in 2005. Protozoa are single-celled organisms whose main function is bacterial consumption. They are commonly found in the natural microflora of plants and several species of amoebae have been associated with fresh salad vegetables. The recent occurrence of multiple outbreaks has encouraged researchers to further examine the interaction between food-borne pathogens and protozoa.

In the study, protozoa (Glaucoma sp., Colpoda steinii, and Acanthamoeba palestinensis) as well as the soil-borne strain, Tetrahymena pyriformis, were cultured from store-bought spinach and lettuce and washed and allowed to graze on green fluorescent protein- or red fluorescent protein-labeled enteric pathogens including E. coli O157:H7, S. enterica, and Listeria monocytogenes. They were then monitored for their ability to sequester the bacteria and for vesicle production (food vacuoles released by protozoa offering a means of protection to some bacteria).  Results showed Glaucoma produced vesicles with all bacterial strains and Tetrahymena also displayed vesicle production, but only of E. coli O157:H7 and S. enterica, not L. monocytogenes. Further studies of E. coli O157:H7 following vesicle production revealed that four hours after the addition of spinach extract, the bacteria had multiplied and escaped the vesicles. C. steinii did not produce any vesicles from any of the pathogens.

“The presence of protozoa on leafy vegetables and their sequestration of enteric bacteria in vesicles indicate that they may play an important role in the ecology of human pathogens on produce,” say the researchers.