Protective netting for apple trees has benefits beyond preventing hail and sun damage. 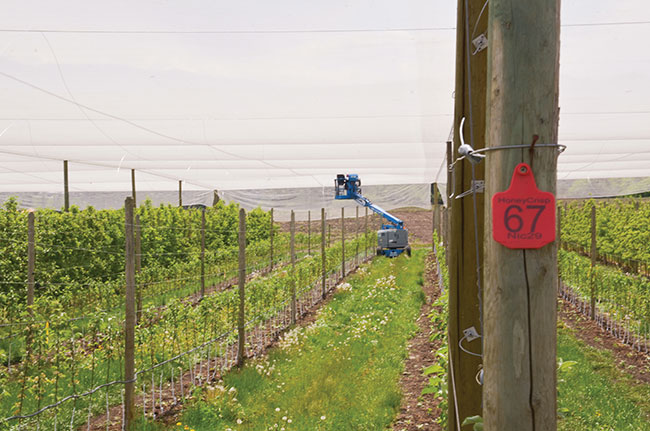 Under the recently installed protective netting at Davison Orchards in the North Okanagan region of British Columbia. All photos by Tom Walker.

Protective netting has a wide range of benefits in apple production. While netting is primarily installed to protect apples from hail and sunburn, there are a number of additional advantages, as well.

A recent installation in the North Okanagan region of British Columbia reveals a variety of positive results. In May 2019, Farm Solutions, a Summerland, B.C., company, installed 10 acres of protective netting for Davison Orchards at a property located just northwest of Vernon, B.C. With the assistance of a $128,000-grant from the Canadian Agriculture Partnership (CAP), Farm Solutions rigged a polymer net to cover 10 acres of Honeycrisp, Ambrosia and Gala apples. An adjacent 10-acre block serves as control.

“Honeycrisp are a difficult apple to grow well,” says Tom Davison, owner of Davison Orchards. “But they are a favourite with our customers.” The high-value apple is a winner for the agri-tourism farm and protecting them makes good business sense.

Netting systems have developed in two styles. The high rigged system used in the North Okanagan is often described as “continuous over the top.” It completely covers an orchard block and is slung between large diameter posts at a height of 15 to 20 feet. An over-the-top system can also be enclosed with side netting to reduce insect and bird predation as well.

Drape netting, the second style, is becoming popular in Washington state. Initial costs are lower, as it can use existing high-density trellis systems, and there is also significantly less labour and equipment involved for seasonal set up and take down. Drape netting can also be cinched at the bottom to provide insect and bird protection.

The primary objective of the Okanagan installation was hail protection; a cost-benefit comparison was reported by Hank Markgraf, a long-time tree fruit specialist based in Kelowna B.C. “The initial cost of the netting was $16,500 per acre and the first thing we looked at was cost recovery,” Markgraf says. “We were lucky – or unlucky – to have hail events the two years following the install.”

A hailstorm in the 2019 growing season damaged 86 per cent of the uncovered control block, while there was zero damage under the net “roof,” Markgraf reports. Using a crop average of 70 bins per acre, with Gala returns at an average of $200 per bin and Honeycrisp returns of $350 per bin, a grower would be protecting a Gala crop worth $14,000 per acre and a Honeycrisp crop valued at $24,500 per acre. “Based on those numbers, the return-on-investment time would be 1.17 years for Galas and .68 years for Honeycrisp,” Markgraf says. “After the second hailstorm we had in 2020, the nets had paid for themselves.”

But hail does more damage than just affecting the current crop of fruit. There is physical damage to the canopy, which increases the risk of a fire blight infection in the damaged trees. Hail can also damage the developing buds that are preparing for the next season, leading to a reduced crop the following year. For young trees, any leaf or branch damage can cause a serious setback in the early years of growth.

Another benefit of protective netting is to modify the environmental conditions of the orchard block. The shade the netting provides – up to 30 per cent light reduction – has several positive effects on growing conditions, particularly in the Pacific Northwest. 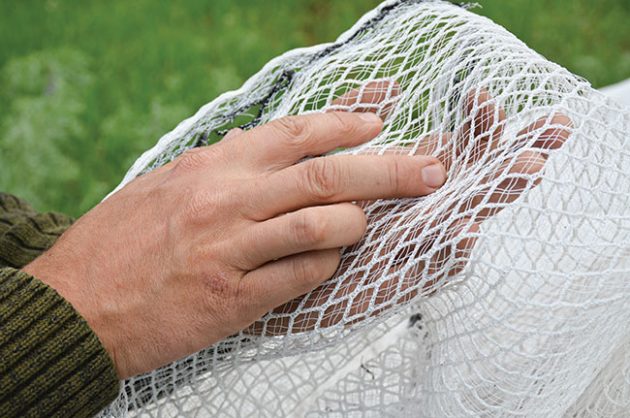 The polymer netting is primarily installed to protect apples from hail and sunburn, but there are a number of additional advantages, including reduced irrigation.

“Eastern Washington can have weeks of temperatures over 40 C,” notes Joel Carter, owner of Farm Solutions. “Even at my own orchard in Summerland it gets to 40 C a couple of times each summer.” His company has installed around 700 acres of netting over Washington apple orchards.

Intense light and high heat combine to cause sunburn in apples. The fruit absorbs the sun’s rays and, while trees can cool themselves through transpiration, the apples cannot, and they become very hot. Studies at Washington State University have found apple temperatures can be as much as 11 C warmer than air temperature on a bright, hot day. If the air temperature is 35 C, the apple surface may reach 45 C – a temperature that causes sunburn. In 2017, a Washington State University study found sunburn reduction in Honeycrisp ranging from 16 to 26 per cent under protective netting. “If you are getting that 70 bins to an acre of Honey[crisp]s and you are losing even 10 per cent to sunburn, that’s seven bins,” Markgraf says.  “At $350 a bin, you are losing $2,450 an acre.”

“We have to remember that Honeycrisp was developed in Minnesota and, although farmers want to grow it for the higher returns, it is a challenge in that heat,” Carter says. While there is only a slight reduction in temperature under the nets – perhaps 1 C, according to Carter – the air heats up more slowly and maximum temperatures are reached later in the day compared to uncovered blocks. Honeycrisps get stressed in high heat, resulting in the trees closing their stomata and reduced photosynthesis. “The trees ‘shut down’ down,” Carter explains.

Shaded trees are in the “sweet spot” longer, are less impacted by heat stress and spend more time growing in ideal conditions. This can support canopy growth in their first couple of years after planting and consistent fruit development when they reach bearing age.

“At the end of the day I am harvesting light, and if I can even that light out in a harsh climate like we have here in the Pacific Northwest, I can gain in production.”

Lower temperatures and higher humidity under the net also mean less water is required for irrigation. “We found approximately a 20 per cent reduction in irrigation – that’s a big one for us in the Okanagan, as orchards now pay for their water as well as pumping costs, and drought conditions are expected to increase with climate change,” Markgraf says. “We also use overhead irrigation for cooling and to reduce sunburn, so if you don’t have to install overhead and you don’t need water to run it, that’s a further saving.”

Mike Versteegh is an apple grower near London, Ont. He has “over the top” netting installed to cover 20 acres of Honeycrisp and Ambrosia apples.

“It’s primarily for hail protection and it definitely does the job,” Versteegh says. “I believe we are getting a lot more hail than we used to when I was younger.”  He says he also gets a reduction in sunburn as well. “We get lots of days in the low 30s and it can reach 35 or 36 C.” Ontario growers don’t need the extra cooling of an overhead sprinkler system.

There are some downsides. Versteegh points out the effects of lower light on fruit maturity and colour. “Any apples under the nets are definitely a few days later to mature and take longer to colour up,” he says, adding he does use reflective ground covers, which can work under the nets.

Markgraf adds, “The night temperatures don’t drop as much under the nets, so we might pick five to seven days later while we wait for full color.”