Okanagan cherry producer tests a small section of its 590 acres under plastic covers as a way of protecting against splits and increasing Brix levels. 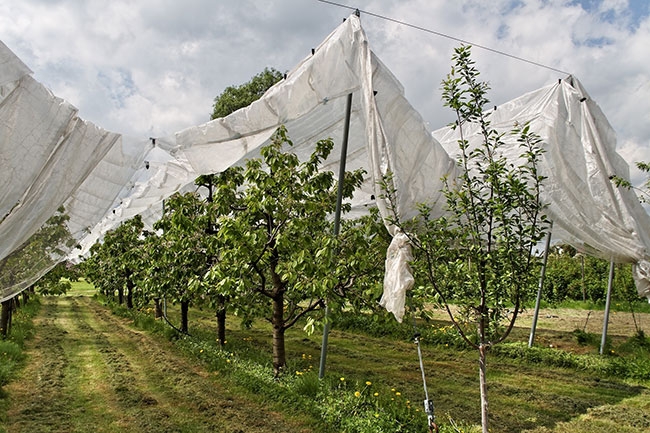 It takes the work crew at Jealous Fruits about one week to hang the covers on 10 acres of orchard. Photo: Dreamstime

The 2016 Okanagan cherry harvest was plagued with multiple rain events.  Across the valley, growers were scrambling to hire helicopters as a method of blow-drying their crop. For a large company like Jealous Fruits, that bill can run to hundreds of thousands of dollars in a wet year, according to Graeme Ritchie, operations and logistics manager.

“We are very aggressive in our drying program,” Ritchie says. “We use a combination of wind machines, helicopters and tractor towed blowers.”

Despite these efforts, crop losses from weather damage can range from 20 per cent to total failure.  To compound things, certain cherry varieties are more sensitive and bruising can occur with the blow-drying methods.

“We are always looking for a better way of doing things,” Ritchie says.

This has led the company to install and test 10 acres of orchard covers.

Jealous Fruits has 590 acres in cherry production at various sites across the Okanagan Valley. The company is the largest vertically integrated cherry producer in Canada and the most northern operation in North America. They are based in Lake Country, 30 kilometres north of Kelowna, on the shores of Okanagan Lake.

If a rain storm soaks a cherry orchard during the last couple of weeks before harvest, there is a risk the fruit will absorb some of the water through the skin. That extra moisture, particularly combined with warmer temperatures, may contribute to expanding the fruit size. A cherry does not grow more skin, or cuticle, it simply stretches and becomes thinner. Stretch too far and the cherry splits and cannot be sold in the fresh market.

In 2010, David Green, Jealous Fruits president, planted a new 14-acre block of Rainiers, Stardust, and pollinators on an old cattle ranch across Okanagan Lake. The site is in a pocket valley with a top elevation of 2,250 feet. The trees are on Mazzard rootstock and a central leader system at seven-foot spacings.

“In 2012, the company installed a set of Voen row covers on 10 acres and began testing the results,” Ritchie says. “It made sense to look at some way of protecting our blush cherries; they are our highest value cultivar.”

Industry FOB prices can be up to $7.50/lb in export markets.

“They are a tender fruit that is prone to split,” he adds.

Indeed, the 2016 uncovered crop of Stardust in the block was abandoned on the trees after extensive rains in July des-
troyed more than 70 per cent of the fruit.

“We became involved with the Climate Action Initiative [developed by the B.C. Agriculture Council] meetings in 2014,” Ritchie says. “Strategies for dealing with severe rain events was one of the priorities noted by the committee and we shared the work we were doing with rain covers.”

The Climate Action Initiative had funds available to support work on local adaptation strategies. As Jealous Fruits had already installed and started evaluating the orchard covers, they received funds to cover about 50 per cent of the costs to set up and take down the covers and to conduct and report on the study. Funding requires that they share the results with other growers in the province.

The Voen steel infrastructure is permanently installed and the covers are hung in the weeks leading up to harvest.

“The orchard remains uncovered through fruit set and up to several weeks before harvesting,” Ritchie says. “We conduct the exact same spray, fertilizer and irrigation program as we would for any other block.”

It takes the crew about a week to hang the covers on the 10 acres.

“We try to leave the covers off as long as we can to give the fruit the most natural development as possible,” Ritchie says. “It is hard to trust the technology and get the timing perfect.”

Ritchie shared the results of the 2016 season. The early spring [flowering was some two weeks early] and frequent rain and windstorms in late June and July were a good test of the covers effectiveness.

On June 22, ahead of the Voen cover set up, fruit was sampled to establish percentage of splits from the extensive rains. Results showed a total of 28 per cent splits, with 11 per cent nose splits, 17 per cent side splits and no bowl splits. There was also three per cent rot. The fruit was still pale in colour and sizing in the 10.5- to 11.5-gram range.

The Voen covers were set up over the week of June 23 to June 30 and any damaged fruit was removed from the trees under cover.

The uncovered Rainiers were harvested July 7 with no further impacts. While the crew waited for the covered fruit to continue to ripen, Mother Nature threw a pop test.

“We had a severe storm on July 8,” Ritchie recalls. “The wind curled back the tarps so they let in water and the rain came in sideways under the covers.”

First colour pick was on July 12, followed immediately by the second pick. Even though the crop was covered, damage to the Rainiers was an additional 20 per cent.

“The covers are certainly not fool proof,” Ritchie says. “But they are one more preventative measure.”

Ritchie says their data shows that temperatures under the covers are on average three degrees higher during the day, and 0.3 degrees higher at night. Humidity during the 2016 season was quite variable given the rain and wind events so more data is needed. No powdery mildew was found in either the covered or uncovered blocks.

The covers do cut down light transmission and Jealous Fruits has worked to counter this. They summer prune non-producing branches that have grown since the spring, and leaf pick to expose the ripening fruit. They are also working with Extenday ground tarps to reflect light back up into the canopy.

“We really have to get the covers up a lot earlier this year, for a better comparison between the two,” he says. “There is a lot of skepticism towards covering up. Colour, size and fruit firmness play such a huge part in our markets, particularly with the blush varieties. We are always discussing when is the right time to put them up.”

As fourth generation cherry growers, the Greens are now looking at working in a different habitat.

“It’s been a learning process for the team,” Ritchie says.

And the cost? The infrastructure for a Voen system [poles, wires and fasteners], together with the covers, is in the area of $28,000 per acre installed, Ritchie says. The cost to hang the tarps in the spring and take them down for fall storage ranges between $2,500 and $3,000 per acre, depending on the experience of the crew and equipment used. Ritchie says there are mechanical systems that are available to do that work and he believes they would save growers money in the long run. Summer pruning and leaf picking ran $3,029 per acre. Those costs need to be balanced with the potential for less fruit damage, the high FOB price and an average production on this blush block of five tons per acre.

“[The 2017 season] will be the final year of our formal study,” Ritchie says.  “But we will continue to see if the covers can prove out.”