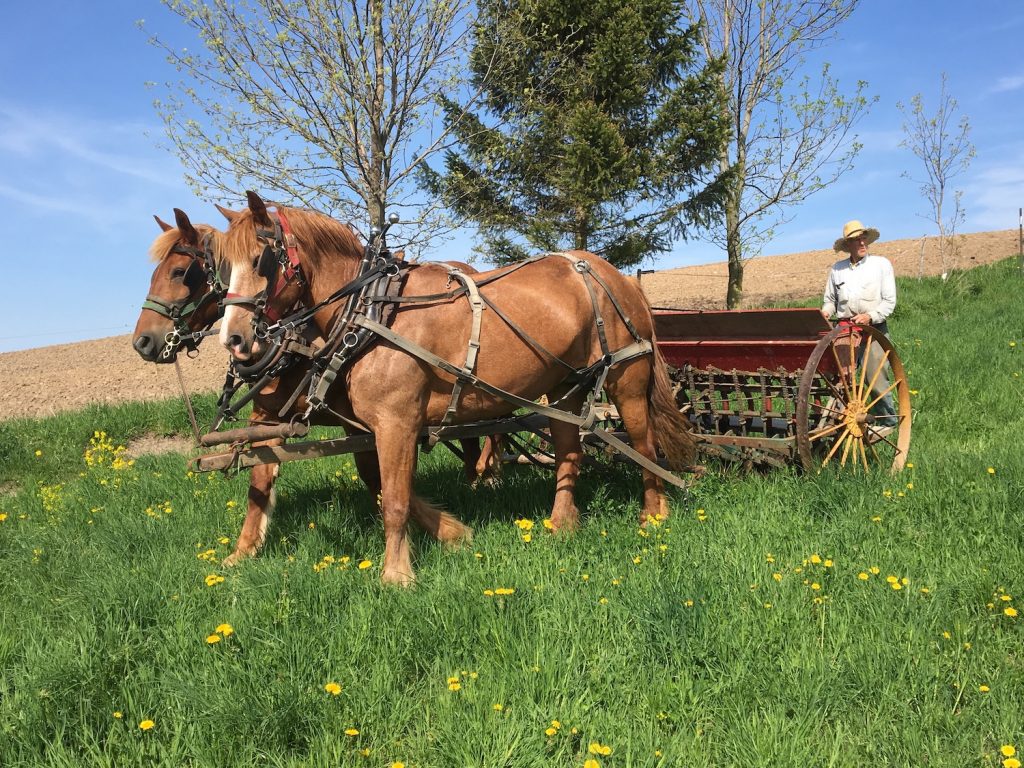 Tony McQuail with the farm’s horses. Photo courtesy of the McQuails and the Meeting Place Organic Farm.

After a decade away from the Huron County farm she grew up on, Katrina McQuail took over the 100-acre Meeting Place Organic Farm in 2015. While intent on making her own stamp on the farm, Katrina remains steadfast in her commitment to the environmentally beneficial practices her parents Tony and Fran have lived and farmed by since 1973.

Those practices include organic certification. The McQuails have maintained the organic status of their apples, as well as pastured pigs, grassfed cattle, and broiler chickens for three decades. In addition to their commitment to organic, the McQuails have actively incorporated regenerative agriculture and holistic management into their operation.

The McQuails have maintained the organic status of their apples, as well as pastured pigs, grassfed cattle, and broiler chickens for three decades.

Regenerative agriculture is a movement that, among other things, encourages the sequestration of carbon in soil and the mitigation of the effects of climate change. It does so through specific on-farm practices such as reduced tillage, longer crop rotations, cover cropping, and incorporating grazing livestock. Holistic management began as a method for planned rotational grazing, but now extends beyond livestock management and into the ecological and economic factors that influence the regeneration of farmland and the resilience of farmers and their communities.

Although the farm’s primary production focus has increasingly been direct-to-consumer pastured meats, the farm continues to produce organic apples and vegetable seedlings in line with both organic and regenerative principles. Their specialties include a diverse selection of heirloom tomato, as well as broccoli, bok choy, leeks, cabbage, peppers, eggplant, brussels sprouts, and lettuce seedlings.

The McQuails don’t see their livestock as separate from their fruit and vegetable operation. Rather, they see these systems as necessarily integrated. This perspective can be observed in their use of draft horses instead of tractors wherever possible. While the approach might be seen as inefficient by some, the McQuails see it as an investment in the long-term health of their soils and the ecosystems of their farm. The farm’s cattle spend much of the year on pasture. They are moved to fresh grass daily, leaving previous areas fertilized and giving each grazed area time to recover and regrow.

The McQuails don’t see their livestock as separate from their fruit and vegetable operation. Rather, they see these systems as necessarily integrated.

“Some might regard our orchard management approach as benign neglect, but we actually work with nature,” writes Katrina’s Dad, Tony. “Many years ago we introduced a tiny parasitic wasp for the tentiform leafminer, and it is no longer an issue in the orchard. We used compost and mulch around the trees to rebuild the earthworm population which had been the collateral damage of the previous spray program. Under the winter snow, the earthworms take the apple leaves underground which adds to the soil organic matter, and significantly reduces the overwintering scab inoculum.”

“Many years ago we introduced a tiny parasitic wasp for the tentiform leafminer, and it is no longer an issue in the orchard.”

For the McQuails, who are founding members of the Ecological Farmers Association of Ontario (EFAO), these practices are an expression of their commitment to producing food in a way that maintains the ecological health of land and water.

“One of the hopeful and exciting things for me is that ecological and regenerative agriculture offer us so much,” writes Tony. “If you are concerned about climate change, agriculture that builds soil organic matter actively sequesters carbon while at the same time building soil that is more effective at dealing with both drought and deluge. If you want food quality and nutrient density, a biologically active soil is the place to start, producing healthy plants and animals.”

Organic certification can be seen as a burdensome process by some, but the McQuails’ commitment to organic agriculture, holistic management, and regenerative practices has actually allowed them some flexibility in responding to environmental stressors. When the summer of 2016 brought severe drought, they modified pasture management and grazing patterns to give plants more space and time for regrowth. Far from feeling limited by their commitment to these practices, Katrina and her family take advantage of a resilience that only comes from deep knowledge of their land and respect for its natural cycles.

Tom Piekarski is a policy and research coordinator for the Organic Council of Ontario. OCO represents more than 1,300 certified organic operators across the value chain, as well as the businesses, organizations, and individuals.