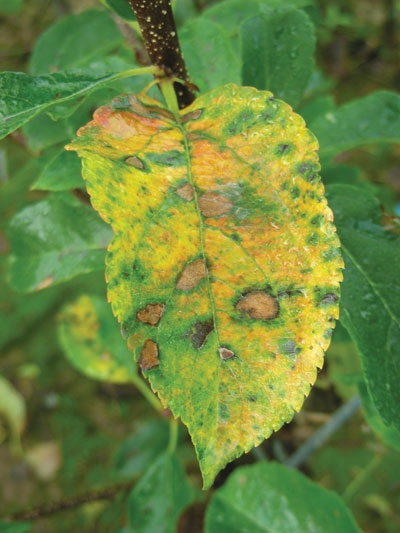 In tests performed in the Netherlands, trees treated against the Alternaria fungus remained almost free from leaf lesions and premature leaf drop. This means a solution may have been found for a problem that has resulted in significant economic losses for tree nurseries since the 1960s. With further research, PPO aims to optimize the control of Alternaria to such an extent that only a minimal application of crop protection products is required.

Premature leaf drop in the Golden Delicious apple variety is a global issue that received a great deal of attention in the Netherlands in the 1960s and 1970s. It often (but not always) goes hand in hand with leaf lesions, which means the leaves of seemingly healthy trees suddenly present brown necrotic blotches and yellowing of leaves.

The lesions and yellowing become visible between mid-July and mid-August, and are most common on older leaves. While the damage caused by leaf drop is manageable for apple growers, in tree nurseries the problem can cause a considerable loss of quality of the produced trees.

Previous research into leaf drop has failed to find a solution. Scientists have sought ways to tackle the issue over the decades without success. Research by the diagnostic centre of PPO in Lisse (NL) from 2009 to 2011 showed that the leaf lesions are caused by Alternaria. The new studies performed by PPO this season show that spraying against the pathogen works very well against premature leaf drop.

The trees in the tests treated with the fungicide against Alternaria remained almost free from leaf lesions and premature leaf drop, while the untreated trees still had lesions and experienced the usual substantial leaf drop (greater than 80 per cent).

The results represent a breakthrough in the research into the approach towards leaf drop in Golden Delicious. Further research should show the actual cause of the leaf drop, as it appears that Alternaria is only an indirect cause. It is likely that Alternaria affects the hormone regulation in the trees, which eventually leads to yellowing and premature leaf drop.

The research was financed by the Dutch Product Board for Horticulture (PT).