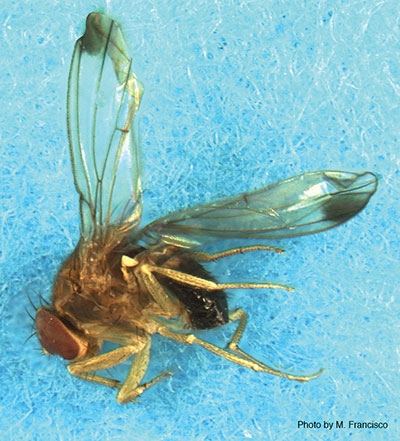 A male Spotted Wing Drosophila fly. Note the dark spots near the tips of the wings. M. Francisco

The Wild Blueberry Producers Association of Nova Scotia were recently informed there are still many unanswered questions about spotted wing Droisophila.

“This is the problem with this pest; it reproduces faster as the temperature warms up.”

He added that SWD lays eggs in all soft fruit and is particularly attracted to ripening berries.

“In Nova Scotia, we are not seeing emergence of the fly until the end of July in the last couple of years,” he said.

As for a control strategy for this Drosophila species, Burgess advised wild blueberry growers to pick their fruit early, “and pick your best fields first.”

SWD larvae populations build rapidly in August, with a harvest in September being at the greatest risk of SWD larvae infestation, he added.

When monitoring for SWD, look for the males, he continued, with monitoring traps placed in wild blueberry fields by mid-July. Monitoring is important and the traps should first be placed in the tree line beside fields as SWD flies like the shade. Traps in the fields should be placed at 20 metre intervals.

“It works as well as any current bait.”

Apple cider vinegar can be combined with red wine and unrefined sugar in a trap after the fruit is harvested as the flies will be drawn to the trap since there is nothing else to feed on, Burgess said.

“If the field is two weeks away from being harvested, you likely will need a pest control application, or if it is the 15th of August and you will not be harvesting until September, you probably need a control,” he advised. “But if you will be picking within a week, you can probably omit an application.”

As for insecticides registered for SWD, Burgess said there is a new product registered for spotted wing Drosophila – Exirel from Dupont. However, he added, “there are MRL restrictions on it in the Japanese and EU markets.”

Exirel has a maximum of four applications during the growing season, Burgess noted, and it is not yet fully registered – it can only be used as an emergency application.

Delegate and Malathion can also be used against SWD with a maximum of three applications during the season, he said, adding that Ripcord is also registered but should not be applied during hot weather “as it will burn the fruit.”

Assail will work well on blueberry maggot, Burgess remarked, but “it is not spectacular on spotted wing Drosophila.”

Entrust is also registered as an organic product, he added.

Spotted wing Drosophila, “will not be a one and done treatment,” said Burgess. “For control, you need to look at seven day intervals until harvest.”

SWD spreads from field to field and from fruit crop to fruit crop but wild blueberry fields are generally isolated at some distance from other berry crops, Burgess stated.

This past cold winter, which resulted in a lot of snow, will most likely protect and insulate the pest, he said, but a cold spring will delay the pest’s emergence.

“Across North America, we are seeing larvae in the fruit before we catch it in the traps,” he said.

The challenge for most growers is distinguishing between the blueberry maggot and the SWD larvae.

“Take a sample from firm berries,” Burgess said. “If a larvae is there, it is spotted wing Drosophila.”