Stopping plant-eating voles can be a challenge, but research may put blueberry farmers ahead of the game. 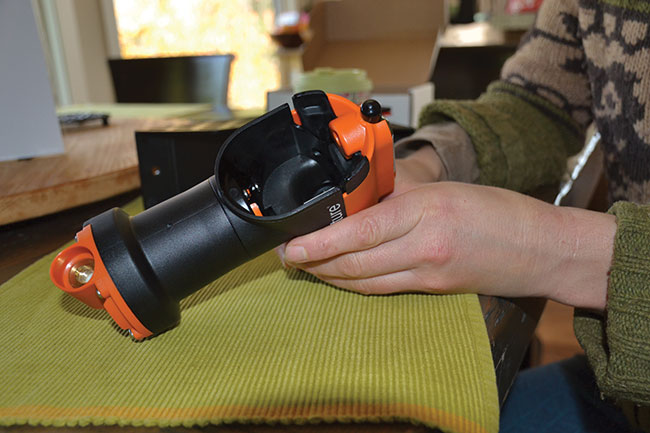 With the right bait, the trap will provide a “set it and forget it” functionality. Photos courtesy of Ronda Payne.

There’s no debate that rodents are generally seen as a farming nuisance. With well over 100 different species around the world and a vegetation-loving appetite, voles are among the worst rodents to have in a fruit-growing field or orchard. Trees, shrubs and bushes are easy targets for these voracious eaters and blueberry growers have lost many plants to the animal’s desire for tasty young roots and girdling practices.

Sofi Hindmarch, a project coordinator with the Fraser Valley Conservancy, is working with B.C.’s blueberry growers to find a poison-free method to control the Townsend’s vole, a rodent pest common to the Pacific Northwest. As a raptor and owl researcher for many years, getting into rodents may seem like an odd project for Hindmarch, but she’s seen the damage caused to birds of prey from ingesting second-hand rodenticides. It was a natural progression to move to rodents and she’d like to help farmers find alternatives to dangerous poisons to control pesky voles.

“It seems like overall, farmers are quite receptive to this,” she notes about the project. “All our residue data is showing the rodenticide in raptors is 100 per cent. Not only one type, but two or more.” This means that every raptor that has been studied had at least two types of rodenticides (or more) in their system. These figures become alarming when farmers consider that raptors are an excellent rodent control method.

Jack Bates, chair of the B.C. Blueberry Council, supports Hindmarch’s project. Her project involves a baited trap with a CO2 gas-fired bolt to kill the voles immediately. The trap also has the added plus of not needing to be reset after each shot. The council contributed funds from its science and technology research grant to help trap testing get underway.

Bates states that using rodenticides as a control now results in an animal eating a dead rat or mouse and getting sick and dying because of it. “[The trap is] probably just a better way for the birds.” 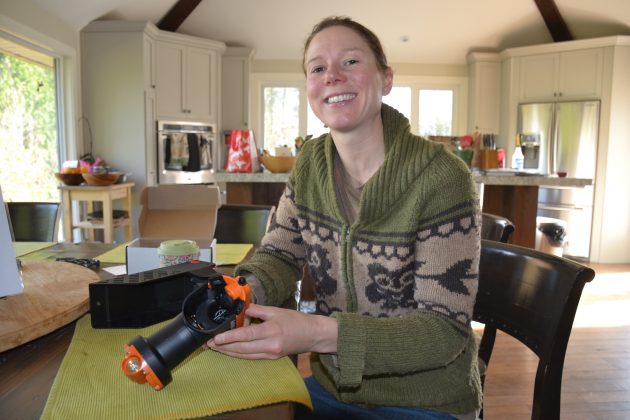 Hindmarch is working to create a lasting attractant for the trap which they source from Goodnature, a rodent trap company based in New Zealand.

Part of the issue that may lead to overuse of rodenticides could be a lack of accurate identification of rodents, which is understandable given the similarities between mice, voles, shrews and moles. Hindmarch’s main target, the Townsend’s vole, is larger than most other voles and blueberry field rodents. It typically weighs 45 to 90 grams (g) and is 11 to 14 centimetres (cm) in body length. It is covered with chocolate brown fur that hides the ears and has a relatively short tail less than half its body length.

As Hindmarch explains, knowing the type of rodent in the field makes all the difference. Deer mice don’t cause any harm to blueberry plants. Mole and shrew damage is minimal, if at all, because any harm caused is only a result of moles and shrews disrupting roots while tunnelling. Only voles feed on woody shrubs and tree seedlings when their preferred grasses and sedges aren’t available in the late fall and throughout winter. “We want to help with landscape management. So [understanding] what is vole damage [and] what isn’t,” she says, explaining part of the identification process.

“We want to help with landscape management. So [understanding] what is vole damage [and] what isn’t,” she says, explaining part of the identification process.

Unfortunately, when there is a lack of understanding, spotting any rodents can lead to frustration and an overuse of rodenticide which is harmful for raptors and other wildlife that prey on them. Knowing that only voles cause damage to blueberry fields allows farmers to acquire the knowledge to determine if the rodents they have are voles. Then, farmers can consider targeted solutions after matching their symptoms. 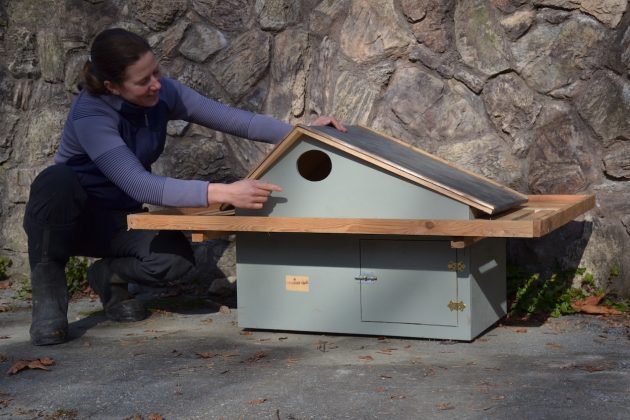 Sofi Hindmarch is working with B.C.’s blueberry growers to find a poison-free method to control the Townsend’s vole.

Voles can also be recognized by their travelling habits. They create holes of about five centimetres in diameter and there are no dirt piles over these holes which lead to tunnels often visible on the surface of the ground as runway depressions. Voles will stay close to their food source so they will burrow along blueberry bush rows in fall and winter.

Other smaller voles like the meadow vole and the pine vole are seen in eastern maritime areas and are equally damaging to blueberry fields as the Townsend’s vole is in the west. It is unknown yet if Hindmarch’s project will be effective against these other types of voles. She has been working with Elana Varner, a PhD student in rodent ecology with Simon Fraser University, to develop the most effective bait for Townsend’s voles. Together with a trap from Goodnature, an innovative rodent trap company in New Zealand, the pair are working to create a lasting attractant for the trap.

“Voles, like many other rodents, have an extremely evolved olfactory communication system; meaning they communicate with others of their species through scent,” Varner says. “All rodents are species-specific when it comes to their communication pathways. Therefore, one great potential way to attract voles is by tapping into their natural communication pathway, possibly by using soiled bedding that captive voles have been housed on, to use as a lure in our traps. We are also aiming to test more conventional food attractants to see if these are effective.”

This had led to looking at a combination of pheromone and food (apples, oats and peanut butter) baits for the mesh pouch voles can smell in the trap, but can’t access. It must be specially formulated so that it lasts a significant period of time without turning moldy. Hindmarch is currently setting up trials in blueberry fields with cameras to observe the effectiveness of the different types of bait.

This had led to looking at a combination of pheromone and food (apples, oats and peanut butter) baits for the mesh pouch voles can smell in the trap, but can’t access. It must be specially formulated so that it lasts a significant period of time without turning moldy.

“For this eco-friendly alternative [to rodenticide] to be competitive and make this pest-control method feasible, it needs to be coupled with a multiple-kill trap,” Varner says. “A multiple kill trap will function similarly [to rodenticides] in that you ‘set it and forget it’ and it will take care of the pest from there, not needing to be reset like a conventional trap every time.”

With the right bait, the Goodnature trap will provide this ‘set it and forget it’ functionality. Bates sees the project as a positive because predators will still eat the dead voles but without the consequences of second-hand poisoning.

Bates sees the project as a positive because predators will still eat the dead voles but without the consequences of second-hand poisoning.

“You can clean them up in no time,” he says. “Either coyotes are going to eat them or something’s going to take them. There’s no poison, there’s nothing. If it works, it’s just probably a better way of doing it. It works in warehouses for rats and mice, so why wouldn’t it work in the field?”

Hindmarch sees the trap working well as part of a full-field solution that includes creating inviting habitat for raptors and owls as well. A nesting pair of barn owls and their chicks can eat more than 1,000 rodents a year including voles. Thus, installing owl boxes in tandem with the Goodnature trap is likely to reduce a vole population rather dramatically in a short period of time. Because the traps leave the vole carcasses behind, owls and other raptors, as well as other natural scavengers, will still have access to food and will continue to maintain their home and hunt live rodents as well. The trap can be installed against a tree or building with minimal space.

“Just how bad rodenticides are for the environment is really just becoming understood,” Varner says. “One survey of mammals in California showed that 70 per cent of mammals had poison in their systems.” Bates is all for eliminating rodenticides and is excited to put the traps in place on his fields.