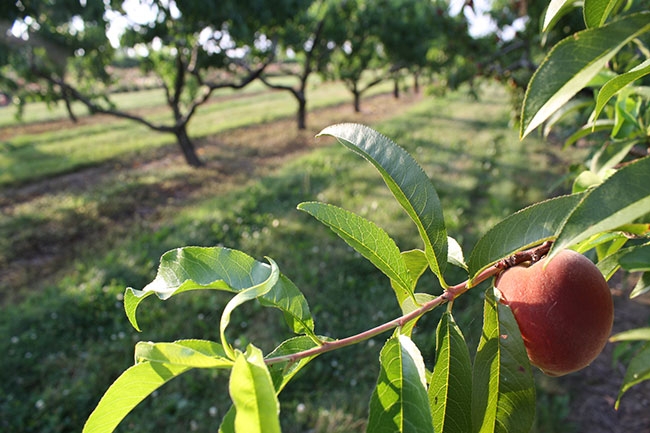 Researchers at the Fort Valley State University have been working to develop a robotic solution for monitoring high-density peach orchards.

Researchers at the Fort Valley State University have been working to develop a robotic solution for monitoring and spraying peach orchards.

“Plants cannot walk to their doctors or plant researchers to convey that they are sick. So, how can we solve this problem? A monitoring system is the likely solution,” says Bipul Biswas, research professor with the college of agriculture at Fort Valley State University.

Researchers originally thought using UAV (unmanned aerial vehicle) to capture images of the peach trees may be the answer. However, in order to be effective, close-up photos of individual trees are required, not the canopy of the total orchard. Unfortunately, when the UAV was run it was unable to get close enough to the trees to collect the proper images.

“We thought maybe I can buy a golf cart and drive through the orchard with a video camera. But that wasn’t possible either because this was a high-density peach orchard with intercropping. There wasn’t enough room,” Biswas says. “I then talked to the NASA scientist who developed a UAV that can count the number of apples on a tree. However, that wouldn’t work because you need to take the pictures from the same location every time so you can compare with the next picture. You can’t take them from different directions on different days,”
Biswas says.

Researchers concluded they would need to develop a robot specific to their needs. The robot would be outfitted with cameras that can follow GPS coordinates.

The AgBot is 25-inches in height, 25-inches wide and 45-inches in length. It has six wheels with four-inch clearance from the ground. With four Logitech C922x Pro Stream Webcams, the robot is capable of capturing high-resolution pictures from exactly the same position every time.

With a 12-volt battery, the robot operates six-to-eight hours when fully charged and will return automatically to a charger, when required.

Four pictures are captured of each tree, the upper and lower for each side. The sequentially arranged photos can be used to monitor the health condition of each tree for biotic or
abiotic stresses.

The robot is programmed to follow a red line throughout the orchard, pausing to take photos every time it hits a blue spot, as placed by the operator.

The AgBot can also be used to spray in the orchard for controlling weeds and pests as required. When the camera detects or ‘sees’ a tree it is triggered to spray.

“There’s a minimum of four sprays you need: Before flowering, after flowering but before the fruit comes, when the fruit comes and after harvesting. This robot can help to do that,”
Biswas says.

The Agbot is capable of carrying a few hundred pounds, can be driven automatically or manually.