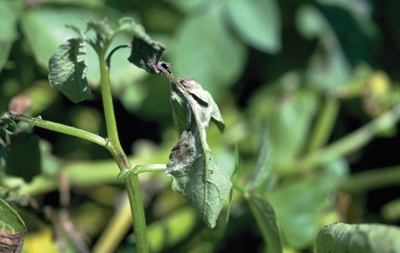 Researchers Rick Peters from Agriculture and Agri-Food Canada’s Charlottetown office, Jeff Miller of the University of Idaho, and Gefu Wang-Pruski with the Nova Scotia Agricultural College, are touting phosphorous acid as an important tool in controlling potato diseases, such as late blight and pink rot.

Phosphorous acid is not in actuality an acid, Miller noted. Rather, it is a neutral blend of phosphorous acid salts that converts to phosphite ions in the plant. The product also goes by the names Phosphite or Phosphonate and is the active ingredient in Confine, Phostrol and Rampart.

Rick Peters added that phosphorous acid does not work well with seed. While it is effective in controlling disease, the product has a negative impact on emergence, vigour and yield.

“In 2010, we noticed delayed emergence, reduced vigour and yields in plants grown from tubers harvested from plants that received five foliar applications of PA (label rate) in the field the previous year,” he reported.

Nor does phosphorous acid have any preventive effect when used as an in-furrow treatment, he added.

“It is effective though for foliar late blight and pink rot control when combined with a protectant,” he said. “[It] is superb for managing tuber rot at harvest and into storage some control of other foliar diseases.”

Wang-Pruski reported that her team’s research suggests that, to be most effective, foliar application should be started as early as four weeks after planting, with phosphorous acid being applied at five litres per 1,000 litres of water per hectare.

“Applications should be at least five times every two weeks,” she said, adding that phosphorous acid is one of the few options for late blight control.

As a post-harvest treatment, phosphorous acid is superb for killing spores on tuber surfaces, said Peters.

“In our trials, chemical treatments applied one hour after inoculation almost completely suppress disease,” he said. “It is important to note though that control was achieved before any infection occurred. Phosphorous acid won’t suppress disease if tubers are already
infected. Therefore, treatment must be applied as soon after harvest as possible.”

Miller agreed that the treatment protects healthy tubers but is not a curative. The use rate should be 12.8 fluid ounces (0.38 litres) per ton of tubers, he said, adding that the product is safe on tubers when following instructions on the label.