Features Production Research
Peanuts that do more with less water 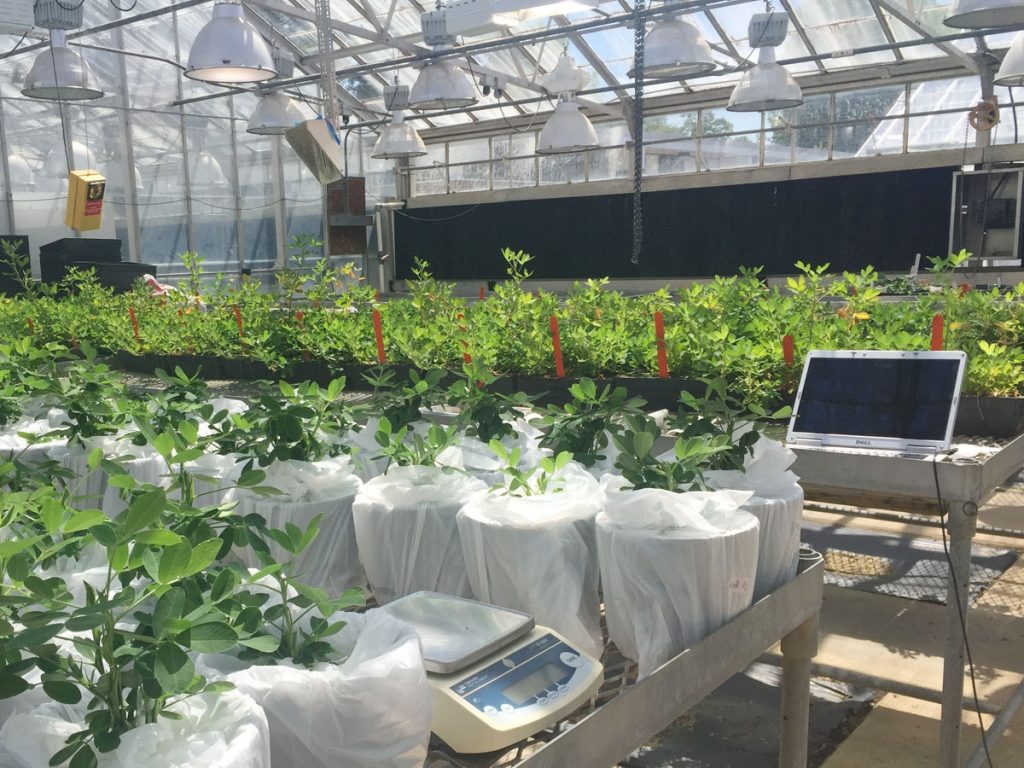 The beloved peanut usually grows in sandy soil where there might not be much moisture. But some varieties of peanut perform better in drought than others. They use less water when there isn’t much to go around, and remain productive as drought deepens. Crop scientists are trying to find the peanut varieties best at it.

Thomas Sinclair at North Carolina State University and colleagues are studying peanut varieties to find a ‘water conservation’ trait. It would help the plant maintain a high yield during a drought.

“Crop varieties that have a greater yield than others, with less water, are crucial in maintaining or increasing the profits available to growers,” he explains. “This may become especially important if, as predicted by some, climate change results in less rainfall occurring in less frequent events.”

Peanut plants conserve water by having a lower transpiration rate as the soil gets drier. As soil water becomes less available, the plants adjust how much moisture they release, or transpire. By doing this early in the soil drying cycle, the plant conserves water for later as the drought gets worse.

“Somewhat surprisingly, nearly all plants show a decrease in transpiration with soil drying,” Sinclair says. “By decreasing water loss earlier in the soil drying cycle, water is conserved. This means there is more water available to sustain the crop as the drought goes on.”

The researchers set out to find this water conservation trait through three sets of experiments. First, the team performed experiments in greenhouses to find plants with the trait. In order to confirm the trait would work in the field, researchers also observed the plants there. If there was a delay in leaf wilting during a drought, that was good news: water conservation was happening within the plant.

Finally, they let the plants grow and produce peanuts. They measured the yield to see if the plants were actually able to make more peanuts.

“This research was a three-phase study to identify a peanut line that had the potential for increased yields under drought conditions,” Sinclair says. “In fact, one line with a water conservation trait was found to have a greater yield than the current commercial line under water-limited conditions.”

The researchers are preparing the paperwork for this more efficient line to be on the commercial market. It will be recommended for soils and environments where drought is fairly common. But ultimately growers will decide if this drought-tolerant variety fits their individual farming operations, Sinclair explains.

Sinclair says the next step in this research is exploring another trait, nitrogen fixation. Peanut plants use soil microbes to access vital nitrogen from the atmosphere. This process can be especially sensitive to soil drying. Past studies showed most U.S. peanut varieties start losing their ability to do this even before drought develops. Finding types of peanut that are able to sustain this activity, combined with the water conversation trait, would be a good combination for increasing peanut yield, Sinclair adds.

“I am a crop physiologist who is interested in sorting out how plants grow and develop in the field to generate yield,” he says. “It has been a career challenge to develop a view of how crops use water and explore how all crops could more effectively use the available water.”