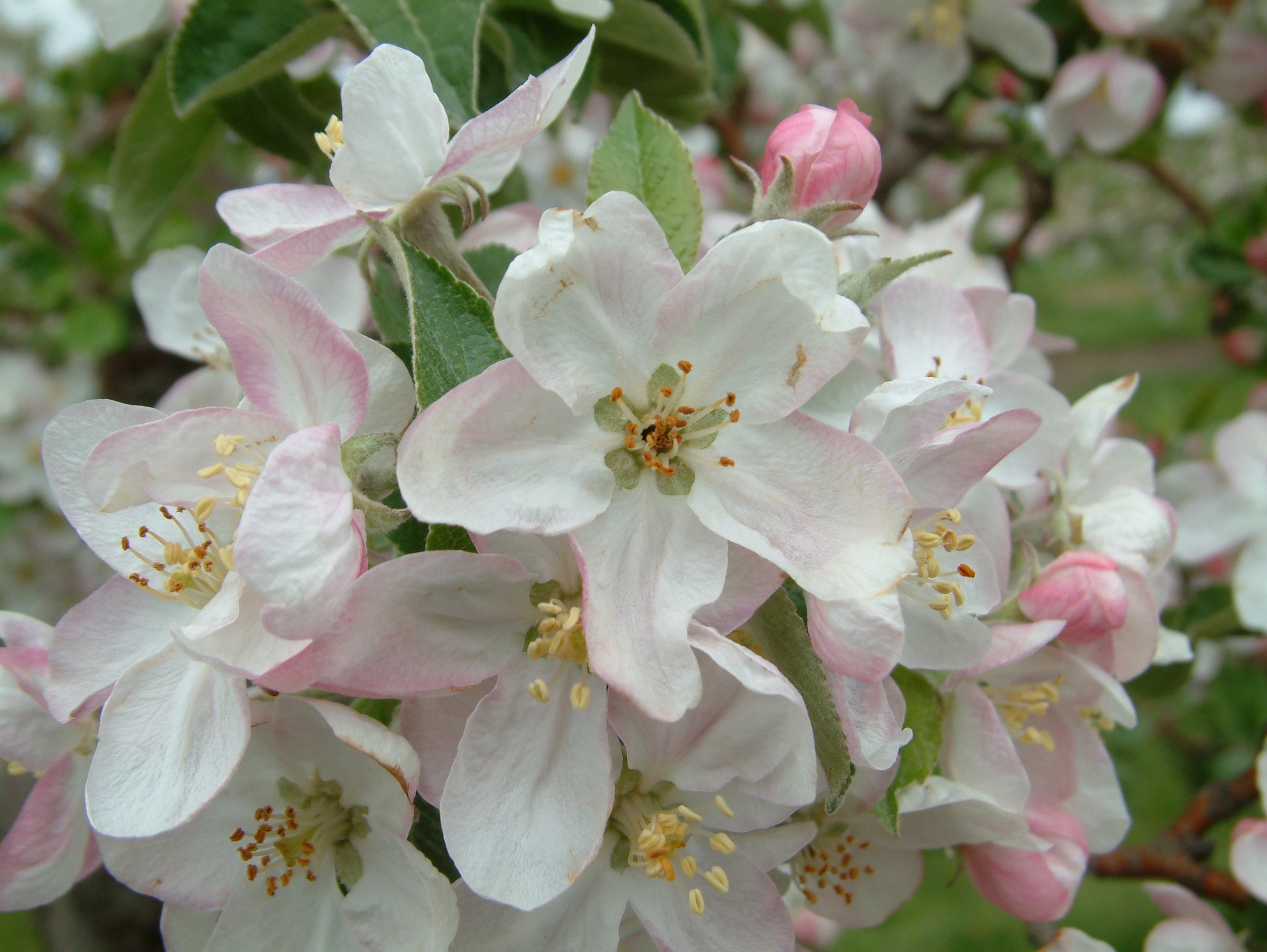 The post-application risk of carbaryl to workers and growers alike has recently been re-evaluated by Health Canada’s Pest Management Regulatory Agency (PMRA) and some cautionary changes have been made for both low and high-density apple trellis systems.

“Rates are not reduced,” assured Amanda Green, tree fruit specialist with the Ontario Ministry of Agriculture, Food and Rural Affairs (OMAFRA), and apple session moderator at the Ontario Fruit and Vegetable Growers’ Convention (OFVC). “It’s the number of applications per year and total amount applied per year that is reduced.”

“This has been quite a challenge,” Green said, adding that three panelists – Charles Stevens of Wilmot Orchards; Zac Farmer of Watson Farms Ltd. and Sean Bartlett with N.M. Bartlett Inc. – had been invited to speak about their thinning experiences and how they plan to manage crop load in the future.

Stevens opened the panel discussion with a question for the audience.

“My wife says it’s like I have PMS for two weeks every year,” Stevens said. “Thinning is one of the most stressful jobs on the farm and makes us moody, grumpy and stressed out.”

“I want to touch on three different apples: Honeycrisp, Gala and Ambrosia. Last year, we thinned Honeycrisp in a totally different way. We found out from Michigan, where they did some research, that two doses of NAA [napthaleneacetic acid] by itself at 10 parts per million – one at full bloom and one at petal fall – came out with perfect thinning jobs after performing two trials,” Stevens said.

“So, we applied 10 parts per million at full bloom and then it got hot and we got a bit scared. We backed off to 7.5 parts per million at petal fall. Fear is the detriment of thinning. At the end of the day, all fruit buds had very few seconds, or side blooms. If I had to do it over again, I would have gone in again at 10 to 12 mm fruit size with a full dose of Sevin [carbaryl] and 10 parts per million of NAA, resulting in me chemically thinning three times. At the end of the day, Sevin was not used for thinning Honeycrisp last year,” he said.

“We used ATS [ammonium thiosulphate] on Honeycrisp last year instead of Sevin as an alternative and had little response. It’s very sensitive to environmental conditions and thus was not an effective alternative,” said Stevens.

“The Galas were under thinned again last year. Normally, we do a full dose of Sevin on everything at petal fall but we missed that window. There was too much going on and it got hot, so we didn’t get it on. And, because of the restrictions, we’re not going to do that down the road,” he said.

“Sevin is the most important thinning chemistry at this time as the balance of the thinning chemistries perform better when mixed with Sevin. For Galas, we put on a full dose of Sevin, 115 parts per million of 6-BA at 8 to 10 mm fruit size, and we felt we did a good job. But, at the end of the day, we still left too many apples on the trees,” said Stevens.

“We will use 6-BA for size enhancement. It’s not strong as a chemical thinner so, without Sevin, it does not do a good job on anything,” he said.

“In all my chemical thinning days, Ambrosia is the only crop that I dropped on the ground one year because it was temperature and climate related. I used the same chemistry as the years before and it was cloudy for a couple of days. I sprayed and the next day it was 28 degrees [Celsius]. We dropped all our Ambrosia on the ground. That was probably the only over thinning of apples I have ever done,” said Stevens.

“Last year, we did a perfect job on Ambrosia. I feel that the size of the apple at around at least 11 to 12 mm bud size is the time to thin. From my experience, anything earlier and you’ll over thin Ambrosia. We use a full dose of Sevin and about 60 parts per million of 6-BA. So, that’s the story on Ambrosia. It’s a little simpler apple to thin and makes for a beautiful crop,” he said.

“In the world of chemistries that are coming along, there are two acids that are in the works and hopefully will be registered for use here in Canada. One is called ACC [1-aminocyclopropane carboxylic acid] and the other is Brevis,” he said. “Both ACC and Brevis are stand alone products that don’t require the use of Sevin and also have a wider range of use, meaning that they can be used on a larger apple.”

“I’m going to touch on the same three apples as Charles: Honeycrisp, Gala and Ambrosia. We were in the same boat as him. In the past, we took the same approach with a Sevin (application) at petal fall early,” said Farmer.

“We chose not to do that last year to jump-start our learning curve on living without Sevin, using it just once a season.”

On younger Honeycrisp trees, Farmer applied 10 parts per million of NAA, thinning at the 100-gallon rate.

“It seemed to work nicely with two applications,” he said. “We live just 10 minutes from Charles and we got the same heat but we didn’t back off on the second application except for two blocks at 5 parts instead of 10 parts per million NAA. We wish we hadn’t. We did less hand thinning last year, and I still wasn’t happy with the amount we took off.”

“We did some trials with ATS, our second year with it, and we’re running two per cent oil. At full bloom, you’re aiming for the kings. You have to watch the bees to make sure they’re done pollinating or you’ll burn a lot more off than you wanted. We did that on a block of Gala. Not everything got burned but there was a valley in the field where pretty much everything there got smoked due to lack of pollination. It was all sprayed at the same time so it’s very weather and time sensitive,” said Farmer.

They also did some trials with lime-sulphur at 1.2 per cent with two per cent oil.

“We did it again this year and we’re happy with it. It’s a lot more finicky than ATS so we’re going to do more ATS this year,” he said.

“All that stuff we try to do early, then we come back in with a litre of Sevin or two litres of MaxCel, plus one or two per cent oil. If we’re limited on the Sevin, we’re going to have to do more with the NAA and those new thinners once they come along,” said Farmer.

“On Ambrosia, we’ve never used a lot of Sevin. We do thin a little bit earlier than Charles but usually one litre of MaxCel is enough, or a half litre of Sevin on the really heavy stuff. They seem to respond really well to that. I think Ambrosia is very manageable with one application of Sevin, it’s Gala that’s a really hard one.”

Last year, Watson Farms Ltd. had a drought so thinned hard on the Gala. The variety never did size and part of that was due to lack of moisture.

“On older trees, we did some side by side trials with Gala and Honeycrisp with two per cent ATS versus 10 parts NAA at full bloom, and there was a noticeable difference between the two.”

“If you hit that ATS on the nose, it thins as fast as you can walk by the tree. We’re very happy with that. I’m not saying that’s what we’ll rely on as it’s very weather sensitive but we’ll keep working on it and fine tuning it so we can knock those fruit off at early bloom,” concluded Farmer.

“I just want to touch on some of the different things guys across the province are doing for apple thinning,” said Bartlett.

“Ultimately we are doing more and more to get down to the promised land for fruit per tree to create the best returns at the end of the day. With this, we have started to follow many precision thinning tools to do this, including pruning models, carbohydrate model, and pollen growth tube model, to name a few. With these models in mind, we have started thinning at different timings and more often lending itself to the nibble thinning approach,” he said.

“We’re also having to re-invent old chemistry using bloom thinners, like lime sulphur and oil, and ATS and NAA. Of course, we’re looking for some new chemistries down the road, like Brevis and ACC. We have also started reaching out to other non-chemical alternatives, such as mechanical thinning,” said Bartlett.

“Mechanical thinning is popular in Europe where over 600 of the Darwin Blossom Thinners are in use in pome and stone fruit orchards. These are popular in peaches in North America but slow to take hold in apples, perhaps because there are some great thinning products available there,” he said.

“A three-year study by Cornell University found that it was possible to replace a conventional thinning program with mechanical thinning. In the study, they compared a comprehensive thinning program with NAA, 6BA and Sevin to mechanically thinning with a follow up of 6BA. In the end, they were able to perform comparably with the standard on Honeycrisp and Gala,” said Bartlett.

“The important factors in this were the correct spindle speed, depth, and speed of the tractor. It took them a few attempts to perfect the thinning response. It will be different for most blocks as canopies are never the same,” he said.

“What we have learned is more strings are better, and the deeper into the canopy they can get is also better. Hedged rows are optimal and 6BA has a synergistic affect with the use of mechanical thinners. Thus far, the work has not shown to cause fire blight but, if in doubt or a troubled block, I would recommend following up with a strep.”

“Do your own trials and keep good records. Research is proving that mechanical blossom thinning is a viable option,” he concluded.