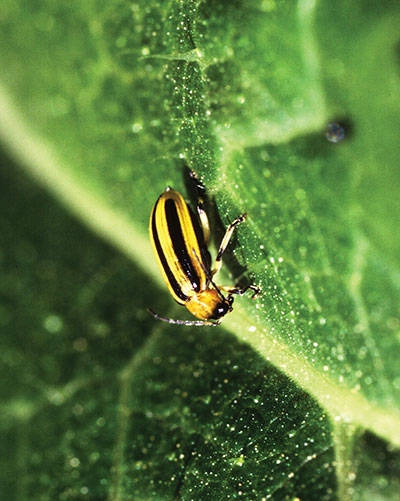 The striped cucumber beetle, a predator of cucurbits.

Increases in ground-level ozone, especially in rural areas, may interfere not only with predator insects finding host plants, but also with pollinators finding flowers, according to researchers from Penn State and the University of Virginia.

“Ozone pollution has great potential to perniciously alter key interactions between plants and animals,” the researchers said in a recent issue of Environmental Research Letters.

The insect tested was the striped cucumber beetle, a predator of cucurbits. The insects dine on the plants from the moment they emerge from the ground and when fruit forms, they eat that as well.

Jose D. Fuentes, professor of meteorology, and his colleagues tested the beetles in an enclosed Y-tube apparatus so that the insect could choose which branch to take. Researchers collected the insects from pumpkin and squash plants. They tested the insects using buffalo gourd plants, a naturally growing wild gourd that likes semiarid areas.

Separate air streams flowed into the two branches of the Y-tube.

While one might think that higher ozone levels in the lower atmosphere would improve crops because predator insects would be unable to find their hosts, the additional ozone would also interfere with mutualistic insect plant
responses such as pollination. ❦