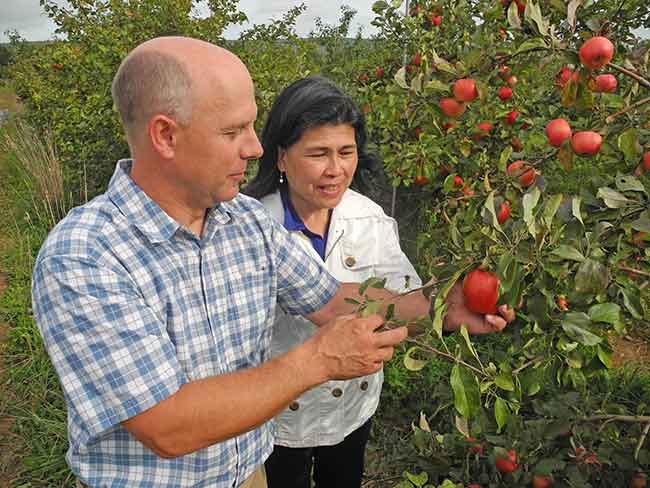 For organic farmers trying to grow the popular Honeycrisp apple, what happens in the trees depends on what happens on the ground between the tree rows, says Agriculture and Agri-Food Canada (AAFC) organic specialist Julia Reekie.

“Those several metres between the tree lines need to be part of the production system,” says Reekie. She is working with Trent University researcher Mehdi Sharifi and Andy Hammermeister, the director of the Organic Agriculture Centre of Canada, on the right mix of perennial grasses and legumes to turn these soil strips into a nutrient storage container for the demanding apple. Working at a Woodville, N.S., organic Honeycrisp orchard, the team adopted a modified orchard floor cover crop system called the “Swiss Sandwich System,” developed in Switzerland. In the system, a half-metre-wide band of natural vegetation is left undisturbed in the tree trunk line to create a natural habitat for beneficial insects, particularly pollinators. On each side of the trunk line, another half-metre-wide strip is shallow tilled to maintain bare ground, which ensures a competition-free zone for the tree roots. Finally, in the lane between these bare strips, researchers grow a cover crop mix of Timothy grass, alfalfa, alsike clover and red clover in different combinations. Two or three times a year, depending on the plot trial, the mix is mowed and the clippings tilled into the bare strips.

“Because they don’t use synthetic fertilizers, one of the biggest challenges facing organic apple farmers is maintaining high levels of nitrogen needed by their trees,” says Reekie, who works at AAFC’s Kentville Research and Development Centre. “This is a way to get that nitrogen from a natural source.”

While the multi-year project is still in the early stages, Reekie says “we could see the trees were looking better, with greener leaves indicating higher chlorophyll content.” Because the vegetative matter releases nutrients, including nitrogen, slowly as it breaks down, Reekie says the team is considering a till late into the season to provide a burst of nitrogen early in the next growing season.

“It’s like setting your coffee pot to start the next morning so you can wake up to a hot cup of coffee,” Reekie says.

Brian Boates, who provided an acre of his orchard for this project, says the research will help organic growers tap into a lucrative market.

“I think there’s enormous potential for organic Honeycrisps in Nova Scotia,” says Boates, president of the Atlantic Canada Organic Regional Network. “With the growing public interest in organic food and the environment, the demand will continue to increase.”

The organic market in Canada is growing and is now the fourth largest in the world with organic and transitional farms representing roughly two per cent of agriculture in the country. Working out the kinks in the production of the Honeycrisp is nothing new for AAFC’s Kentville Research and Development Centre. Twenty years ago, the centre planted the first Honeycrisp tree in the province.

Researchers had to work out management techniques for handling the apple’s biennial bearing problem (too many blossoms one year, not enough the next) plus the right conditions for storage.

The apple has since gone on to a premium-priced consumer favorite that gives growers a higher return.

The latest research on organic production of the apple is one of the projects under a federal government and industry collaboration called Organic Cluster 2 being led by the Organic Federation of Canada. It was launched last year with a $7.7 million investment from Agriculture and Agri-Food Canada.

Avril Vollenhoven is the regional communications advisor for Agriculture and Agri-Food Canada, based in Halifax, N.S.