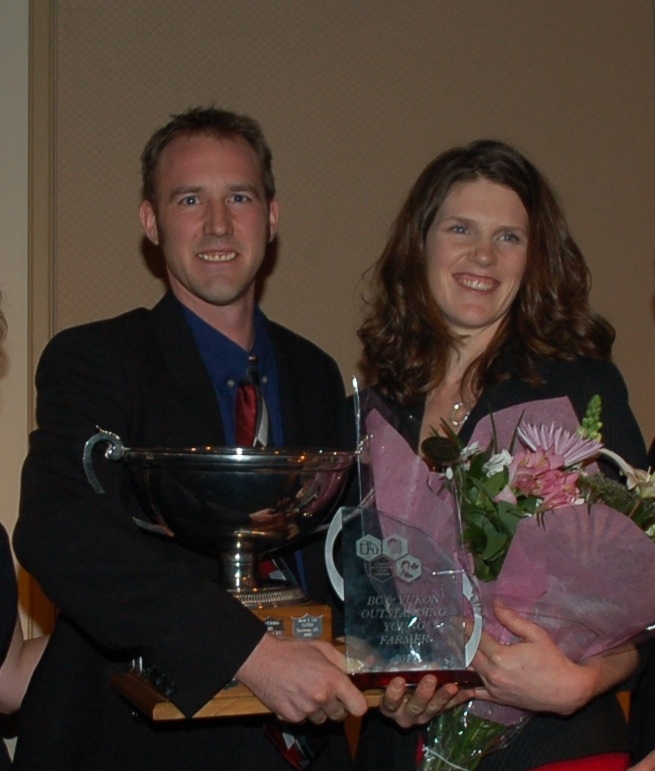 Annamarie and Kevin Klippenstein have been named the B.C. and Yukon Outstanding Young Farmers of 2011.

Annamarie and Kevin Klippenstein have been named the B.C. and Yukon Outstanding Young Farmers of 2011.

The Klippensteins of Klippers Organic Acres in Cawston received the prestigious award from B.C. Minister of Agriculture Ben Stewart in front of almost 500 people during the recent B.C. Agriculture Gala in Abbotsford.

Since acquiring their first five acres in November 2000, the Klippensteins have steadily expanded their organic orchard and market garden and now farm close to 40 acres. Although their intent was to sell everything they produced at Vancouver-area farmers markets, they have now diversified their operation to include value-added fruit products and summer and winter Community Supported Agriculture box programs, allowing them to have year-round income. This past year, they also began a gift certificate program that allows consumers to purchase gift certificates at the beginning of the year and exchange them for produce through the season.

A finalist for the OYF award in 2005, 2006 and 2007, Klippers Organic Acres was the first organic farm to have an Environmental Farm Plan and the first to be certified “Salmon Safe.” Kevin is also chair of the new Organic Farming Institute of B.C. and runs a farm apprenticeship program, providing accommodation and training for up to 10 apprentices per year. The operation also employs up to eight WWOOF’ers (World Wide Opportunities on Organic Farms) at any given time.

“We feel there’s a need for young farmers and we have a successful model to show them,” Kevin explains.

The Klippensteins harvest more than just vegetables and tree fruits. In 2009, they also began harvesting the sun, installing solar panels to power their drying facility and apprentice accommodations.

Runners-up for the 2011 award were Ed and Laura Maljaars of Chilliwack.

To be eligible for the Outstanding Young Farmer award, farmers must be between 19 and 40 years of age, derive at least two-thirds of their income from farming and demonstrate progress in their agriculture careers. Nominees are judged on conservation practices, production history, financial and management practices, and community contributions.

As B.C.-Yukon OYF winners, the Klippensteins will travel to Regina this fall where they will compete against six other regional winners for the Canadian OYF award.