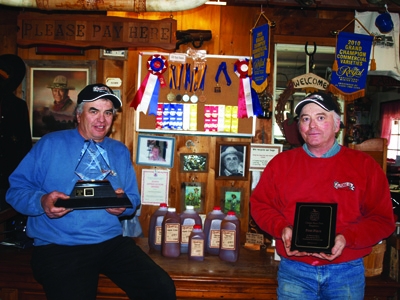 Jim (left) and Ray Ferri with the Ontario apple cider trophy they won during the recent cider contest at the Ontario Fruit & Vegetable Convention plus some of the other hardware Al Ferri & Sons Country Apple Store cider has won over the years. Contributed

The competition at the Ontario apple cider contest remains fierce with strong competitors perfecting the right blend to please the palates of judges and consumers alike. This year’s competition saw a surprise upset by last year’s underdog taking first place this year at the Ontario Fruit and Vegetable Conference, Niagara Falls, Ont.

“Last year we placed third and, while it was nice to get an award, I figured we could do better. There’s always room for improvement,” said Ray Ferri, of Al Ferri & Sons Country Apple Store on Heritage Road in Brampton, Ont.

The store was named for their father, Aldo, and the sons Ray and Jim are the third generation to operate the farm their parents bought in 1945.

“I don’t know who to begin to thank,” he said. We couldn’t do what we do without our family, he added.

“I’m very pleased with this year’s contest, and we intend to keep running it, with the Ontario Apple Growers sponsoring it,” said Leslie Huffman, apple specialist for the Ontario Ministry of Agriculture, Food and Rural Affairs (OMAFRA).

“My goal in organizing the competition is to highlight the great product that our cider makers produce, and to encourage continual improvement in cider making,” she said.

“We had nine entries this year, and although I was not a judge, I tasted them all, and think they had improved from last year … it’s the balance and taste that make a winning cider. I know the top ciders were very close, and I’m glad I wasn’t a judge,” she added.

Balance and taste are paramount to Ray and Jim.

“The cider submitted this year (to the contest) was similar to last year, an off-the-shelf jug. I adjust every batch to taste and I always go for the same taste. It is difficult to say there’s any difference other than the growing conditions for each year, although the age of the apples does have an effect,” said Ray.

“The cider is always made for our customers. Consistency is what drives sales. Winning a contest like this, well, that is icing on the cake,” he added.

“I’d like to mention the feedback I get from people when I tell them about the cider competition,” added Huffman.

“Many mention how they really like the cider, and think the competition is a good idea, and some even volunteer to judge,” she said.

“I was pleased to see the positive comments on Twitter around the competition this year (at the OFVC), as several judges and participants were talking about the competition and cider in general,” she added.

Long before this apple cider competition began, Ray and Jim remember well their father buying the farm’s first cider press in 1975 when apple prices were depressed.

To help feed the young family, their father started pressing apples into some really good cider that the customers enjoyed and remembered. Following in Aldo’s footsteps, his sons carry on the family tradition today and produce some really great apple cider, the sort of cider that was recently awarded as the best in Ontario.

“We feel proud about this recognition, though this is really a win for my mother and my father who started this business and who taught us how to do it right,” says Ray.

“Their pictures hang in our store to remind us who started this business and where we came from,” he concluded.