The 2018 Grape King, Chris Van de Laar spent 14 years in the corporate world before returning home to take over the family grape and tender fruit farm. 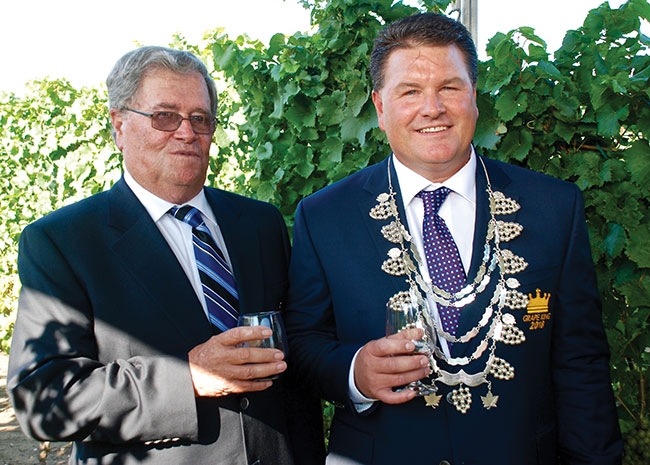 In over 63 years there have been three father-son grape kings and this was one of those years. Chris Van de Laar’s father Peter was grape king in 1985.

For 14 years Chris Van de Laar has spent his time climbing the corporate ladder and developing a love affair with banking and finance. While an account manager with Scotiabank at rural Ontario branches in Listowel and Goderich, he handled a number of agriculture accounts, until moving into faster-paced commercial banking, and finally, he was offered a vice-president position.

That plum job offer came just minutes after a telephone call from his father who offered to sell him the family grape and tender fruit farm in Niagara-on-the-Lake, Van de Laar Vineyards.

“Two dream job offers dropped in my lap in one day,” he says. That was in February, 2005, in the middle of a what would be a severely cold winter that caused significant winter kill in addition to winter kill two years earlier. His father Peter, then 62, was prepared to put the second generation farm up for sale if his only son was set on a banking career.

Chris, who was then just 37, said he deliberated for two weeks. Then he got a telephone call from a bank executive who influenced his decision. He, too, had faced the same dilemma and left the family farm to a younger brother who was, “making five times less money, but was 10 times happier.”

And with that Chris turned down the corporate promotion and went back to the family farm.

“(It) was a no-lose opportunity: If at any time I wanted to come back to the bank, the door was open to a similar position. For me, the business side (of farming) is just as important as the production side,” Chris says about navigating the rocky financial shoals of growing a crop that’s highly sensitive to the weather.

He acknowledged that he’s not mechanically inclined, but any shortcomings he has are offset by his father who is prepared to jump on the tractor and run errands at any time. As well, there are six offshore workers from Jamaica who have been part of the operation for years, and a 14-year-old son Nathan who, in banker’s lingo, he calls his “succession plan”.

Chris and his wife Laura — high school sweethearts — have an older daughter Erica who is studying to become a lawyer. When she was seven she was diagnosed with Leigh’s Disease, a neuromuscular disorder that has affected her vision. They lost a three-year-old son, Andrew, to the same rare genetic disease.

Now, Chris is looking back on 14 harvest years — the same number of years as he was a banker. And, as he prepares to enter his fifteenth year operating the farm, Chris will be taking on a new role after being named the 2018 Grape King at the Niagara Wine Festival this past fall.

Every fall since 1956 Ontario’s grape growers have selected one of their own to be crowned Grape King. The king is selected by a three-judge panel from academia. They choose from a handful of nominees made by fellow growers who belong to the 500-member Grape Growers of Ontario.

The growers who allow their names to stand for judging have their vineyards evaluated on a number of criteria ranging from the obvious — grape varieties that are hard to grow, weed, soil, canopy, and disease management, and overall quality — to less obvious, but just as important categories – outreach in the industry and innovation.

Over 63 years there have been three father-son Grape Kings and this was one of those years. Chris Van de Laar’s father Peter was Grape King in 1985. Chris, who was 17 years old and in high school then, said he was “slightly embarrassed” by the over-the-top crown and purple robe his father wore at official functions.

The official attire now is a tailored sports jacket and a chain of office that has the names of all previous Grape Kings. It was designed by former Grape King, Howard Staff (1996).

The Grape King attends numerous functions during the Niagara Wine Festival in the fall. One of the first is with his family on the City of St. Catharines float that anchors the 90-minute long festival parade.

Chris had declined previous Grape King nominations because of the time it would take him off the farm to be the grape and wine industry’s ambassador. But this year Laura, a teacher who also runs the roadside fruit market on the tourist-laden Niagara Parkway, is taking a year off teaching to free up some time.

In over 63 years there have been three father-son grape kings and this was one of those years. Chris Van de Laar’s father Peter was grape king in 1985.

The new roles will mean going to numerous events in the province on behalf of the Grape Growers of Ontario. There’s also a trip to the Okanagan growing area in British Columbia where the industry stands to be adversely affected by the recent USMCA (United States-Mexico-Canada) trade agreement that ends exclusive grocery store shelf space for B.C. wines.

“Trade issues and legislative changes mean anyone can come in tomorrow with even one small change,” he said prophetically in September.

One of those big changes came in 1988 when the Canada-U.S. Free Trade Agreement was signed and it was feared Canada would drown in Napa Valley (California) wine. A pullout program, financed by the federal government, and permitted by the U.S., allowed growers to replace inferior grape varieties used to make sparking “pop” wines with European vinifera varieties to make better table wines.

At that time, he was in university taking a course in Agricultural Business and Economics with every intention of returning to the family farm armed with academic farm knowledge.

“My dad and I decided (then) it would be best that I consider another career, at least temporarily, until the dust settled,” he says. And he advises others to do the same. “I really don’t think I’d be so happy and appreciative today had I not done something else first.”

Related
Grape grower’s heart and soul is in the vineyard
Recognizing excellence in the direct farm marketing industry
New chair elected to Grape Growers of Ontario
Marketing Matters: It’s all about the on-farm experience
Tags